R lph Waldo Emerson is now remembered as one of the most important transcendental writers. Some of his best-known works are “Nature” and “Self-Reliance”. His other writings spoke out prominently on slavery and national identity.

‘Boston Hymn’ is an unusual poem that is written from the perspective of God. He takes an authoritative tone while he calls out to the American people. God tells them that they need to consider the paths their lives are on. It was first published in January of 1863 in Dwight’s Journal of Music.

‘Give All to Love’ is a wide-ranging piece that discusses everything in the world. The speaker discusses the existence and its facets. This includes anyone you have known and everything you have done. Love, he decides, is the great determining factor of life. It is “god” and the “master”.

‘Brahma’ is named for the Hindu god of creation and he is the speaker of the poem. Brahma expresses beliefs associated with Hinduism and Confucianism. He also represents himself as the center of the universe. The poem has direct connections to the basis of transcendentalism.

‘Terminus’ is the poet’s meditation on his own death. it was written when Emerson was older and considering his life span. There are connections in the poem to the Roman God of Boundaries, Terminus, and what insights this god might have for the poet.

‘The Rhodora” is one of Emerson’s best-loved poems. It also uses the subtitle “On Being Asked, Whence Is the Flower?” In it, the world is illuminated by a rhododendron. It allows the speaker to see the woods through which he is walking clearly. He knows that the flower is his kind, as are the rest the forms of life around him.

Ralph Waldo Emerson was born in Boston, Massachusetts in May of 1803. He was the son of Ruth Haskins and Reverend William Emerson, a Unitarian minister. His ancestors were almost entirely English and had been living in New England since the colonial period. Emerson was the second of five sons who survived into adulthood. Three of his brothers died while they were still children. When Emerson was only seven, his father died of stomach cancer. This meant that he and his siblings were raised by their mother, with help from other female family members.

Emerson’s formal schooling began when he was nine years old at the Boston Latin School in 1812. When he was fourteen he went to Harvard College and quickly became the messenger for the president of the institution. While Emerson was not an exceptional student by any means, he did work hard throughout his schooling to pay his tuition. The young man often had to take on jobs as a teacher and waiter. He also served as “Class Poet” and was responsible for presenting an original poem on Harvard’s Class Day when he was eighteen years old.

A few years after graduating Emerson became ill and decided to move to the warmer climate of Charleston, South Carolina. He was not content with the weather there and moved further south to Florida. It was here he began to seriously write poetry and first came into contact with slavery.

In 1827 Emerson met his first wife, Ellen Louisa Tucker, in New Hampshire. They were married as soon as she turned eighteen. The couple moved to Boston so that Ellen could help take care of Emerson’s ailing mother, Ruth, who had contracted tuberculosis. Emerson was ordained in 1829 and served as the junior pastor of Boston’s Second Church. He was also the chaplain of the Massachusetts legislature and a member of the Boston school committee.

These years were also marked by personal tragedy for the young poet. His young wife died in 1831 at only twenty years old and his brothers Edward and Charles both died of tuberculosis in the mid-1830s. After the death of his wife, he began to take exception to organized religion. He found his profession antiquated and eventually resigned in 1832.

In the early-1830s he toured Europe and wrote the account, English Traits, published in 1856. He spent time in Rome, Florence, and Venice as well as Paris and England. While in England he met Thomas Carlyle, Samuel Taylor Coleridge, and others. He returned to the United States in 1833 shortly before he began his series of over 1,500 lectures. One of these was titled, “The Uses of Natural History.” It elaborated on his travels in France and set out beliefs that would later be published in his essay, “Nature.”

1835 saw him become engaged to Lydia Jackson. The two bought a house in Concord which is now known as the Ralph Waldo Emerson House. He was soon regarded as one of the leading citizens of the town. Around this same time, he formed the Transcendental Club which held meetings in Concord. “Nature” was published in September of 1835 and a year later he delivered his address, “The American Scholar.

In 1841 he published the essay “Self-Reliance” which has since become one of his most popular. In the late 40s, Emerson toured around the British Isles and France where he continued his popular series of lectures.

The later years of his life were marked by travels out into the Adirondacks in order to become closer to the nature he was writing about. He was among friends, including James Russel Lowell and William James Stillman. They traveled by steamboat, stage catch, and canoe. Their adventures were cataloged for the papers of the day. The trip became known as a landmark of the 19th-century intellectual movement.

The publication of The Conduct of Life, his seventh collection of essays, saw Emerson take a stand on some of the most controversial issues of the day including slavery and national identity. After Henry David Thoreau died in 1862, Emerson gave the eulogy. He has often been regarded as Thoreau’s closest friend. He was also present at Nathanial Hawthorne’s funeral in 1864. The poet and essayist were elected a Fellow of the American Academy of Arts and Sciences in 1864.

After suffering from health problems since the early 1970s, Emerson contracted pneumonia which proved fatal in April of 1882. He is buried in Sleepy Hollow Cemetery, Concord, Massachusetts.

Explore poetry by Ralph Waldo Emerson below, analyzed by the team at Poem Analysis. 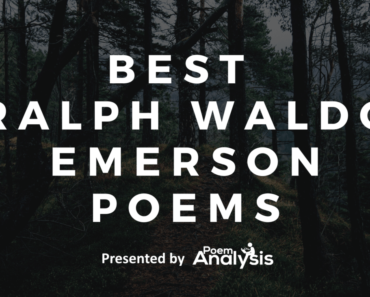