Richard Lovelace was born in December of 1617. His exact birthplace is unknown, but it was likely either Woolwich, Kent, or Holland. His parents were Sir William Lovelace and Anne Barne Lovelace and he had four brothers and three sisters. The family-owned a great deal of property in Kent, due to their distinguished history. His father was a member of the Virginia Company and died when Lovelace was nine years old. He was fighting in the Siege of Groenlo during the war with Spain and the Dutch Republic. 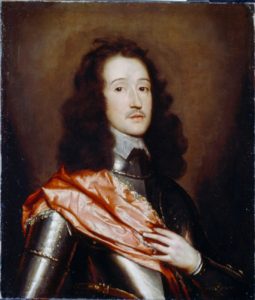 When he was a young man Lovelace attended Sutton’s Foundation at Charterhouse School, which was at the time in London. He was there for five years, likely as a “boarder” rather than an actual scholar. In 1631 he paid a fee to become a Gentleman Wayter Extraordinary to Charles I. Three years later he went on to attend Gloucester Hall, Oxford. He was thought of as an amiable person who showed a great deal of modesty and courtesy. In 1635 he wrote the comedy, The Scholars. He received his MA a year later.

His education continued at Cambridge University. It was while he was there that he printed his first poems which commemorated Princess Katharine. In 1641, after serving as a senior ensign and then a captain in the Bishop’s Wars, and spending time living in the countryside, he and a group of men seized and destroyed a petition for the abolition of Episcopal rule.

This action, along with his presentation of a pro-Royalist petition the next year, ended with his imprisonment. He spent time in the Gatehouse Prison which adjoined Westminster Abbey. He was released a short time later. It was during this time period he wrote ‘To Althea, from Prison.’ By this time he had also written the poems,  ‘The Scrutiny’ and ‘The Rose.’

In 1648, he was imprisoned once more, this time for almost a year. By the time he was released the king had been executed and his cause seemed lost. He then sold all of his family’s property and portraits. Lovelace died in 1657 and was buried in St Bride’s Church in the City of London. After his death, Lucasta, Posthume Poems was published.