‘Persephone, Falling’ was published in Mother Love in 1996. The poem takes its title and some of the content from the story of Persephone and her mother Demeter. This Greek myth describes how the former is abducted by Hades and forced to come to live as his bride in the underworld. Her mother, Demeter, tries unsuccessfully to find Persephone. Eventually, with the help of Zeus, it is decided that Persephone can spend six months in the underworld and the other six months with her mother. Her return to earth is described as the coming of spring and the end of the winter period.

When reading this poem it is possible to stick to the surface level information, about Persephone, Hades, and Demeter. But, there is more to it than that. Dove is also talking about the nature of mother-daughter relationships. That which exists between the two characters in this poem is difficult. The daughter is clearly seeking the freedom that her mother is uncomfortable with. This is seen through her desire to find that “one” perfect flower and to “pull” it out of the ground. Dove uses repetition to emphasize these two words. 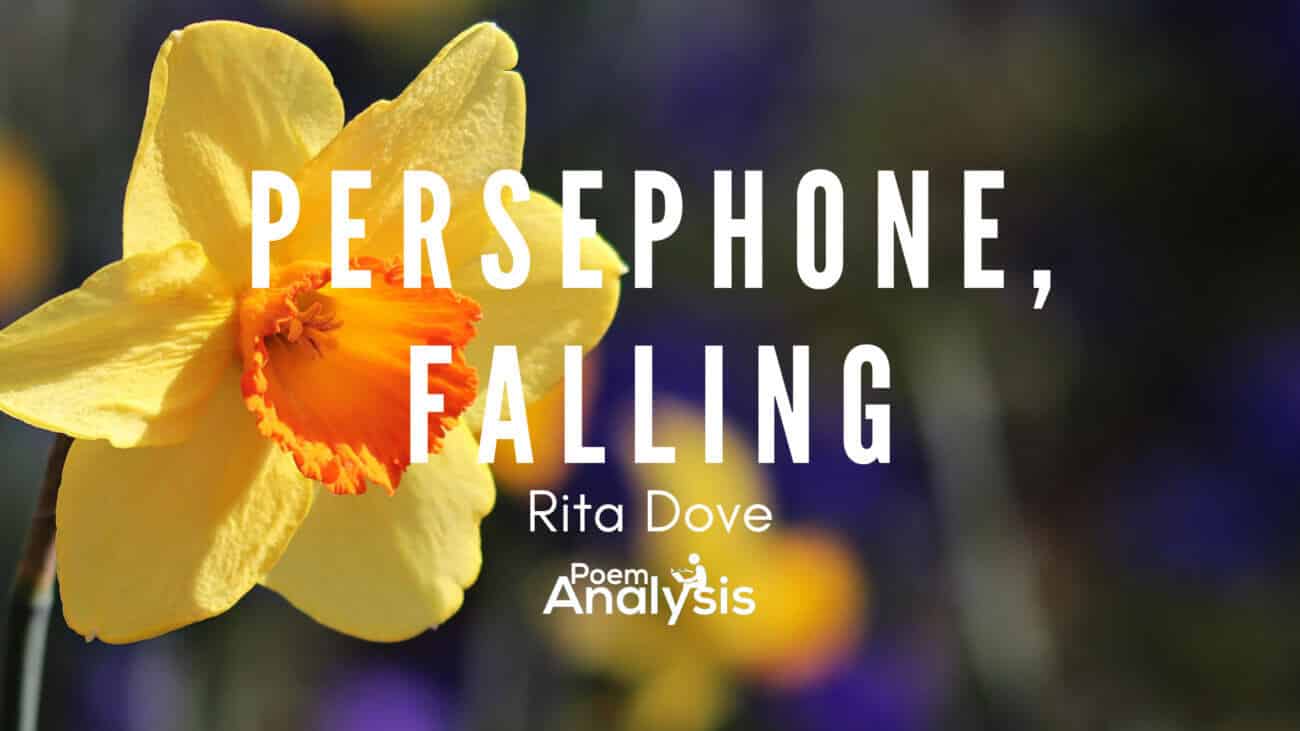 ‘Persephone, Falling’ by Rita Dove discusses the complexities of mother/daughter relationships through the story of Persephone and Demeter.

Throughout this short poem, the reader is asked to consider the kind of relationship these two had and how it influenced Persephone’s fate. In the first stanza, the speaker describes what happened to the young girl while she was pulling flowers, and in the second Demeter relays the advice that Persephone did not follow.

‘Persephone, Falling’ by Rita Dove is a two stanza poem that is separated into one set of eight lines and one of six. This format, despite the divide, makes ‘Persephone, Falling’ a sonnet. There is a clear turn, or “volta” between the two stanzas (the octet and the sestet). But, unlike most sonnets, this one does not make use of either of the most traditional rhyme schemes or metrical patterns, it is written in free verse. Dove chose to only use half-rhymes in the poem. For example, in lines seven and eight “her” and “her” as well as “around” and “down” in lines ten and twelve.

Dove makes use of several literary devices in ‘Persephone, Falling’. These include but are not limited to caesura, imagery, and allusion. The latter is one of the most important in the poem. Without it, a reader would not be able to understand the mythological undertones of the story. Imagery is another very clear and poignant technique at work. Readers can look to the first few lines as well as the depiction of Hades jumping out of the “glittering terrible / carriage” as examples.

Last, caesura, occurs when a line is split in half, sometimes with punctuation, sometimes not. The use of punctuation in these moments creates a very intentional pause in the text.

There are several good examples of this in the second stanza. Each of the pauses that accompany a line help to influence the way that a reader understands the directions and the relationship between mother and daughter.

One narcissus among the ordinary beautiful

flowers, one unlike all the others!  She pulled,

No one!  She had strayed from the herd.

Unfortunately for Persephone, she was alone when this happened to her. No one saw that she was kidnapped nor who kidnapped her. This alludes to the next part of the story in which Demeter, her mother, searches for her but is unable to find her.

This is important, stop fooling around!

opens.  This is how one foot sinks into the ground.

In the second stanza of ‘Persephone, Falling’ the poem transitions into the sestet. There is a very clear turn between these two stanzas. This technique is known as the “volta” in Italian and refers to any shift in the poem’s form, speaker, or content. In this case, the speaker, within parentheses, is Demeter. These lines relay the various things that Demeter has told her caught Persephone. She sought to keep her safe and if she’d followed these rules then she would’ve been.

There are several examples of caesura in these lines as the speaker, Demeter, tells her daughter what to do. She has to “stop fooling around” and stop talking to ‘“strangers”. Most importantly in this situation, she was supposed to stick with her playmates. It was only because she was alone that Hades was able to grab her.

Demeter refers to the “pit” which is a very common euphemism for Hell. But, in this case, it also works as a metaphor for any terrible thing that might befall a young girl alone. The “pit” is what is to be avoided. It is everything dark and dangerous. If she slips up for even a minute her “foot” will “sink…into the ground” and she’ll be lost. Just like the previous line, this one alludes to what actually happened to Persephone as well as a more general loss.