Roald Dahl was born in Llandaff, Cardiff, Wales in September of 1916. His parents were Norwegian and had emigrated from Sarpsborg in the 1880s. The couple married in 1911 and Dahl was born five years later. His name was chosen in honor of the explorer Roald Amundsen.

Dahl’s early life was marked by tragedy with the death of his sister, Astri, when she was seven years old. His father died only weeks later of pneumonia. Rather than taking her children back to Norway, Dahl’s mother chose to remain in Wales in order to give her children the best possible education. The young boy attended the Cathedral School in Llandaff where he developed a reputation for mischief. He was eventually transferred to a boarding school in England called, St Peter’s in Weston-super-Mare. 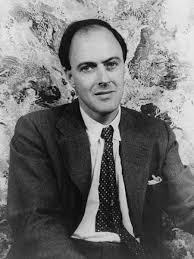 Dahl did not enjoy his time at St Peters. He yearned for home but kept his sadness to himself in order to not upset his mother. By the time he was 13 Dahl was experiencing the cruelty of other children at the Repton School in Derbyshire. He was mistreated by the other students and often suffered from beatings. His time at the school was extremely impactful. It would imbue him a deep-seated hatred of corporal punishment and even cause him to question religion and God. In regards to his academics, he was not known as a very good writer. He did excel at sports though, due in part to his height.

His time away from school was mostly spent with his family. He chronicled his happiest and most desperate times in the book, Boy: Tales of Childhood. It is thought that experiences with a local chocolate factory during this time period were the inspiration for his third children’s book, Charlie and the Chocolate Factory.

Once his schooling was over Dahl traveled to Newfoundland where he hiked alongside the Pub Schools Exploring Society. He then got a job with the Shell Petroleum Company and was assigned to Mombasa, Kenya, and then later Tanzania.

During the years of WWII Dahl was commissioned by the British army to lead a platoon of men. They were tasked with rounding up Germans living in Dar-es-Salaam. He later joined the Royal Air Force. On one particularly unfortunate night, Dahl was unable to land his plane and crashed in the desert. This experience also made it into his first published work, “A Piece of Cake,” a storytelling of his adventures in wartime.

His first children’s book was published a year later title, The Gremlins. Dahl’s military career was not yet over, he would go on to take part in a number of air battles, such as the Battle of Athens. He was eventually brought home where he accepted an offer as assistant air attache at the British Embassy in Washington, D.C. While in America he met C.S. Forester with whom he collaborated on a short story. He later came to know Ian Fleming and David Ogilvy. Roald Dahl’s work led him to supply intelligence from Washington to then Prime Minister Winston Churchill. When he finally left the RAF in August of 1946 he was ranked as a squadron leader.

In the years after the war, Dahl married Patricia Neil. Together they had five children and were married for 30 years. Although he is known as a children’s author today, some of the stories for which Dahl was known at the time were written for adults. They were macabre in nature and brought him three wins of the Edgar Award. One such work was “The Landlady.” Over his lifetime Dahl wrote more than 60 short stories which have appeared in a number of his own collections and broader anthologies.

In the 60s his work began to appear on film when his story “Man from the South” was filmed for Alfred Hitchcock Presents. The 60s also saw tragedy reenter into Dahl’s life. This included the death of his daughter Olivia from measles. His book, The BGF, published in 1982, was dedicated to her memory. In 1965, Dahl’s wife, Patricia, suffered three cerebral aneurysms while pregnant. Shortly before the couple divorced in 1983, their life was dramatized in The Patricia Neal Story.

Dahl soon remarried and was appointed Officer of the Order of the British Empire, an honor he turned down. He died in November of 1990 at the age of 74 from cancer. He was buried in the cemetery at St Peter and St Paul’s Church in Buckinghamshire. To this day children visit his grave and leave toys and flowers. Roald Dahl is remembered as one of the greatest writers of children’s literature of the 20th century. His books have been published in nearly 60 languages and have sold over 250 million copies.

“Curiosity killed the cat” is an English proverb. It describes the dangers of being too curious.
Full Description | Glossary