Robert Bridges was born in Walmer, Kent, England, in October of 1844. His father died in 1853, and after his mother remarried, the new family moved to Rochdale. His family was a part of the upper class, and were able to provide their son with the best education their money could provide. 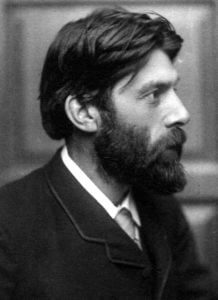 He began his education at Eton College, studying there from 1854 to 1863. He later moved on to Corpus Christi College, Oxford, where he met poet, and lifelong friend, Gerald Manley Hopkins. After graduating he traveled to London to study medicine at St Bartholomew’s Hospital. He was a student there from 1869 to 1874, but only practiced casually, spending most of his time teaching medicine, after receiving his license. In 1882, he was forced to retire from this career. It was then that he chose to devote himself to literature.

His first collection of poetry, The Growth of Love, was originally published in 1876, and it was not until 1883 that his second volume, Prometheus the Firegiver, was released. The following year he married Mary Monica Waterhouse, and then moved to Yattendon, Berkshire, where he lived in seclusion with his wife. The family later moved to Boar’s Hill,  after Mary, and their daughter, Margaret, became ill. It was here that he completely devoted himself to his poetic pursuits.

In 1913, Bridges was made poet laureate, but his works were still not in the mainstream, a fact that he would struggle with until months before his death. His two most popular, and career-defining works, were Shorter Poems, first published in 1890, and New Verse, many years later, in 1925. These two works were seen as being highly experimental. They were based on a new technique of metrical manipulation that relied on the syllables rather than the accents. This technique is seen most clearly in the long poem, ‘The Testament of Beauty,’ which was published in 1929. It was after the writing of this piece that he gained a significant amount of popularity.

After the realization of his new popularity, a number of his poems were set to music by well known British composers, and the worth of his other non-verse works was realized.

Robert Bridges died six months after the publication of ‘Testament of Beauty,’  he was 85 years old.