As the first two stanzas of ‘Memorabilia’ suggest, this piece springs from an encounter that Browning had with someone who met Percy Bysshe Shelley, the now very famous Romantic poet. Browning was too young to have ever met the poet or truly appreciate his work while he was alive and Shelley died in a terrible accident when he was young. Therefore, this chance meeting that he had made quite an impact on the poet. Browning uses his poem to discus this encounter, the man’s reaction, and use it to analyze his feelings about the whole situation.

The title is part of Browning’s considerations of his encounter. The man he met, who met Shelley, is linked to a physical memory of Shelley that Browning would himself never experience. 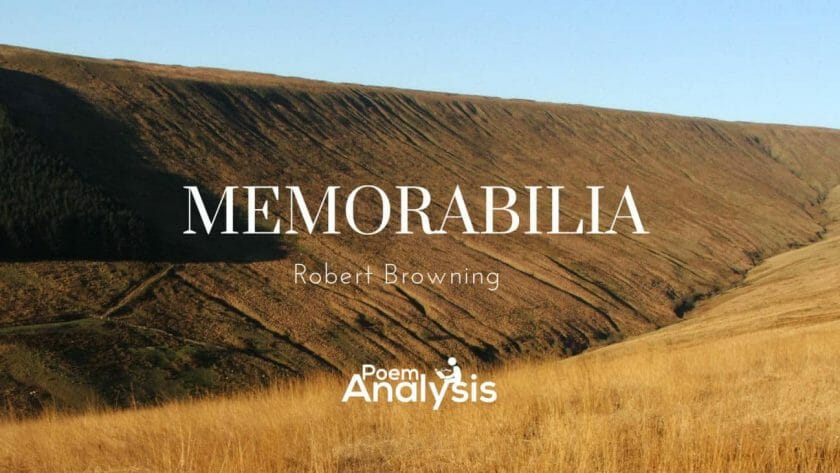 ‘Memorabilia’ by Robert Browning uses an extended metaphor to discuss a chance encounter with a man who met Shelley.

In the four stanzas of ‘Memorabilia’, the poet describes meeting someone who met Percy Bysshe Shelley and how that experience affected him. He compares it in the third and fourth stanzas to wandering a moor and coming upon an eagle feather. It is only a small portion of a memory that isn’t even his own.

In ‘Memorabilia’ Browning makes use of several interesting themes including memory, nature, and time. Throughout the poem the poet longs for more information about and closer contact with a man who met the great Romantic poet Percy Bysshe Shelley. The man can’t understand his excitement as for him its a distant memory. but, for Browning, the meeting is the closest he’s ever gotten to a time and place that he’d love to be. The other man was physically in Shelley’s presence, something that Browning will never get to experience. In order to depict how meaningful this is, and then the lack of resolution or emotional peak it inspires, he uses a nature-based metaphor

‘Memorabilia’ by Robert Browning is a four stanza poem that is separated into sets four lines, these lines follow a simple rhyme scheme of ABAB, changing end sounds from stanza to stanza. Just as consistent as the rhyme scheme if the metrical pattern. The lines conform to what is known as iambic terameter. This means that each line contains four sets of two beats. The first of these is unstressed and the second is stressed.

Browning makes use of several literary devices in ‘Memorabilia’. These include but are not limited to anaphora, metaphor, and imagery. The last two are connected as they help make up Browning’s nature-based depiction of what this meeting means, and doesn’t mean, to him. In the third and fourth stanzas, Browning uses an extended metaphor to compare the meeting with the man who met Shelley to the discovery of an eagle feather while walking on the moor. The feather is the only point of interest on the moor but even it, in the end, is only a symbol. It means nothing.

Anaphora is a useful device that’s used in the first two stanzas in order to convey the poet’s excitement. It can be seen through the use and reuse of the word “And” at the beginning of multiple lines.

Ah, did you once see Shelley plain,

And did he stop and speak to you?

And did you speak to him again?

How strange it seems, and new!

In the first stanza of ‘Memorabilia,’ the speaker lays out quite clearly the nature of a meeting he had. He is speaking to a man, someone who (very luckily in Browning’s mind) met Percy Bysshe Shelley. He asks the man questions, trying to confirm that what he said is true, that he did indeed meet Shelley. It seems strange to Browning that he could come across someone with this experience and from the emotion in the poem it’s clear that this encounter caught him off guard.

But you were living before that,

And you are living after,

And the memory I started at—

My starting moves your laughter!

The second stanza of ‘Memorabilia,’ continues Browning’s excited speech. It’s very obvious that he’s thrilled to be meeting this person and even goes so far to marvel over the fact that this man was alive before he met Shelley and is alive still now. In his excitement, this seems amazing to him.

The last line, from the poet’s perspective only, lets the reader know that the man Browning met is amused by the poet’s response to him. He laughs at Browning’s excitement, something which surely catches him off guard. The poet knows that there might be others who feel amused at his reaction. The third and fourth stanza tries to depict for the reader what this encounter was like for him.

I crossed a moor, with a name of its own

And a certain use in the world no doubt,

Yet a hand’s-breadth of it shines alone

‘Mid the blank miles round about:

The third stanza starts the extended metaphor that compares the meeting Browning had with a man who’d met Shelley to his discovery of an eagle feather. Browning describes walking on a moor with a name and purpose in the world (representing meet the man). There, a small part of it shines brighter than any other. The rest, to the poet anyway, is blank and uninteresting. It is this “hand’s-breadth” that represents the part of the man’s life that Browning cares about, his meeting with Shelley.

For there I picked up on the heather

And there I put inside my breast

A moulted feather, an eagle-feather—

Well, I forget the rest.

IN order to represent this part of this man’s life better, Browning describes walking the moor and finding an “eagle-feather”. It is a marker of a grand bird that was once there but is no longer, just as the man’s memories of Shelley are a marker of the great poet himself. In the metaphorical walk, Browning picks up the feather and puts it “inside” his coat pocket.

The poem ends there, without any type of revelation or emotional peak. Instead, it drifts off with nothing else left to say. This was a very intentional choice by Browning, used to represent the difference between knowing someone and experiencing something real and only getting to come into contact with the remnants of an experience.

For readers who are interested in reading more poems that speak on similar topics, or use comparable themes or imagery there are numerous examples of verses to explore. Percy Bysshe Shelley’s ‘Ode to the West Wind’ is a great example of how the mundane, such as a walk on a moor or a chance meeting, can provide inspiration. Other poems like ‘This Lime-Tree Bower My Prison’ by Samuel Taylor Coleridge and ‘In Praise of Limestone’ by W.H. Auden use nature imagery in a similar way.