The Patriot by Robert Browning

Robert Browning’s poem ‘The Patriot’ is a tragic tale of a man who fell from being a star citizen to becoming despised so intensely that he was put to death.

The entire poem is based on irony as the people who once used to revere the man and put him on a pedestal became the same people who deserted him and even killed him at the end. The Patriot is divided into six stanzas, each of which is a different chapter of the Patriot’s life. 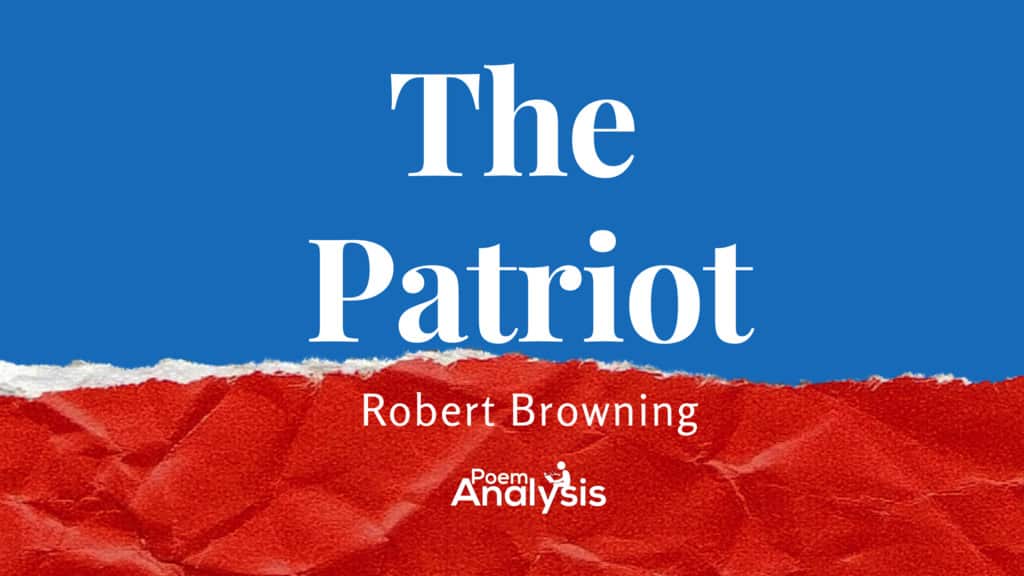 ‘The Patriot’ by Robert Browning is a tragic, dramatic monologue about a man who dedicated his entire life to supporting his country.

The poem is heavy with irony as it describes a man who had given everything up for his people and was initially revered by them, only to be killed at their hands without a second thought in the end.

In ‘The Patriot’ Browning explores themes that include duty, happiness, and sorrow. The extremely fickle opinions of the citizens of this area change the Patriot’s life form one of celebration to one of sorrow. The man is welcomed with adoring and an obsessively reverential celebration but soon things change. IT no longer matters the lifetime he spent in dedication to his country. Everyone and everything turns on him. Eventually, he’s killed and no one is even there to watch.

‘The Patriot’ consists of six stanzas which are interestingly divided by numbered headings, almost as if Browning was telling us that each stanza is a chapter in the Patriot’s life. The first three stanzas or chapters reflect the feelings and accomplishments the Patriot underwent and the last three chapters describe his unfortunate sentencing and his death. The Patriot also has a Sub-heading titled ‘An Old Story’ this is much like the title of a novel. The Presence of a sub-heading supports the idea that Browning designed his poem to be read as a story, in which each stanza is actually a chapter.

Browning uses the poetic devices of irony, metaphors, imagery, and alliteration to show the reader the uncertain nature of society. Society is very dynamic in the people they choose to support. Entire nations can switch sides instantaneously without care or worry about what happens to those they left behind. Repetition is seen through the way that Browning uses and reuses words like “roses” as well as in other techniques like anaphora.

Alliteration is another interesting technique that’s seen through the repetition of consonant sounds at the beginning of words. For example, “myrtle mixed” and “mud” in line two of the first stanza as well as “flamed” and “flags” in line four of that same stanza.

It was roses, roses, all the way,
With myrtle mixed in my path like mad:
The house-roofs seemed to heave and sway,
The church-spires flamed, such flags they had,
A year ago on this very day.

The first stanza is a description of the Patriot’s feelings towards his country, or perhaps to his religion as the church is mentioned near the end of the stanza. Browning uses a metaphor saying ‘it was roses, roses all the way’, in which he is describing elated feelings of love, dedication, and happiness through the word roses. The Patriot is euphoric toward his Country, he is full of energy and he sees everything with life and energy, even the houses and church spires. The last line of the stanza tells us that this energetic time of the Patriot’s life is not the present, but rather something that occurred a year ago.

The stanza can also be taken literally, and in that case, it could mean that when he first arrived in this country people had thrown flowers at him, and everyone had been out cheering for him in excitement, urging him on to make their country proud. Alliteration is seen in this stanza with Myrtle-mixed-my-mad and flames-flag.

The air broke into a mist with bells,
The old walls rocked with the crowd and cries.
Had I said, “Good folk, mere noise repels—
But give me your sun from yonder skies!”
They had answered, “And afterward, what else?”

The second stanza is not very clear in its meaning, but it appears that this is the chapter of the Patriot’s life where he is a hero. Everyone is willing to do all that he asks for, even if he had asked for the sun they would give it to him and still ask him what else he would like. Browning uses imagery to describe a very festive environment, with bells ringing and walls swaying with the crowds and cries. This shows us that the Patriot was really seen as some sort of hero to his people.

Alack, it was I who leaped at the sun
To give it my loving friends to keep!
Nought man could do, have I left undone:
And you see my harvest, what I reap
This very day, now a year is run.

The third stanza is no longer festive as it begins to reveal the reality after all the initial hype. The people had only been speaking words and pretending to revere this Patriot because in actuality it was really him who had to leap for the sun. Leaping for the sun is another way of trying to achieve the impossible. The ancient Greek myth of Icarus is a good way to explain this analogy. Icarus is known for having attempted to fly to the sun, but the closer he got his wings (which were attached by wax) melted off him. This is relevant to the Patriot because he seems to have been over-ambitious, and in doing so it caused him to fall a dreadful height. He states that he did the impossible, what no man can do, that all his rewards are clear for everyone to see, but what has happened now?

There’s nobody on the house-tops now—
Just a palsied few at the windows set;
For the best of the sight is, all allow,
At the Shambles’ Gate—or, better yet,
By the very scaffold’s foot, I trow.

I go in the rain, and, more than needs,
A rope cuts both my wrists behind;
And I think, by the feel, my forehead bleeds,
For they fling, whoever has a mind,
Stones at me for my year’s misdeeds.

The fourth and fifth stanza is where he reveals, quite shockingly that he has completely fallen. There are no more people looking out for him or cheering him on. The only people who come to watch him are the palsied few, which obviously refers to those lowest in society, sick and old with nothing better to do than watching him at the Scaffolds foot, which is a raised wooden platform in which people are executed. He describes the rope cutting his hands and bleeding because of the process of his execution, and quite interestingly he mentions that those with mind whip stones at him for his year’s misdeeds.

We know from the previous stanzas that the patriot had done literally everything in his power to satisfy his people, he had many accomplishments under his belt, but he was still being executed at the end. He may be using sarcasm here by stating that those with a brain were hating on him even while he was being hung or he may be stating how everyone else was so idle and ignorant, so forgetful and static that at least those who threw the rocks at him had some sort of passion, some sort of understanding, whether right or wrong, for why they were watching him die in the first place. The Patriot mentions that he walks in the rain as he’s going up to be executed.

This could be literal rain, creating a mood of depression and dismay. This rain could also be metaphorical; referring to him being cleansed of his desire to please people and cleansed of sin before he died because his execution was completely unjust,

Thus I entered, and thus I go!
In triumphs, people have dropped down dead.
“Paid by the world, what dost thou owe
“Me?”—God might question; now instead,
‘Tis God shall repay: I am safer so.

The sixth and final stanza refers to the chapter of death in the Patriot’s life. He feels himself die and as a final thought occurs to him, he is not sacred or full of hate, but rather he is pleased and even relieved that at least now he is going to God, who will judge him justly. God sees all and knows all, unlike human beings who react to only what their limited knowledge allows them to understand.

This final stanza also brings forward the point that this entire story could have been about a man, patriotic to his religion, who gained a respectable position in the church and society but he began to question his religion and in doing so underwent great lengths in order to find out more about other religions, and people saw him as an apostate and had him hung. However, Browning’s mentioning of triumphs in this stanza makes it most likely that this was the story of a hero of a Country who was forgotten and then killed.

Readers might also be interested in other poems like ‘The Soldier’ by Rupert Brooke, ‘The Death Bed’ by Siegfried Sassoon, and ‘To a Child‘ by William Wordsworth. These three poems touch on what it means to serve, on paper, and in reality.

Another interesting poem to read would be O What is that Sound? by W.H. Auden. It is difficult in The Patriot to get an idea of what time frame this poem was from, making clear the message throughout the poem applies to not a specific time, but universal in nature. A similar message is relayed in O What is that Sound?, where Auden purposefully is vague, so that the tragedy of war is related, regardless of the time it is representing.

Maha has a BSc Honors from the University of Toronto and is an Author and Writer by profession. She loves writing and genuinely idealizes the idea of science and literary art combining together into a liberating force of intellectual enlightenment. You can check out her YA novel 'Sole Silence'.
Subscribe
12 Comments
Newest
Oldest Most Voted
Inline Feedbacks
View all comments