Robert Forst depicts two different types of men in ‘Christmas Trees,’ one who wants to buy Christmas trees and the other who debates selling them.

The owner of the trees is the main character in the poem and the person who spends the text writing a letter to his friends. The poem has been called a playet, or a short play. This makes sense with the clear, direct setting and the two characters interacting. Although it seems quite simplistic, there’s a lot that one might read into their interaction. 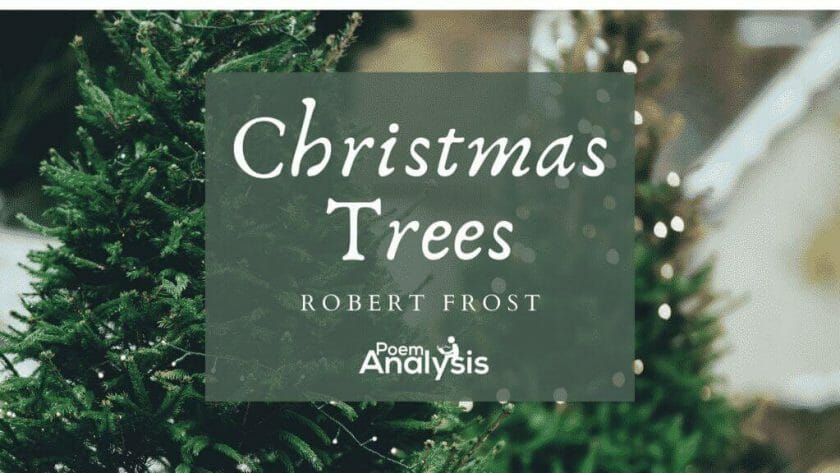 ‘Christmas Trees’ by Robert Frost depicts an interaction between a man with a thousand Christmas trees and a salesman who wants to buy them.

The poem is fairly straightforward. It starts out with a description of a man who came to visit the speaker’s home. There, he inquired about the Christmas trees in the pasture behind the house. The speaker was surprised about this as he’d never thought about the trees that way. He tells the man he doesn’t want to sell them, but he then ends up humoring the city-dweller for a time as he counts the trees and comes up with an offer. He’s willing to pay 30 cents per tree and buy all 1,000 trees the speaker has. This is quite a low number the tree owner thinks and decides then and there that he’s not going to sell them.

In ‘Christmas Trees,’ the poet engages with themes of consumerism and city life versus country life. From the start, the reader is made aware of the difference between the man writing the letter, who owns the Christmas trees, and the man who has come from the city to buy them. The latter is interested in making a profit, while the former cares about his trees in a different way. He values their presence on his land as trees, not as objects to be sold and resold. Through the steps of this narrative, the poet makes it clear that he’s on the side of the tree-owner who wants to keep his trees and preserve their value.

‘Christmas Trees’ by Robert Frost is a five-stanza poem that’s separated into uneven stanzas. The first is the longest, at thirty-one lines, the second is eleven lines, the third: one line, the fourth: two lines, and the fifth is sixteen lines long. Frost uses two speakers in ‘Christmas Trees’ and does not employ a septic rhyme scheme or metrical pattern, even though the lines are quite similar in length.

Frost makes use of several literary devices in ‘Christmas Trees.’ These include but are not limited to alliteration, enjambment, and imagery. The first of these, alliteration, occurs when the poet uses the same consonant sound at the beginning of multiple words. For example, “lay” and “letter” in line fourteen of the final stanza and “seemed so small” in line three of the fifth stanza.

Enjambment is a common formal device that occurs when the poet cuts off a line before its natural stopping point. For example, the transition between lines one and two of the first stanza as well as lines sixteen and seventeen of the first stanza.

Imagery is one of the most important literary devices in this poem. It occurs when the poet uses fascinating and memorable descriptions that help paint the scene. For example, “When between whirls of snow not come to lie / And whirls of foliage not yet laid” from stanza one and “Where the sun shines now no warmer than the moon” in the same stanza.

The city had withdrawn into itself

When between whirls of snow not come to lie

And whirls of foliage not yet laid, there drove

Where houses all are churches and have spires.

I hadn’t thought of them as Christmas Trees.

In the first lines of ‘Christmas Trees,’ the speaker begins by describing the year, winter right before Christmas, and his intention, to write a letter to his friends. It’s revealed that this man has trees in his yard, and a man who he knows is from the city turns up and wants to buy some of the Christmas trees to resell. Frost uses slightly complicated diction in these lines and messes with the syntax. Instead of saying “a stranger drove to our yard,” he writes, “there drove / A stranger to our yard.” This makes the poem feel more poetic while also complicating it slightly. This is an interesting juxtaposition against the relatively simple plot.

When the man asks if he can buy the “Christmas Trees,” the speaker states that he’d actually never thought of them that way. He wasn’t “tempted for a moment” to them them “go in cars” and then leave the slop bare behind the house.

I doubt if I was tempted for a moment

To sell them off their feet to go in cars

And leave the slope behind the house all bare,

Where the sun shines now no warmer than the moon.

I’d hate to have them know it if I was.

Yet more I’d hate to hold my trees except

“I could soon tell how many they would cut,

You let me look them over.”

It’s clear that the man cares deeply about these trees and their presence in his yard. The speaker spends the next lines thinking about the value of the trees and how it might benefit him to sell them. He “dallied so much with the thought of selling” that he eventually said that he didn’t think there were enough to make the man’s time worthwhile. Instead of agreeing, the man suggests that he look them over.

But don’t expect I’m going to let you have them.”

Pasture they spring in, some in clumps too close

We climbed the pasture on the south, crossed over,

And came down on the north. He said, “A thousand.”

In the second stanza, the tree owner tells the visiting city-dweller that he doesn’t think he’d ever let them go. Despite this, they head to the pasture, and the man explores what’s there. When he returns, he tells the speaker that he thinks there are a thousand trees on the lot. This is a large number, much larger than one likely expected from the speaker’s initial reticence. The value of them is up in the air considering the speaker’s depiction of them as lopsided and growing into one another. Others, though, appear “round and round.”

“A thousand Christmas trees!—at what apiece?”

“A thousand trees would come to thirty dollars.”

The next two stanzas are one line and two lines. The speaker’s shocked at the number and asks the visitor what he’d pay for each tree. Now, the speaker refers to them as “Christmas trees,” something that he’d never have done before.

The man offers him three cents for each tree, coming to a total of thirty dollars. It’s at this point. The speaker tells the reader in the next stanza that he knew he’d never sell them.

Then I was certain I had never meant

To let him have them. Never show surprise!

I should be writing to within the hour

Would pay in cities for good trees like those,

The thirty dollar offer seemed “so small” when he looked out over his whole pasture of trees. It seemed like too much work and too much loss for so little gain. Plus, the speaker knew that the tree salesman would sell each tree for a dollar later on.

Could hang enough on to pick off enough.

A thousand Christmas trees I didn’t know I had!

In wishing you herewith a Merry Christmas.

In the final lines of the poem, the speaker notes again how he didn’t realize how many trees he had. He also turns back to addressing his friends in a letter. He tells them that he’d like to lay one of his trees in the card and send it to them, rather than have them buy a tree for a dollar from a man such as his visitor.

Readers who enjoyed ‘Christmas Trees’ should also consider reading some of Frost’s other best-known poems. For example,