Robert Herrick was born in August of 1591 in Cheapside, London, England. He was the seventh child of parents Julia Stone and Nicholas Herrick. His father worked as a goldsmith and supplied a high quality of life for his family. When Robert Herrick was just over a year old his father died in a fall from a fourth-floor window. 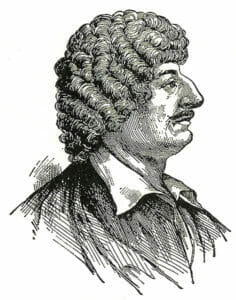 At sixteen the young boy began a ten-year apprenticeship with his uncle who was a gold and jewel-smith for the king. It only lasted for six of the years when Herrick entered Saint John’s College, Cambridge. He graduated from Trinity Hall in 1617.

The following years saw Herrick become a member of the “Sons of Ben,” or “Tribe of Ben.” A group centered around a mutual admiration for the poet Ben Jonson. Johnson is known for his verses, essays, and dramatic works— such as Every Man in his Humour. Herrick would go on to write at least five poems directed to, or inspired by, Johnson.

In 1623 he took holy orders and then became the vicar of Dean Prior in Devonshire in 1629. His post held a thirty-one-year term but he was removed in the wake of the English Civil War. This was due to his refusal of the Solemn League and Covenant, an agreement between the Scottish Covenanters and the English.

At this point he returned to London, attempting to make a home in Westminster. He was in desperate need for assistance from his friends and family. It was during this time period that he began to prepare his poems for publication. They were printed in 1648 under the title, Hesperides; or the Works both Human and Divine of Robert Herrick. The work was dedicated to the Prince of Wales and contained 1200 short poems ranging in their form. He was deeply influenced by the English countryside and its particular customs.

Herrick was returned to his post as vicar of Dean Prior in 1662 after obtaining favour from King Charles II. This was due to the celebratory verse he wrote on the birth of Charles and his brother James prior to the Civil War. Herrick remained in Devonshire until his death at the age of 83. It is unclear when exactly he died, but he was buried in October of 1674.