‘Bearded Oaks’ was first published in Poetry magazine in 1937 and has steadily gained popularity since then. Robert Penn Warren was the first U.S. Poet Laureate and the only author to win a Pulitzer Prize for poetry and fiction. In total, he won three, two for poetry and one for fiction. He was part of a group known as The Fugitives. They chose to break away from the traditions they saw as sentimental and restraining. Instead, they advocated for reading poetry on its own terms and individual thought. 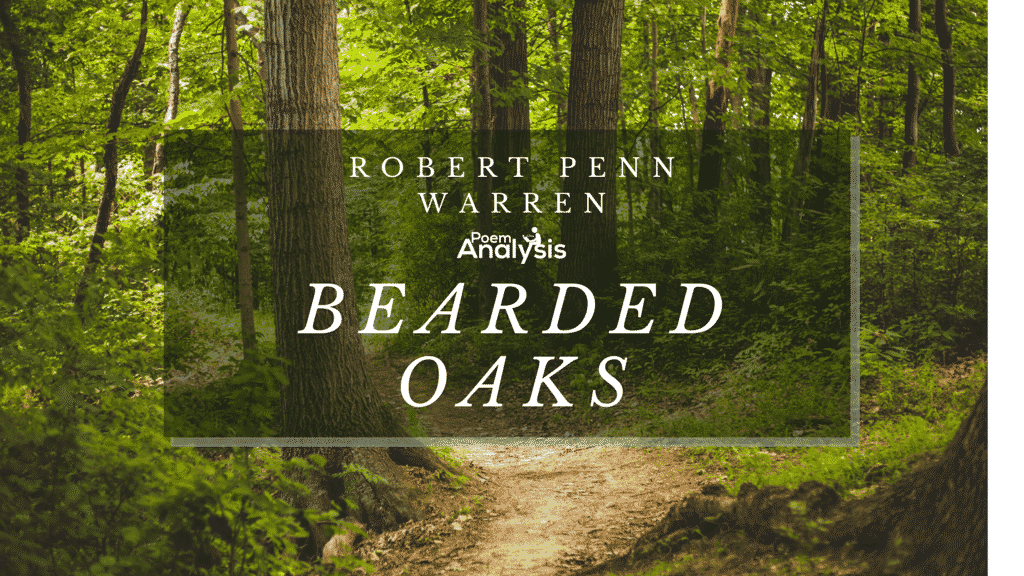 ‘Bearded Oaks’ by Robert Penn Warren is a complex, image-rich poem that describes an eternal moment between two lovers.

In the first part of the poem, Warren’s speaker depicts a scene of peace. Two lovers rest on the forest floor looking up at the sky and trees. The speaker focuses on the power of the marine-like sky above them and the forest floor below. As Warren put it, the two are laying in the forest after the sun goes down and it feels as “though the lovers were submerged in the water”. They are submerged in human history just as the coral is submerged beneath the ocean. The two are trapped in a small amount of time they have.

Time is one of the most important, and the clearest, themes in ‘Bearded Oaks’. Warren creates a world that is outside time in the ten stanzas of the poem. Here, two lovers exist in between darkness and light, experiencing a moment that is “practice for eternity”. The poem emphasizes a temporary stillness and “rest” between the two while also depicting the broader human experience as we all march inevitably towards the end of time.

Nature is another one of the crucial themes at play in ‘Bearded Oaks’. The “scene” that the poet sets is one that’s surrounded by nature on all sides. It is continually depicted as powerful, so much so that human history is erased in the face of it.

‘Bearded Oaks’ by Robert Penn Warren is a ten stanza poem that is separated into sets of four lines, known as quatrains. These quatrains start out rhyming in a simple ABAB pattern but that pattern soon dissolves into a series of full rhymes and half-rhymes sometimes rhyming ABCB and sometimes not rhyming at all. There is a certain amount of structure, but the variation appeared to be more important to Warren.

The same can be said for the meter. For the majority of the poem, the lines make use of iambic tetrameter. This means that the lines contain four sets of two beats, the first of which is unstressed and the second stressed.

Warren makes use of several literary devices in ‘Bearded Oaks’. These include but are not limited to imagery, alliteration, and enjambment. The first of these is an important formal device that is seen through the repetition of words with the sam constant sounds. For example “layered light” in line two of the first stanza and “swims” and “scene” in line three of that same stanza.

Enjambment is also a formal device that helps to control the pace at which a reader moves through a poem. There are a number of examples in this piece that help to build tension and suspense. For example, the transition between lines three and four of the fourth stanza.

Imagery is one of the most important techniques at work in ‘Bearded Oaks’. The best examples are those which require the reader to make use of several senses at one time in order to imagine a scene. Take for example this line from stanza five: “Dark is unrocking, unrippling, still”.

The oaks, how subtle and marine,

In the first stanza of ‘Bearded Oaks,’ the speaker begins by describing the oak trees directly. They appear to be submerged as if the sky above them is water. They are covered in moss, making them appear bearded as it hangs down towards the speaker onto the ground. The light swims above the trees like the surface of the ocean. The scene is “recessed,” as if it is waiting for something. In this case, the “positive night”. Throughout personification, the poet is able to depict the “scene” waiting. The night will come, eventually, and it will be a good thing, a positive and certain thing.

So, waiting, we in the grass now lie

The nameless motions of the air.

The second stanza of ‘Bearded Oaks’ brings another person into the scene. He is talking to and about his lover, someone who goes nameless. They are waiting, just like the rest of the scene is. They are under the “tread of light” (meaning it moves slowly and perhaps even sexually) that appears “languorous” in the sky (dreamily).

Warren uses more language in the next lines to suggest that the two are in a dream-like state, underwater in the forest. They’re somewhere unusual, somewhat magical, and certainly special. He refers to the “nameless motions of the air”. There is, as of yet, no name for the way the air moves

Upon the floor of light, and time,

Twin atolls on a shelf of shade.

The speaker and his lover are on the “floor” of the forest. It is described as a floor of “light, and time”. This gets into the heart of the poem, warren’s desire to depict a space that’s outside of time. This is a moment of love that is not restrained by the confines of space and time. The two are quite now, perhaps in a period of silence post-love making, no longer “murmuring”. They rest and are compared to “Twin atolls on a shelf of shade”.

In this stanza, the words “polyp” and “atolls” both refer back to the ocean. A polyp is part of coral and an “atoll” is a string of islands made of coral. The light, wave-like, move away and they are in the “shade”.

Ages to our construction went,

The present stillness all its power.

The speaker looks back into time to their “construction” or evolution. “Ages” have gone by and it’s still not entirely clear why this “architecture” has been built. The purpose is “Dim”. There is a clear emphasis on time here and then a transition into something surprising, violence, on the other side of the semi-colon. It’s not clear what exactly the poet is thinking about here but it is perhaps some kind of the root of violence at the heart of humankind or the creation of humankind. It’s in the past, “forgot now,” but the violence is still at the center. The “present” owes its peace to the past.

The storm of noon above us rolled,

In the fifth stanza of ‘Bearded Oaks,’ the speaker turns the reader’s attention back to the sky. He is continually moving up and down, observing the “scene” and bringing in more and more powerful imagery. There is a metaphorical storm coming in rolling “above us” in the sky. It is made up of “light the fury, furious gold”. It is shiny, brilliant, and powerful.

The word “drag” (as in the drag of the tide) in the third line could relate back to the sea imagery that is scattered throughout the poem. The dark is also the main focus of this stanza, the dark in “the depth”. It is “unrocking, unrippling”. This suggests that something is coming undone. Just as this dream-like imagery is being used, the poet is getting farther away from the original ABAB rhyme scheme.

Foundation for our voicelessness.

The darkness inherent in “violence” comes back, unsurprisingly, in the sixth stanza. He speaks of “Passion and slighter” as well as “decay”. This is the darkest, scariest imager so far. The worth “ruth” means sorrow, which pair with decay, makes a terrifying pair. The peace of the first lines is gone and this darkness is headed down towards the lovers. This is not the “positive night” that they were hoping for.

Bit by bit, “grain by grain” towards the two lovers. The negative things headed towards them are also whispering/murmuring. He can still hear/sense the negativity of the world as they lay there together. There is nothing the two of them can do against the onslaught of negativity. They are “voiceless” in the face of it.

All our debate is voiceless here,

And history is thus undone.

In the seventh quatrain of ‘Bearded Oaks,’ the speaker uses the word “voiceless” again. Their lack of agency is emphasized. Their “rage” is “stone,” and human experience is drowned out in the mass of time and space that has come before it and will come after. “History,” at least human history, is “undone” in the face of it.

(Our feet once wrought the hollow street

Disturbed the doe that, leaping fled.)

The eighth stanza of ‘Bearded Oaks’ is enclosed in parenthesis. They read as though they are an aside, something less integral to the larger poetic narrative playing out on the other side of the parenthesis. He describes how “we,” humankind, used to walk in a city, on the “hollow street” in the darkness. The “lamps were dead” and the car “headlight[s]” create a glare that disturbs a deer. The doe flees from humanity and its created light.

A caged and powerful heart features in the first line of the ninth stanza. It is strong and making “iron stroke,” a very forceful image. It is not particularly tender or romantic, although that would be expected considering the darkness of the previous stanzas.

Despite the lover’s hard, iron heart, the speaker does not love them any less than before now that what was given by light was “revoke[d]” by darkness. By using the word “graduate” to describe “darkness” in the fourth line the speaker makes it seem as though the darkness is getting worse. It is moving on to a new level.

We live in time so little time

To practice for eternity.

In the final four lines of ‘Bearded Oaks,’ the poet’s meaning comes through clearly. The syntax is much less confused in these lines which helps to make sense of the rest of the poem. He describes how “We,” the lovers and all of humankind, live in “time so little time”. The moment he’s been focusing on with the lovers on the forest floor is a brief respite from that. This “hour’s term” is “practice for eternity”. It is a moment outside of time.

This beautiful poem can be interpreted in different ways, but it is undeniable that time and humankind’s perception of time is important. While Warren speaks memorable on the subject, there are several other poems and poets which also accomplish something similar. For example, ‘Time, Real and Imaginary’ by Samuel Taylor Coleridge, ‘And Did Those Feet in Ancient Time’ by William Blake, ‘Triple Time’ by Philip Larkin, and ‘Never the Time and the Place’ by Robert Browning.