After Blenheim by Robert Southey

‘After Blenheim’ by Robert Southey is an anti-war poem of the Romantic Period. Southey, one of the lake poets, presents the hollowness and meaninglessness of war in this poem. The poet is against the Battle of Blenheim (1704) as well as the sentiment of the rulers behind any such war. He presents a layman’s perspective in the poem regarding the “famous victory” at Blenheim. 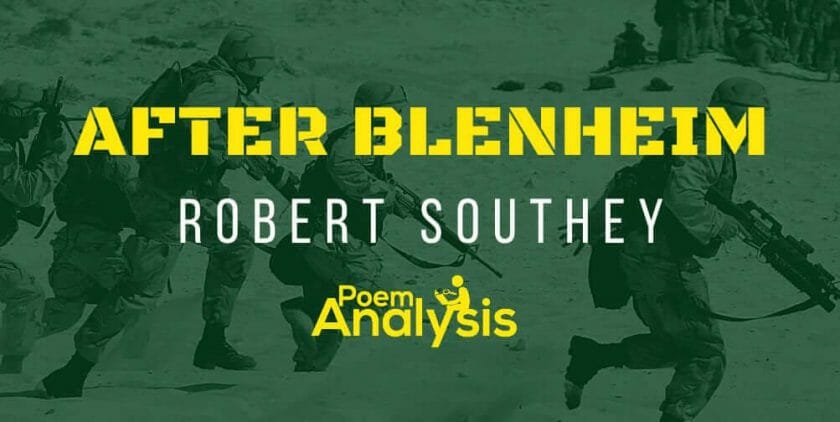 Summary of After Blenheim

In ‘After Blenheim’, Robert Southey ironically represents his view on the absurdity of the war from a layman’s perspective.

“Old Kaspar” is sitting before his cottage door after his day’s work. His grandchild Wilhelmine is playing near him. Suddenly she sees her brother Peterkin who is coming there with a skull in his hand. He has found the skull beside a rivulet. Kaspar takes the skull from Peterkin and starts to answer their questions about the war of Blenheim.

Kaspar’s answers reflect a common man’s perception of the war of Blenheim. The common people of England at that time didn’t know about the cause of the war. They could only tell that the victory of the English side was remarkable.

Structure of After Blenheim

The poem, ‘After Blenheim’ consists of 11 stanzas, containing 6 lines in each of them. So there are a total of 66 lines in the poem. The poem doesn’t have a specific rhyme scheme. Being a poem of the Romantic period it has such an unconventional structure. Readers are aware of the fact that Southey belonged to the group of “lake poets”, who shed off the old decorum and invented a new mode in writing poetry.

Literary Devices in After Blenheim

In the first stanza of ‘After Blenheim’, Southey uses metonymy in the line, “Was sitting in the sun”. It means that Kaspar was basking in the sun after his day’s work. In the next stanza, the poet uses hyperbaton in the following lines, “Which he beside the rivulet/ In playing there had found”. At the last line of this stanza there is a repetition of the conjunction “and”; it’s the use of polysyndeton.

Southey uses the phrases, “great victory” and “famous victory” at the end of most of the stanzas. It’s definitely an irony; for the sake of emphasizing his point he uses it repetitively. The poet uses hyperbole in the line, “For many thousand men…”, to bring attention to the killing of many innocent men during the Battle of Blenheim. “Wonder-waiting eyes” is an example of hypallage. Here the poet wants to say that little Wilhelmine is waiting in wonder to know more about the war from his grandfather.

Analysis of After Blenheim

It was a summer evening,

That was so large, and smooth, and round.

‘After Blenheim’ by Robert Southey, has a story-like structure. The conversational poem progresses smoothly with an internal rhyming pattern. The first two stanzas of this anti-war poem introduce the three main characters to the readers. They are Kaspar, and his grandchildren, Wilhelmine and Peterkin. At the beginning of the poem, the ambiance of the poem is calm and pastoral. Wilhelmine is playing in front of her grandfather and suddenly Peterkin enters into the plot with a large round thing in his hand. He doesn’t know what the thing is. He has playfully picked it up from a nearby rivulet and is returning home to ask his grandfather about it.

Old Kaspar took it from the boy,

“Were slain in that great victory.”

Old Kaspar takes the round object from Peterkin. He tells them it is a skull. For the first time in the poem, Kaspar refers to the Battle of Blenheim here. He says that the person whose skull Peterkin has found near the rivulet might have died in the “great” battle. Kaspar is unaware of the details of the battle but he believes that it was a famous victory in English history.

From the next section, Kaspar starts to tell his grandchildren about the effects of the war. In that war, many men died and the dead bodies were buried underground. Kaspar finds the skulls of those people when he goes to plow his garden. Such was the degree of bloodshed at that “great victory”. But the commoners like Kaspar take it as a great achievement of their nation. The poet rejects this kind of hollow nationalism.

“Now tell us what ’twas all about,”

“That ’twas a famous victory.

In this 5th stanza of the poem, Peterkin and Wilhelmine ask their grandfather about the war. They are eager to know the reason behind the war from Kaspar. In the next section of the poem, Kaspar tells them that in the Battle of Blenheim, the English forces proudly defeated the French army. But he doesn’t know the reason behind the war. What he knows is that “twas a famous victory.” The last line of this stanza depicts the futility of war.

“My father lived at Blenheim then,

At every famous victory.

In the seventh stanza of the poem, Kaspar explains to the children that at the time of war his father lived at Blenheim. His house was by the side of a stream and in the war, it was burnt. For this reason, he was forced to leave the house along with his wife and child. This stanza again depicts the horrors of war; how the war makes people homeless and causes a lot of miseries to people.

In the next stanza again, Kaspar presents the horrid picture of the war. The soldiers burnt the villages near Blenheim and killed innocent men with their swords. They didn’t even leave pregnant women and newborn babies. Here the poetic persona in the guise of Kaspar ironically remarks, “But things like that, you know, must be/ After a famous victory.”

“They say it was a shocking sight

“But ’twas a famous victory.”

In the following stanza, the poet refers to the ruling class and shows their diabolical attitude towards war. After the heinous bloodshed, they started to say that the sight of the battlefield was shocking to them. But the fact is they were the catalysts of the whole process. The poet uses the imagery of rotting dead bodies here to project the aftermath of the so-called “famous victory”.

Then Kaspar praises the two iconic leaders of the war. One is Duke of Marlborough and the other one is Prince Eugene. After hearing this Wilhelmine says that the war “was a very wicked thing!”. But what a child can understand, elders can’t. So Kaspar goes on to glorify the war instead of accepting the reality.

To veil the harsh reality, the rulers always create an illusion of glorification during a war. They manipulate the subjects by saying, war is something beneficial for the nation. It is the need of the hour and it will strengthen the sovereignty of the nation. All such verbiages are nothing but a way to keep the subjects aloof from reality. Kaspar is also under this illusion. For him, the aftermath of the war means nothing, only the victory counts. That’s why till the end of the poem Kaspar sticks to his idea and says, “But ’twas a famous victory.”