Here is an analysis of Rudyard Kipling’s poem If. Many people consider this poem to be one of the most inspirational, and the poem has garnered much attention in popular culture. In fact, any lover of tennis can probably tell you that several of the poem’s lines are hanging in the player’s entrance at Centre Court Wimbledon in England. The lines that are displayed read, “If you can meet with triumph and disaster and treat those two impostors just the same.” While Kipling wrote poetry, novels, and articles, he is most notably known for his collection of short stories called The Jungle Book, which he wrote in 1894. A British writer, Kipling won the Nobel Prize for Literature in 1907. You can read the full poem here. 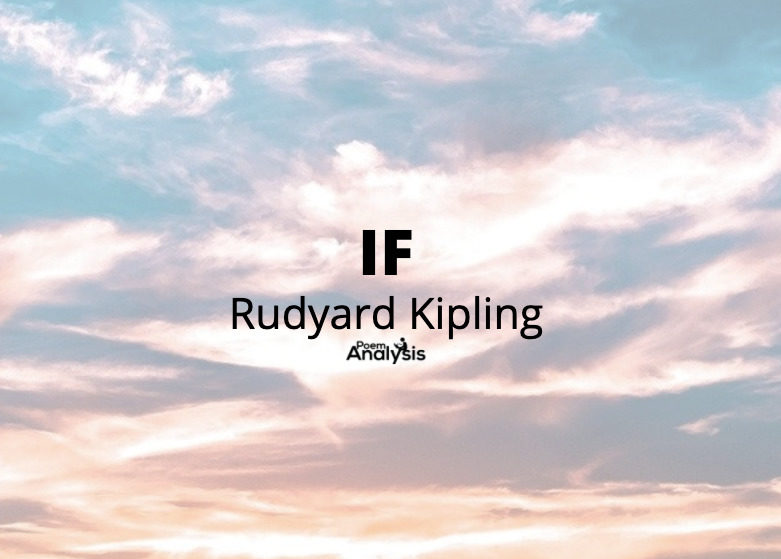 In short, If is an inspirational poem that provides advice on how one should live one’s life. The poem takes the reader through various ways in which the reader can rise above adversity that will almost certainly be thrown one’s way at some point in one’s lives.

Throughout the poem, the speaker gives the reader multiple scenarios, both positive and negative, along with a glimpse into how one should conduct oneself. The poem has an almost mathematical proof about it with its if-then scenario. Kipling leaves the “then” until the final two lines, revealing to the reader that if he or she is able to do all that was just mentioned, he or she will not only have the world at his or her fingertips, but he or she will also be a “Man.”

Breakdown Analysis of If

Rudyard Kipling separates his poem into four stanzas of equal length; each stanza contains eight lines. Each stanza has a set rhyme scheme of ababcdcd, with the exception of the first stanza, which has the following rhyme scheme: aaaabcbc. In terms of meter, the poem is written in iambic pentameter, with five feet consisting of a stressed and then an unstressed syllable. The speaker of the poem, presumably Kipling, keeps a positive and upbeat tone throughout the work, informing the reader what he or she needs to do in order to be a successful person in life. Kipling makes this a very personal poem by his use of the pronoun “you.” In fact, one could even interpret that the poem is Kipling talking to himself or giving himself a pep-talk.

Just glancing at the poem, the reader is immediately hit with the word “If”. Not only is it the title of the poem, but through his use of repetition, Kipling emphasizes the word throughout the entirety of his work. This makes the poem move, and the reader is working his or her way through the poem in order to get to the effects of what will happen if he or she is able to accomplish all that is contained in the poem. Kipling does not disappoint: the reader discovers what will happen in the final two lines of the work.

The first stanza wastes no time in setting up the if-then scenario. Kipling writes, “If you can keep your head when all about you/Are losing theirs and blaming it on you…” In this first “if” scenario, Kipling reminds the reader of the importance of maintaining a level head even when those around the reader do not have one and are blaming the situation on the reader. It should be noted here that the reader soon realizes the poem is really one long sentence. The poem ends on a particularly high note, which Kipling emphasizes with his use of an exclamation point. The third and fourth lines present the next “if” situation. Kipling writes, “If you can trust yourself when all men doubt you,/But make allowance for their doubting too…” Here, the speaker emphasizes two traits that all people must possess: self-trust and the ability to understand the thoughts and feelings of others, even if that means understanding that people will not always like or agree with you. The final four lines of the first stanza flow together nicely, almost sounding as though they are one complete thought. Kipling writes:

If you can wait and not be tired by waiting,
Or being lied about, don’t deal in lies,
Or being hated, don’t give way to hating,
And yet don’t look too good, nor talk too wise…

In these lines, the speaker is telling the reader to have patience. In addition, he informs the reader that even if he or she is lied about, he or she should not stoop to the level of a liar. If he or she is hated, he or she must not become hateful, and finally, the reader should not appear to be better than he or she actually is, nor should he or she talk in a manner that does not reflect who they are morally or spiritually.

If you can dream—and not make dreams your master;

If you can think—and not make thoughts your aim,

Here, Kipling urges his reader to dream and think, but to not get so caught up in dreams and thoughts that the reader loses his grasp on reality. Kipling uses personification in his next two lines:

If you can meet with Triumph and Disaster

And treat those two impostors just the same;

Kipling’s diction here is also worth mentioning. The word impostor suggests a pretense or disguise. Perhaps he uses this word to showcase the fleeting nature of both: success never stays, nor does disaster. Additionally, he could possibly be suggesting that with these two words often comes a disruption or change. In any case, the reader should not dwell too much on either triumph or disaster because they will soon disappear. Kipling continues right on to his next “if” clause:

If you can bear to hear the truth you’ve spoken

Twisted by knaves to make a trap for fools,

The speaker informs the reader that he or she must be able to endure hearing his or her words being twisted by dishonest and harmful people in order to serve their own agendas. He continues this thought in the last two lines of the stanza, writing,

Or watch the things you gave your life to, broken,

And stoop and build ‘em up with worn-out tools,

The speaker demonstrates in these lines the importance of being able to pick oneself up and start again if they fail—even if the thing they’ve failed at has taken all of their life to attempt. The reader must always be prepared to start again.

The third stanza starts with the “if” clause continuing on into the first four lines. Kipling writes:

If you can make one heap of all your winnings
And risk it on one turn of pitch-and-toss,
And lose, and start again at your beginnings
And never breathe a word about your loss…

The theme in these lines is very similar to the one in the last two lines of the previous stanza: if you lose everything, you must be willing to begin again. Not only that, but you must also be willing to forget about the loss and not dwell on it.

The next four lines of the third stanza are also tied together. The speaker states,

If you can force your heart and nerve and sinew
To serve your turn long after they are gone,
And so hold on where there is nothing in you
Except the Will which says to them: ‘Hold on!’

These lines are particularly powerful. The speaker is imploring the reader to endure, even if that feels both physically (sinew) and emotionally (heart and nerve) impossible. It is also worth noting the capitalization of “Will.” Perhaps Kipling wanted to emphasize the resilience of the human spirit here by making it a power that is separate from the person who possesses it.

In the fourth stanza, the consequence of doing all of these “ifs” is finally revealed, but not before Kipling presents us with three more scenarios. The first one deals with how to treat others, regardless of their station in life. He writes,

If you can talk with crowds and keep your virtue,

Or walk with Kings—nor lose the common touch,

It should not matter with whom the reader is walking; he or she needs to treat the lowest of the low and the highest in society exactly the same: with kindness. Kipling then dives right into the next “if”:

If neither foes nor loving friends can hurt you,

If all men count with you, but none too much,

Kipling is reminding his reader that is important to be able to bounce back from disappointment or pain. One must not dwell on his enemies or the hurt a loved one could potentially cause. Finally, the poet gives the reader his final piece of advice:

If you can fill the unforgiving minute

With sixty seconds’ worth of distance run,

He is telling his reader to never give up or waste even a single second of time. If you are given a minute, make sure you use all sixty seconds of it. Finally, in the last two lines, the outcome of abiding by all of these tidbits is revealed:

Yours is the Earth and everything that’s in it,

And—which is more—you’ll be a Man, my son!

If one is able to keep all of these things in check, one will have the world at one’s fingertips.

Historical Background of If

If was first published in 1910. It is somewhat ironic that Kipling wrote a poem about what it takes to be a virtuous man: he was an imperialist who was all for the colonization of the British Empire. Kipling himself spent a lot of time in British India. Kipling wrote the poem after he was inspired by the actions of Leander Starr Jameson.

Jamie joined the Poem Analysis team back in November, 2010. He has a passion for poetry and enjoys analysing and providing interpretations for poetry from the past and present.