Ruth Muskrat Bronson was born in White Water, on the Delaware Nation Reservation in Indian Territory in October of 1897. Her father, James Ezekiel Muskrat was Cherokee. His ancestors had been forced to walk the Trail of Tears in the 19th century.

Bronson enrolled in the Oklahoma Institute of Technology when she was just fourteen, went on to attend Henry Kendall 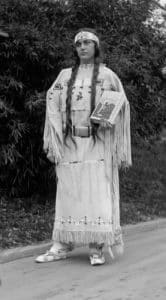 College in Tulsa and then Northeastern State Teacher’s College. Bronson finished this stage of her education at the University of Oklahoma and the University of Kansas. She earned a scholarship to the latter after working on the Mescalero Apache Reservation in New Mexico alongside the YMCA.

She would later travel to China with the YMCA as part of a youth conference delegation. It was this trip that would first bring her to the attention of the international press and inspire her to pursue a career focused on social justice. It was only one year later that she delivered an appeal to the US government asking for better educational facilities for Native Americans. In 1923, she enrolled at Mount Holyoke College and graduated two years later with a BA in English.

Bronson went on to work at the Haskell Institute as a teacher. It was around this time that she won the Henry Morgenthau prize. In 1928 she married and adopted a native child to raise as her own. The development of the Bureau for Indian Affairs in 1931 set Bronson on the path towards the work for which she best-known today. She acquired a job there and was in charge of disturbing government loans and scholarships for students. She remained in that posting until 1943.

In the later years of the 40s, she published a number of books and articles. These included The Church in Indian Life, and Shall We Repeat Indian History in Alaska? She also began working for the National Congress of American Indians. She would thrive in this environment and quickly moved through the ranks of the organization. In 1957 she moved to Arizona and became a health education specialist for the San Carlos Apache Indian Reservation. Bronson received a number of different awards during this time period and became the national program chairman of the Community Development Foundation’s American Indian section.

Bronson suffered a stroke in 1972 but soon returned to work. She spent the rest of her life doing all she could to better the lives of Native Americans. Ruth Muskrat Bronson died in June of 1982 in Tucson, Arizona. You can read Ruth Muskrat Bronson’s poems here.