Sappho was born into an aristocratic family on the island of Lesbos, Greece sometime around 615 B.C. Although it is not entirely clear from records, it appears that she may have had a number of brothers, and have gone on to marry a man by the name of Cercylas. The two likely had a daughter together, named Cleis. 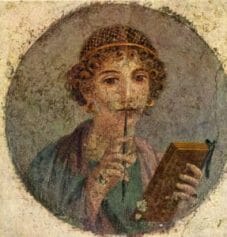 Most of her life was spent working in Mytilene, a city on Lesbos, running a school for unmarried women. The school was devoted to the cult of Aphrodite and Eros. While working there she attained for herself a prominent position in society due to her dedication to teaching. From records, some historians have suggested that Sappho carried a group of like-minded friends with her. She could have had a Socrates-like following.

Additionally, at some point in her life, it is thought that the poet was exiled from the island of Lesbos and sent to Sicily due to political troubles plaguing her at home.

It is unclear how Sappho died but some historians believe it was simply due to old age, around 550 B.C. There is a legend from Ovid, the Roman poet responsible for the Metamorphoses, in which, heartbroken by a failed love affair, Sappho throws herself off a cliff.

Many years after her death her work became labeled as “over promiscuous and lesbian.” This label has lasted until today. The modern word, “lesbian” is even derived from her home on the island of Lesbos. This characterization is not rooted in any discernible fact expect for that her love poems are addressed primarily to women.

Sappho is only one of a very few women poets who are known from antiquity. Her poetry is, and was, meant to be sung by one person who would then be accompanied by another playing the lyre. Today, it is noted for its simplicity and immediacy. The work finds its relevance in contemporary life as the themes on which she wrote are deeply relatable.

Due to the fact that there is a limited record of Sappho’s life, there is no sure date for her death, although she is considered to have lived for approximately fifty years.