Sergei Yesenin was born in Konstantinovo in Ryazan Governorate of the Russian Empire in October of 1895. His parents Alexander Nikitich Yesenin and Tatyana Fyodorovna were peasants who spent most of their time in search of work. When Yesenin was only two years old he was sent to live with his maternal grandparents who were better off than his own parents. They served has his parental figures for most of his life. The majority of his early poems were inspired by Russian folklore and the religion of his grandmother. 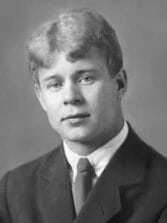 During the years of his education, it is thought that Yesenin wrote somewhere around thirty poems. His first book was a compilation of these works and was titled, Bolnye Dumy or Sick Thoughts. He attempted to have it published in 1912.

That same year Yesenin moved to Moscow where he worked as a proofreader’s assistant at a printing company. He then enrolled at Chanyavsky University where he intended to study history and philology. He was forced to leave after eighteen months as he could no longer afford the tuition. In 1913 he married Anna Izryandnova. It was doing the following year that his first poem, ‘Beryoza,’ or ‘The Birch Tree’ appeared in a magazine. By the end of the year, he had decided to devote himself to writing.

In 1915 he moved to Petrograd where he became friends with some better-known poets such as Nikolai Kluev. These influential friends helped his career along and introduced him to the publisher Averyanov. It was through Averyanov that Yesenin’s first collection, Radunitsa, was published. Yesenin was drafted the next year and sent to the Warrant Officers’ School. He deserted and went on to marry for the second time. The following year saw whim meet and befriend Anatoly Marienhof, with whom he founded the imagism movement. They soon crafted the Imaginists’ Manifest.

Throughout the twenties, his popularity grew as well as his public profile. He was arrested twice in Moscow and then four more times in early 1924. Throughout these struggles, his health was failing, but he continued to write and publish. His works during this period include ‘One joy I have left,’ ‘A Letter to Mother,’ and ‘The Black Man.’ His final piece, ‘Goodbye, my friend, goodbye.’ It was found along with his body in December of 1925. There are multiple theories of his death, the first that he committed suicide by hanging and another that he was murdered by OGPU agents.

Pathetic fallacy is used to describe the attribution of human emotions and actions onto non-human things found in nature.
Full Description | Glossary