Does it Matter? by Siegfried Sassoon

‘Does it Matter?’ is one of Siegfried Sassoon’s best-known poems. It was written in 1917 after Sassoon had grown tired of war, and lost the patriotism that had defined his verse in earlier years. The poem describes the variety of injuries that men receive in war, those of the body and those of the mind.

The poem was published a year after it was penned, in 1918, in Sassoon’s collection Counter-Attack and Other Poems. ‘Does it Matter?’ is one of the most important poems in the volume and sets the tone for the poems that followed it. 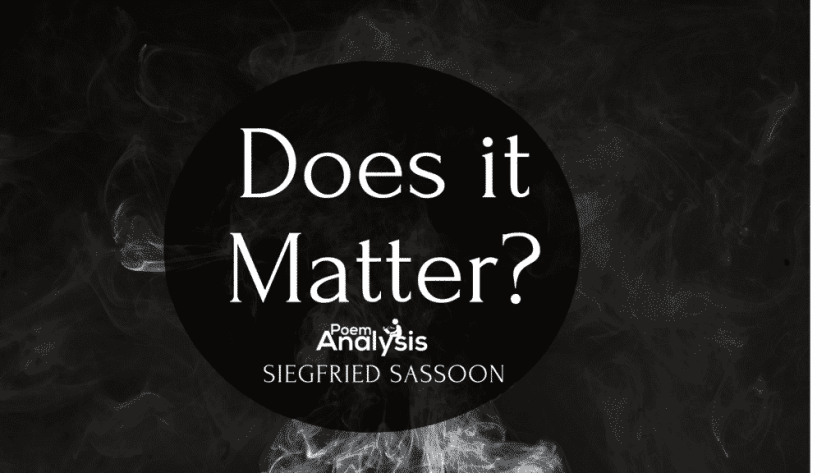 Explore Does it Matter?

Summary of Does it Matter?

‘Does it Matter?’ by Siegfried Sassoon is a moving anti-war poem that describes injuries, physical and mental, that men receive in war.

The poem takes the reader through three different scenarios. In the first, a man loses his legs, in the second: his eyes, and in the third: his mind. In each of the stanzas, the speaker suggests, sarcastically, that these injuries don’t matter because there are kind people in the world and drink to soothe the pain. By approaching this topic in this way the poet is able to emphasize the truth of these sorts of injuries and allow the reader to understand that they’re never going to heal like the public might like them to.

Themes in Does it Matter?

The clearest theme of this poem is anti-war. Sassoon was very adamant in his protestations against the First World War after spending time as a soldier on the Western Front. He knew well the horrors that men faced on the battlefield and learned first hand of the lasting nature of the injuries they received. Readers should also consider perception and mental health as themes in this piece. The poet expresses an interest in the ways that non-soldiers react and perceive their friends and family members when they come back from war. They are happy to forget that these men have gone through something life-changing. It is easy for them to see the put-on happy face as one of genuine contentment.

Structure and Form of Does it Matter?

‘Does it Matter?’ by Siegfried Sassoon is a three-stanza poem that is separated into sets of five lines, known as quintains. These quintains follow a steady rhyme scheme of ABBCA, changing end sounds from stanza to stanza. The meter is less consistent. Sassoon chose to primarily make use of anapaestic trimeter.

This means that each line contains three sets of three beats, known as anapaests. These anapaests are made up of two unstressed beats followed by one stressed beat. But, there are moments in which this pattern is broken and Sassoon uses iambs. The extra syllable that Sassoon uses to create this effect can be seen in the fourth line of all three stanzas.

Literary Devices in Does it Matter?

Sassoon makes use of several literary devices in ‘Does it Matter?’ These include but are not limited to imagery, caesura, and alliteration. The latter, alliteration, is a formal device that is seen through the repetition of multiple words that begin with the same consonant sound. For example, “losing” and “legs” in line one of the first stanza and “Do” and “Dream” in line one of the third stanza.

There are a few examples of caesurae scattered throughout the poem. It is clearest in the first line of each stanza where the poet uses a dash or a question mark followed by a dash in order to divide the line up. A question is asked and then answered.

Imagery is one of the most important techniques in ‘Does it Matter?’ It is important that the reader feel as though they are able to clearly imagine the pain that the soldiers go through in order to get the full effect of the poem. For example, these two lines from the second stanza: “As you sit on the terrace remembering / And turning your face to the light”. Without saying much, Sassoon is able to convey the emotion of the scene.

Analysis of Does it Matter?

Does it matter? -losing your legs?

To gobble their muffins and eggs.

In the first stanza of ‘Does it Matter?’ the speaker asks a sarcastic question about whether or not losing one’s legs “matters”. The answer to this question should be emphatically, yes, of course, it matters. But, the speaker goes a different route in order to show the absurdity of war and the public’s lack of understanding about the suffering that the soldiers go through. There are wounds that can’t be healed, mental and physical, by “kind” people.

Sassoon understands the mindset of a soldier well. He creates an image of this man, who is now unable to go hunting with his friends and family, sitting and cheerily greeting the returning hunting party. These other people don’t see the soldier’s pain and he works hard to hide it. The others “gobble their muffins and eggs,” totally unaware of the suffering that the soldier is going through.

Does it matter? -losing you sight?

And turning your face to the light.

The second stanza of ‘Does it Matter?’ starts the same way as the first stanza. The speaker asks another question that he answers immediately. He uses blindness as an example this time, rather than losing one’s legs. There’s “splendid work for the blind,” he says as if this fact does away with this sorrow of losing one’s sight and the mental scars of being in the war. By suggesting that kind people are enough to make up for this injury the poet is drawing attention to how very untrue the statement is.

One of the best, and most memorable, images in ‘Does it Matter?’ comes at the end of this stanza with the speaker describes this now blind man sitting outside and turning his face “to the light”. This is a sorrowful scene that shows the longing in the man’s mind and heart for a time when things were different than they are now.

Do they matter-those dreams in the pit?

You can drink and forget and be glad,

And no one will worry a bit.

The third stanza starts slightly differently than the previous two. But, there is still a question in the first lines. Sassoon moves on from physical injuries to a mental one. The “dreams of the pit” are the focus of this stanza. The “pit” is likely a reference to both the Hell that is war and to the actual trenches that soldiers were forced in the bunker and fight from. His sarcastic question in the first line is followed up with statements that suggest that people who don’t understand the impact of war won’t comprehend the true damage that soldiers endure.

The speaker suggests, sarcastically, that you can “drink and forget and be glad” and then no one will recognize that “you’re mad”. Others will be happy to accept a soldier’s drinking because he fought for his country and they won’t have to worry about him at all.

Sassoon is one of the best-loved war poets of all time. Readers should also look into Sassoon’s other poems. For example, ‘Dreamers,’ ‘To Any Dead Officer’, and ‘The Death Bed’ all of which focus on the horrors of war. There are many other poets who touch on the similar subject matter. Some of the best poems include ‘August, 1914’ by Vera Mary Brittain, ‘The Bombardment’ by Amy Lowell, and ‘In Flanders Field’ by John McCrae. Also, make sure to check out our list of 10 of the Best War Poems.

Home » Siegfried Sassoon » Does it Matter?