Sir Walter Raleigh was born in Hayes Barton, East Budleigh, Devon, England in either 1552 or 1554. There is very little information known about the early days of Raleigh’s life but it is thought that he grew up in a farmhouse near the village of East Budleigh. He was the youngest of five sons born to Walter Raleigh and Catherine Champernowne. His parents were both on their second marriages, meaning he had a number of half-siblings. 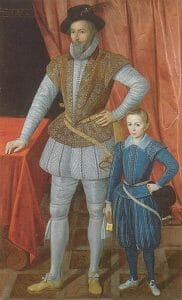 Raleigh grew up in a strongly Protestant family which was often in danger during the reign of the Roman Catholic Queen Mary I. Due to this history, the young man grew to hate Roman Catholicism, a fact with pleased the future Queen Elizabeth I.

In 1569, while Raleigh was still a teen, he left England for France where he served alongside the Huguenots in the French religious wars. Upon his return, he was enrolled in Oxford where he studied for only two years. He left without a degree to study law in London at Inns of Court. It was around this same time period that his first poetic works appeared. They were included as a preface to George Gascoigne’s satire The Steele Glas.

There is a bit of mystery surrounding the next years of Raleigh’s life but it is known that he accompanied his half-brother Gilbert in a failed attempt to find the Northwest Passage. The following years saw him take part in the suppression of the Desmond Rebellions. He was part of the Siege of Smerwick in which he led a party that beheaded hundred of Spaniards and Italian soldiers. He was given somewhere around 40,000 acres after the rebellion ended. This gift immediately made him one of the most prominent landowners in Munster.

From 1588 to 1589 Raleigh was mayor of Youghal, a town that was his occasional home in Ireland. While living in Ireland he came to befriend poet Edmund Spenser whose unfinished epic poem, The Faerie Queen, is hailed as a masterpiece of the English language.

In 1584, Queen Elizabeth granted Raleigh a royal charter authorizing him to explore and colonize lands of the New World. He was given seven years to establish a settlement and send riches back to England. Raleigh never made it to North America but he did lead expeditions n South America in search of El Dorado. He also sent the colonists who would found the Roanoke Colony, later known as the “Lost Colony.”

Expeditions to the New World

Throughout the 1580s Raleigh became an integral part of Queen Elizabeth’s court. He was knighted and appointed warden of the stannaries, or tin mines, in Cornwall and Devon. He was also made Lord Lieutenant of Cornwall. For one year, between 1585-86 he sat as a member of parliament for Devonshire. It was around this period of time that the majority of his poems were written. He used his influence to ensure that Spenser’s The Faerie Queen was received well by the Queen.

In 1592, Raleigh was given Durham House in the Strand and the estate of Sherborne in Dorset. He soon fell out of favour though when the Queen found out that he had secretly married Elizabeth Throckmorton, a member of the royal court. This led to his imprisonment in the Tower of London. He was released in a matter of months.

Although free, he was stripped of his privileges and excited from the court. In 1595 he sailed to Orinoco River in Guiana in search of gold and later regained the Queen’s favour after completing a raid on the Spanish at Cadiz. In 1601, he put down a rebellion led by the earl of Essex.

After Elizabeth’s successor, James I, came to the throne, Raleigh was charged with treason and sentenced to death. He was imprisoned in the Tower for the next thirteen years. While there he wrote The History of the World. A work that is now considered to be a literary masterpiece. Raleigh eventually talked about his way out of prison and led another expedition to South America to find gold.

Rather than actually searching for gold on land, he planned to raid Spanish ships. James directly warned against any action which might increase tensions between the two countries but Raleigh ignored him. The raids went disastrously, leading to the death of Raleigh’s eldest son. Upon his return to England, he was once more imprisoned and then executed in October of 1618.

An asclepiad is a line of poetry that is built around a choriamb and that dates back to Ancient Greece. In Latin, it is written as “Asclepiadeus.”
Full Description | Glossary