‘Seascape’ by Stephen Spender depicts a seascape that is both peaceful and dangerous. The poem reminds readers of how fickle and dangerous the ocean can be. 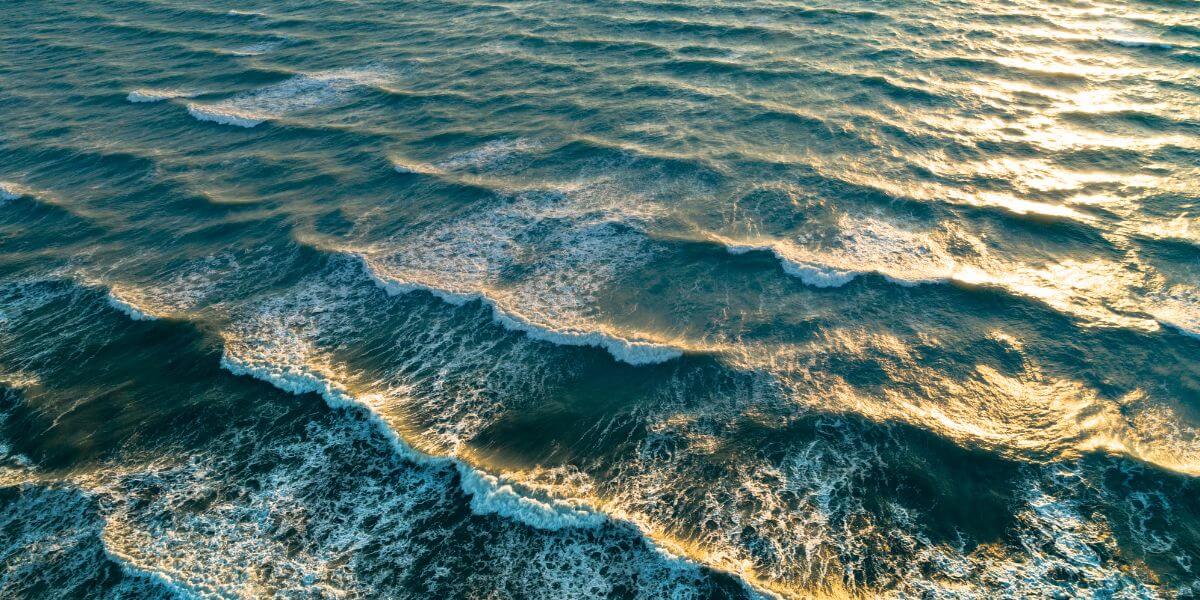 This unique, four-stanza poem follows a few different rhyme schemes and uses two different stanza lengths. ‘Seascape’ is meant to convey the beauty and deadly nature of the ocean while humbling and inspiring readers to admire the sea. Spender also emphasizes how without the death the sea causes and which it plays host to, there would be no life.

‘Seascape’ by Stephen Spender is an interesting poem about the sea and its power over humanity.

In the first part of the poem, the speaker begins by describing the sea as a peaceful, quiet, unfingered harp. It’s sitting, waiting for something to happen. When the sea is stimulated, by even the smallest occurrence, a great deal of death can result. The poet uses the final stanza to bring in images of travelers and explorers who believed they could control or conquer the sea but have been lost to it.

The main theme of this poem is nature. Specifically, the poet focuses on the sea’s power and how despite what it might seem at times (as an “unfingered harp”) a small change (as small as a woman’s sigh) can result in immense destruction. It takes what it wants and will not be denied its ritual sacrifice. This is something that is meant to remind readers of how important death is in order to stimulate new life.

‘Seascape’ by Stephen Spender is a four-stanza poem that is divided into stanzas of either seven or six lines. The first and fourth stanzas have seven Ines, and the second and fourth have six. The first stanza follows a rhyme scheme of ABCACCB. The second uses some of the same end sounds but is more loosely arranged. Lines one and five rhyme as do lines two and three. The third stanza rhymes ABCABD, and the fourth rhymes: ABCDBCD. It’s unusual for Spender to utilize such a complicated rhyme scheme, but it is highly effective in this context as he emphasizes the changeable nature of the sea.

There are some days the happy ocean lies

Afternoon guilds all the silent wires

Into a burning music for the eyes

On mirrors flashing between fine-strung fires

The shore, heaped up with roses, horses, spires

In the first stanza of the poem, the speaker begins by describing the ocean as an “unfingered harp.” This is a very evocative simile, one that is meant to evoke a force in waiting. With only a small amount of pressure, the sea can turn into something incredibly beautiful or something raging and dangerous.

It’s below land, waiting in a way that may prove foreboding and intimidating to humankind. The land, the last two lines of the stanza add, is filled with human-made things, like spires, as well as animals and other non-oceanic landscapes. All of this is “on water tall above ribbed sand.” It’s as though all of the world is elevated by and at the mercy of the ocean.

When the “unfingered harp” is stroked (or “fingered”), things shift significantly. The ocean’s support and peaceful quiet changes.

The motionlessness of the hot sky tires

Or bell, or shout, from distant, hedged-in, shires;

These, deep as anchors, the hushing wave buries.

Anything, even something as simple as a “woman’s” sigh from inland, change disturbs the ocean. It’s fickle and liable to lash out, change, and take what it wants without a moment’s notice.

The ocean draws in all sounds and life around it, hushing everything from a woman’s sign to a bell or a gull’s sharp cry. They are thrust beneath the waves, hushed and buried by the ocean’s far superior force.

The sea is all-powerful over humanity, the speaker is indicating. It hides its brutality for a time, appearing peaceful and beautiful, before transforming and reminding all those who would seek to tame it that such a task is impossible.

Then from the shore, two zig-zag butterflies

Such wings sunk in such ritual sacrifice.

The final line of stanza three gives away much of what Spender is trying to accomplish with ‘Seascape.’ He refers to a “sacrifice” that “Fishermen understand.” It’s seen when the butterflies cross the “bright strand” and spiral over the waves before drowning. The sea is a formidable force, one that requires such sacrifice in order to bring forth life. Without death, there is no life, the poem suggests.

The beautiful images in the first few lines come to a halt with the two-word phrase “They drown,” which starts line five of this stanza. All the beauty in the world could be brought to a halt by the ocean; that’s how great its powers are.

Glitter with coins through the tide scarcely scanned,

While, far above, that harp assumes their sighs.

The speaker looks beyond the strictly natural world to “legends of undersea, drowned cities” and the many voyagers who have lost their lives trying to travel from one land to the next. These are “heroes” whose lives burned bright and were extinguished by the ocean. The “seas engulfed” them in a way that mimics the deaths of the butterflies in the previous stanza. They too, are at the mercy of the water.

The final few lines bring the images of death, humanity’s hubris, and the harp from the first stanza to a close. The men/explorers (who are seeking out wealth and fame on the seas) contribute to the harp’s sound (or the sea’s sound) in the last line. The harp, now personified and symbolizing the sea, “assumes their sighs,” or takes on their sighs and turns their lives and their sacrifices into part of the sea’s overall music.

What is the purpose of ‘Seascape?’

The purpose is to humble humanity. The poet depicts the sea with beautiful imagery before reminding all those reading that although the sea is gorgeous, it is also entirely in control of the world’s fate. It can take away lives in an instant.

What is the poem ‘Seascape’ about?

The poem ‘Seascape’ is about the power of the ocean and how it can appear peaceful and navigable before striking out and reminding humanity of its immense power.

What is Stephen Spender famous for?

Stephen Spender is an English poet who was born in London in 1909 and passed away in 1995. He also worked as a critic and is remembered today for his socially relevant writing that often struck a political cord.

Who is the speaker in ‘Seascape?’

The speaker is someone who has spent a great deal of time thinking about and observing the sea. They’re someone who cares for the natural world more generally as well. Their gender, age, name, and exact intentions are not made clear and are not important for the reader’s understanding of the text.

A chip off the old block

“A chip off the old block” is used to refer to someone who is similar to a person who was influential in their life.
Full Description | Glossary