‘Two Armies’ by Stephen Spender describes two armies on a devastating battlefield where every individual is suffering. Their common humanity is highlighted. 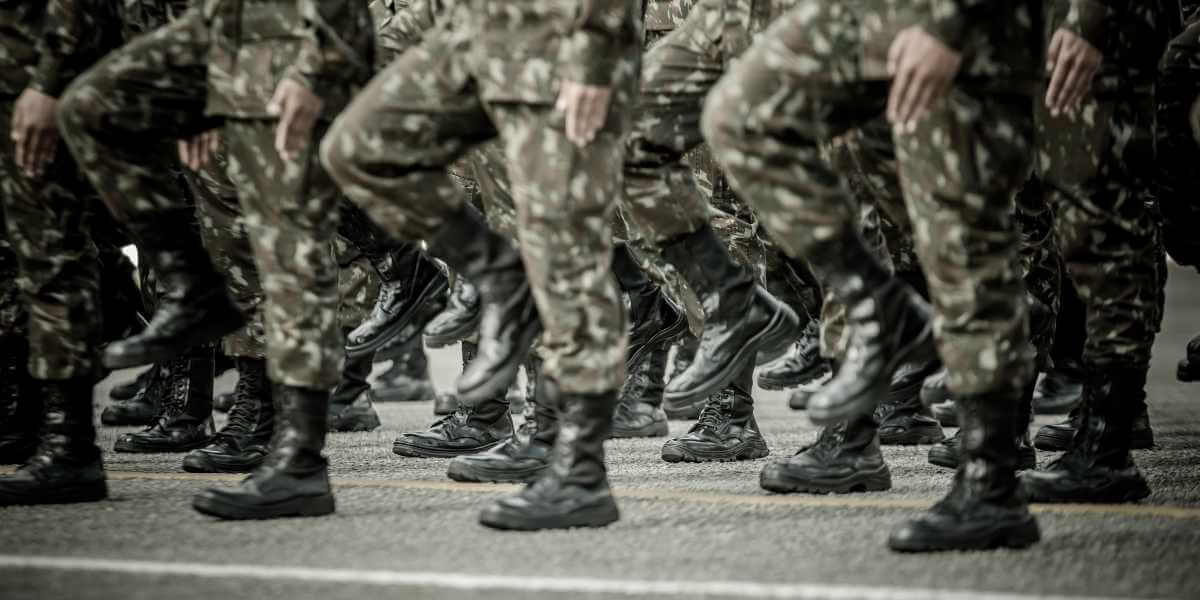 This is an interesting Stephen Spender poem in which he uses his six stanzas to remind readers that no matter one’s opposition to another person’s beliefs, country, etc., everyone is human, and everyone suffers in the same ways. This is demonstrated through the two devastated armies who are forced to fight one another despite having lost their hate and motivation.

‘Two Armies’ by Stephen Spender is a unique and thoughtful poem that asks readers to remember humankind’s commonalities.

The poem starts with the description of two armies, an image of division that’s quickly overwhelmed by the two sides’ common suffering. The nationality of the army and what they’re fighting for don’t matter when it comes to the terrible conditions they’re living and fighting in. The speaker focuses on a couple of individual situations and continues to draw readers’ attention to what’s been lost and what will be lost in the future by these trapped men.

‘Two Armies’ by Stephen Spender is a six-stanza poem that is divided into four six-line stanzas and two seven-line stanzas. The poem is written in free verse. This means that the poet did not make use of a specific rhyme scheme or metrical pattern. But, the poet does use repetition throughout this piece, seen through the use of the same end sounds and entire words. This helps create a feeling of rhythm where there might not be one otherwise.

In this poem, Spender uses a few different literary devices. They include but are not limited to:

Dig their machinery, to destroy each other.

Men freeze and hunger. No one is given leave

On either side, except the dead, and wounded.

These have their leave; while new battalions wait

On time at last to bring them violent peace.

In the first stanza of ‘Two Armies,’ the speaker begins by setting the scene. It’s a dark winter, and two armies are laying in wait, hoping to battle one another. The sides initially seem quite divided, but before long, the speaker makes it clear that their suffering unites them. They are together in this horrible climate, and all are starving and freezing. No one is allowed to leave (besides those who have lost their lives or are seriously wounded.”

Plus, when people do leave, they are replaced by others that join in the suffering everyone is sharing.

All have become so nervous and so cold

That each man hates the cause and distant words

The voice was choked, the lifted hand fell,

Shot through the wrist by those of his own side.

Before long, the men on both sides feel the same way about their different causes. They hate the ideologies and governments that brought them there, described as “distant words.” They are more horrible “than bullets.” It’s these words/declarations that have caused their suffering and are causing more suffering than any violence the two sides can commit against one another.

The speaker uses the next lines as examples of the everyday horrors the men experience. The speaker recalls a singing boy’s voice being choked and a novice’s hand being shot through the wrist by someone on their own side. These terrible events are described very clearly and with little emotion. This is the way things are there, and there is nothing but leaving that can change it.

From their numb harvest all would flee, except

For discipline drilled once in an iron school

Which herd the plain in a mass unspoken poem.

The men on both sides would run away if it wasn’t for the “discipline drilled once in an iron school / Which holds them at the point of a revolver.” This suggests threats of further violence. They know that if they were to leave, they’d risk death.

All the men, despite their differences, dream of home, the speaker continues. They imagine riding horses wildly away from the battlefield and to their warm and welcoming homes.

Finally, they cease to hate: for although hate

With the dumb patience of these tormented animals?

After a time outdoors, suffering, and terrible conditions, the soldiers stop hating one another. That is, despite the fact, that violence and hate continue around them, depicted as hate bursting “from the air and whipping the earth like hail.”

The poet’s speaker refers to the soldiers as “tormented animals” in the final line of the stanza. This suggests they have no control over their fate and wait with “dumb patience” for it all to end.

Clean silence drops at night when a little walk

As though these enemies slept in each other’s arms.

At night, the noise of guns blasting ends, and there is silence between the two armies. They are barely separated, the speaker says; there is only a little walk between them. They all spend the night cold in the same way with a “common suffering.” They are living the same lives in these moments in a way that makes it feel as though they are sleeping in “each other’s arms.” This is a great example of juxtaposition. It asks readers to reimagine the two armies, not as enemies but as people, all of whom are miserable.

Only the lucid friend to aerial raiders,

The furious words and minerals which kill life.

In the final stanza of the poem, the only friend the men have is the moon that shines down on them at night. The moon is personified in these lines, referred to as she. The moon looks down on the dark plain, lightning up on sections of it that are covered with “many thousand bones.” It’s a truly horrible place in “no-man’s-land,” and it is only illuminated by the moon.

The final line uses the phrase, “The furious words and mineral which kill life.” This extremely clever line alludes to the minerals used to create weapons and the “words” that cause and exacerbate conflicts.

What is the theme of ‘Two Armies?’

The theme is the unity of humankind. All people, no matter where they’re from or what they believe (represented by the two armies), suffer when they’re put in terrible situations.

What is the purpose of ‘Two Armies?’

The purpose is to remind readers that words, ideas, countries, and more are variables that barely separate people. When they’re thrown together in a terrible situation like that which is described in the poem, all people suffer together.

What is the tone of ‘Two Armies?’

The tone is mournful and compassionate. The speaker clearly feels for the men suffering on either side of the conflict and knows, in detail, everything they’re going through.

Who is the speaker in ‘Two Armies?’

The speaker is unknown. They are someone who has insight into this conflict and knows what it means to suffer on either side of a terrible battlefield. They are also capable of seeing beyond nationality and feeling empathy for all people.