S yliva Plath was born in Boston, Massachusetts in October of 1932. After a series of disappointing experiences in New York, (which would later inspire The Bell Jar) Plath was sent down a dark path. She began to self-harm and was admitted to the hospital for electroconvulsive therapy.

The later parts of 1962, were the most creative of Sylvia Path’s life. She wrote the majority of the poems which would be included in Ariel. Although she was succeeding poetically, she was still deeply unhappy. She tried to kill herself a number of times throughout the early 60s, and in February of 1963, she succeeded.  Today, Plath is considered to be one of the best poets of her generation.

‘Lady Lazarus’ is one of Plath’s most memorable poems. It is one of several that the involves the theme of death. The title makes this very clear as it refers to the Biblical character, Lazarus. His name is synonymous with new life, and his miracle of being raised from the dead by Christ. In the first lines of the poem, the speaker compares herself to a Holocaust victim. She tells the reader that she has been through a lot. Like a cat, she has multiple lives.  She keeps coming back. This process is so common in her life now that there are those who watch her. It is treated as an art.

‘Daddy’ is a controversial and striking poem. Like in ‘Lady Lazarus,’ the poet uses Holocaust imagery. Throughout the poem, the speaker who is generally considered to be Plath herself compares her father figure to many things, including a Nazi officer and a vampire. Plath had a troubling and interesting relationship with her father, Otto, who died when she was eight-years-old. By the end of the poem the speaker claims that she got revenge on her father and her husband, killing them both. She is now able to set them to the side and clear her mind.

‘Ariel’ is best known as the title poem of her collection Ariel. The poem describes an intense and terrifying experience in which the speaker is stuck on a horse, sprinting towards the sun. In addition to the feelings of being out of control and terrified, there is a transformation at the heart of the poem. She goes through an emotional and mental transformation as she is carried towards the sun, and more metaphorically, towards death. This poem was shortly followed by her suicide.

‘Winter Landscape with Rocks ‘ is a poem that uses a nearly lifeless landscape as a metaphor for the speaker’s state of mind. The speaker takes note of how fluidly a river runs through the different parts of a watermill. It goes past all obstacles and enters a dark pond. Darkness is one of the primary images in this work. It is a dreary place, but there is some life there. Juxtaposition is used when a swan enters the scene. Its purity at that moment strikes the speaker. It is out of place within the narrative but somehow makes sense.

Sylvia Plath was born in Boston, Massachusetts in October of 1932. Her mother was Aurelia Schober Plath and was of American-Austrian descent. Plath’s father was Otto Plath. He was an entomologist and professor from Grabow, Germany.

In 1936, the family moved from Jamaica Plain, Massachusetts to Winthrop. It was here, at eight-years-old that Plath published her first poem in the Boston Herald’s children’s section. A number of poems would follow over the next years. It was at 11 years old that she began keeping a journal and winning awards for her paintings. She was known to be a very intelligent young woman. Plath would later speak of these years of her life as being bliss compared to what would come next.

In 1940, Otto Plath died after complications from the amputation of a foot due to untreated diabetes. He was buried in Winthrop and after a visit to her father’s grave, Plath wrote the poem ‘Electra on Azalea Path.’  She would write a number of other poems concerning her troubled relationship with her father including one of her best-known works, ‘Daddy.’ Plath’s mother moved the family to Wellesley, Massachusetts in 1942 where she attended Bradford Senior High School. She graduated in 1950.

After her graduation, Plath published her first work in a national magazine, the Christian Science Monitor. In characteristic fashion, Plath was the recipient of a scholarship to attend Smith College. She was an excellent student and today a memorial plaque is situated on the door of her university home, Lawrence House. During her time at Smith, she edited The Smith Review and was later awarded a temporary position as a guest editor of Mademoiselle magazine in New York City.  This was a much-coveted position but would not live up to expectations.

The days that Plath spent in New York triggered the beginnings of the darkest part of the young poet’s life. She was subject to a number of experiences that muddied her view of the writing and publishing world. During one particular occurrence, Plath was left out of a meeting attended by Welsh writer Dylan Thomas. She adored the poet and sought him out for days after he had departed the city.

A few weeks after this incident she began to self-harm. She slashed her legs with a knife in an effort to see if she would be able to kill herself if she so chose.  The events which transpired in New York would later become the inspiration for her novel, The Bell Jar. The main character also embarks on a similar, disheartening journey to New York City.

She submitted her thesis, The Magic Mirror: A Study of the Double in Two of Dostoyevsky‘s Novels, and graduated in June after spending time in a psychiatric hospital. She went on to obtain a Fulbright scholarship and study at Newnham College at the University of Cambridge in England. She continued to publish her poetry, this time in the student newspaper Varsity.

In 1956, Plath met fellow writer Ted Hughes. They’re married in June of that same year. The following year saw Plath and her new husband move to America. She found work as the receptionist in the psychiatric unit of a hospital and was able to spend her free time sitting in on lectures, such as the given by the poet Robert Lowell. These events were also attended by writers such as Anne Sexton.

In 1959, the couple moved back to England. Plath’s daughter Frieda, was born in 1960, and later that same year she published her first collection of poetry, The Colossus. In 1961, she suffered a miscarriage. This event was addressed in a number of her poems. The Bell Jar was finished in 1961 and the following year she was involved in a car crash. That same year saw Hughes’ involvement with another woman.

This time period, in the later parts of 1962, was the most creative of Sylvia Path’s life. She wrote the majority of the poem which would be included in Ariel. Although she was succeeding poetically, she was still deeply unhappy. She tried to kill herself a number of times throughout the early 60s and in February of 1963, she succeeded. She was thirty years old.

Explore poetry by Sylvia Plath below, analyzed by the team at Poem Analysis. 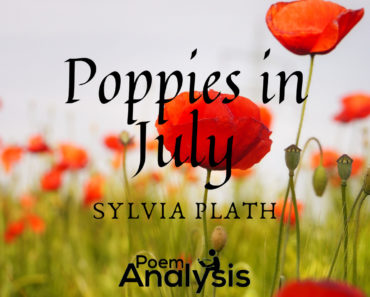