‘Blackberrying’ by Sylvia Plath explores decaying and flourishing life and human mortality. It was published in 1971 in Crossing the Water, after the poet’s death. 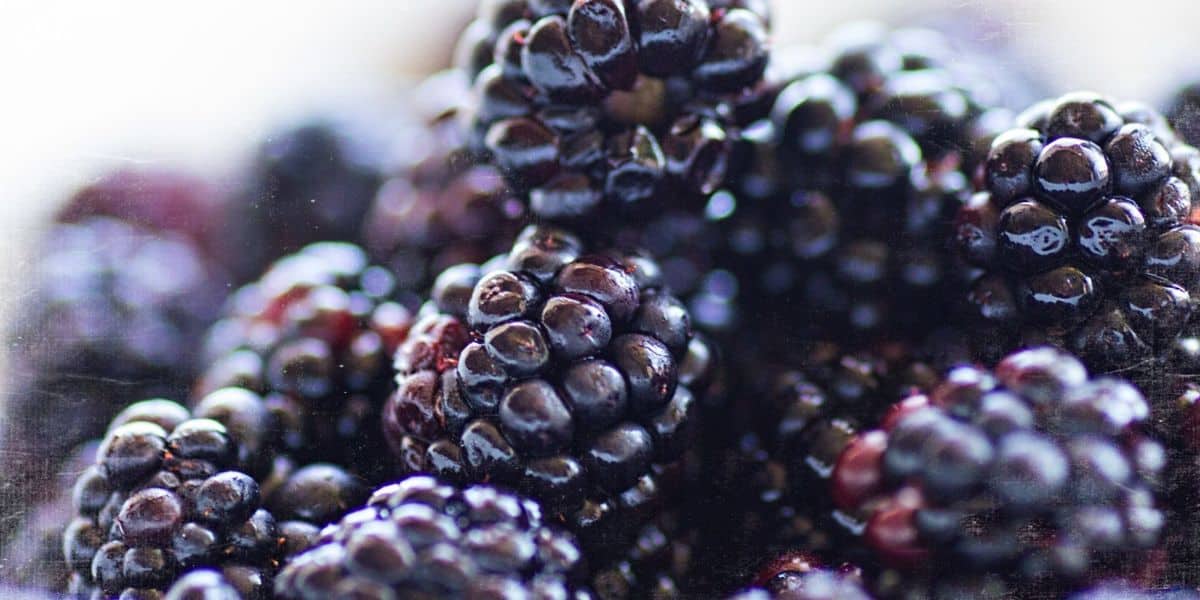 The poem demonstrates Plath’s skill with imagery and figurative language, as well as the complexity of her verse. According to Ted Hughes, to whom she was married until her death, the poet wrote this poem in 1960 after the two returned to England and after the birth of their daughter.

‘Blackberrying’ by Sylvia Plath is a poem about life, death, and the path towards the latter that all people walk.

In the first stanza, the poet describes walking through a blackberry alley, getting the fruit juice on her hands, and feeling connected to the plant. She’s alone, she notes, as the only human being present on a walk to the sea. The ocean is in the distance, but she can’t see it.

She takes note of blackbirds and swarming black flies that feast on the blackberries. The sea is still out of sight, and she isn’t sure if she will ever get there. In the final stanza, she comes through a funnel between the hills and sees the sea, which she also describes as nothing. She compares its movements and sound to the hammering of a silversmith.

Throughout this poem, the poet engages with the theme of the inevitability of death and nature. She emphasizes the nothingness and liveliness of the natural world and focuses on small details, like blackberry juice on her hands. While everything feels very alive, it’s also rotting and infused with darkness.

‘Blackberrying’ by Sylvia Plath is a three-stanza poem divided into sets of nine lines. These lines are written in free verse. The poet did not use a specific rhyme scheme or metrical pattern. The lines use different end sounds and are of different lengths.

The poet uses long, run-on sentences that stretch across several visual poetic lines. She also makes use of enjambment to drive the poem forward and convey the twisting, seemingly endless journey her speaker’s on through the blackberries.

Nobody in the lane, and nothing, nothing but blackberries,

Blackberries on either side, though on the right mainly,

A blackberry alley, going down in hooks, and a sea

Somewhere at the end of it, heaving. Blackberries

Big as the ball of my thumb, and dumb as eyes

Ebon in the hedges, fat

With blue-red juices. These they squander on my fingers.

I had not asked for such a blood sisterhood; they must love me.

They accommodate themselves to my milkbottle, flattening their sides.

In the first lines of this poem, the poet begins by describing picking blackberries by the sea. Her speaker explores the surroundings and emphasizes the fact that she is completely alone. This is seen through the repetition of the word “nothing” in the first line. She juxtaposes this loneliness with the blackberries. They’re numerous, and the poet personifies them to give them human characteristics.

The speaker is being drawn down the hooked blackberry path or alley. It’s headed towards the sea, “Somewhere at the end of it, heaving.” The word emphasizes the sea’s movements and strength while comparing it to human exertion.

The poet personifies the blackberries, describing them as “dumb as eyes” and squandering themselves on her fingers. She mentions the juices and how they mingle with her skin, creating a “blood sisterhood.” She feels connected to the fruit and close to all the life around her. So much so that she asserts that the blackberries “must love” her.

One more hook, and the berries and bushes end.

The second stanza is darker than the first and leans heavily on allusions to death. The black “choughs,” a type of bird, fly overhead in “cacophonous flocks” like “Bits of burnt paper wheeling in a blown sky.” The birds, sky, and sea all move, suggesting the liveliness of the world and the way that one can never latch on to a single moment.

Everything is passing the speaker by, and as the only human being there, she alone observes the “voice” of the birds “protesting, protesting.” The birds’ ominous presence suggests that there is something darker going on.

The blackness of the birds, berries, and now flies and their numerousness surrounds the speaker. She sees a whole bush of flies feasting on the berries (which are depicted as rotting and falling apart) and feeling like they’ve made it to heaven. The plethora of food around them is all they could ever ask for, creating a positive for one living thing among the darker elements of the world she’s included.

As the speaker walks down the alley, the sea continues to allude to her. It’s a destination she knows is there but is still so distant.

The only thing to come now is the sea.

Beating and beating at an intractable metal.

The final stanza suggests that all left for her now is to “come” to the “sea.” Suddenly, the wind comes at her through a funnel-like shape in the hills. It slaps her in the face like invisible, phantom laundry. She’s moving away from the “hills,” which are “too green” and unrealistic. The place she was has a “sweet” taste from the blackberries, and she’s moving closer to the sea, which tastes like salt. She’s being funneled there, and the last hook of the path brings her to “nothing, nothing but a great space.”

As in the first lines, she emphasizes the lack of life there (although she contradicts herself by describing blackberries, birds, and flies). The sea is nothing but a “great space / Of white and pewter lights,” she says, making a “din like a silversmiths.” It beats at the shore, like someone forging “intractable metal.” This last example of a simile and personification ends the poem.

What is the theme of ‘Blackberrying?’

The theme is the inevitability of death and nature. The poet’s speaker experiences lightness and darkness while walking through the blackberries. The fruit, the flies, and birds represent both while she seeks out the ocean, which is personified as a powerful, unending force that labors unceasingly.

Who is the speaker in ‘Blackberrying?’

The speaker is considered to be Sylvia Plath herself. She wrote the poem around 1960, according to Ted Hughes, after the two returned from a trip.

What is the tone of ‘Blackberrying?’

The tone is analytical and accepting. She doesn’t fight what she sees along the blackberry path, nor does she pass judgment on it. She describes the flies, birds, and sea as she experiences them.

Why did Plath write ‘Blackberrying?’

Plus likely wrote this confessional poem after her daughter’s birth and as a way of exploring morality and the path all human begins to walk towards death.

What is Sylvia Plath known for?

Sylvia Plath is known for her confessional poetry that often engaged with themes of a woman’s role in everyday life, motherhood and pregnancy, death, suicide, and the purpose of life.

Readers who enjoyed this poem should also consider reading some other Sylvia Plath poems. For example: