‘Big Poppy’ speak of what happens when a Poppy in its full bloom and a bumblebee meet in Ted Hughes’s usual style of writing. 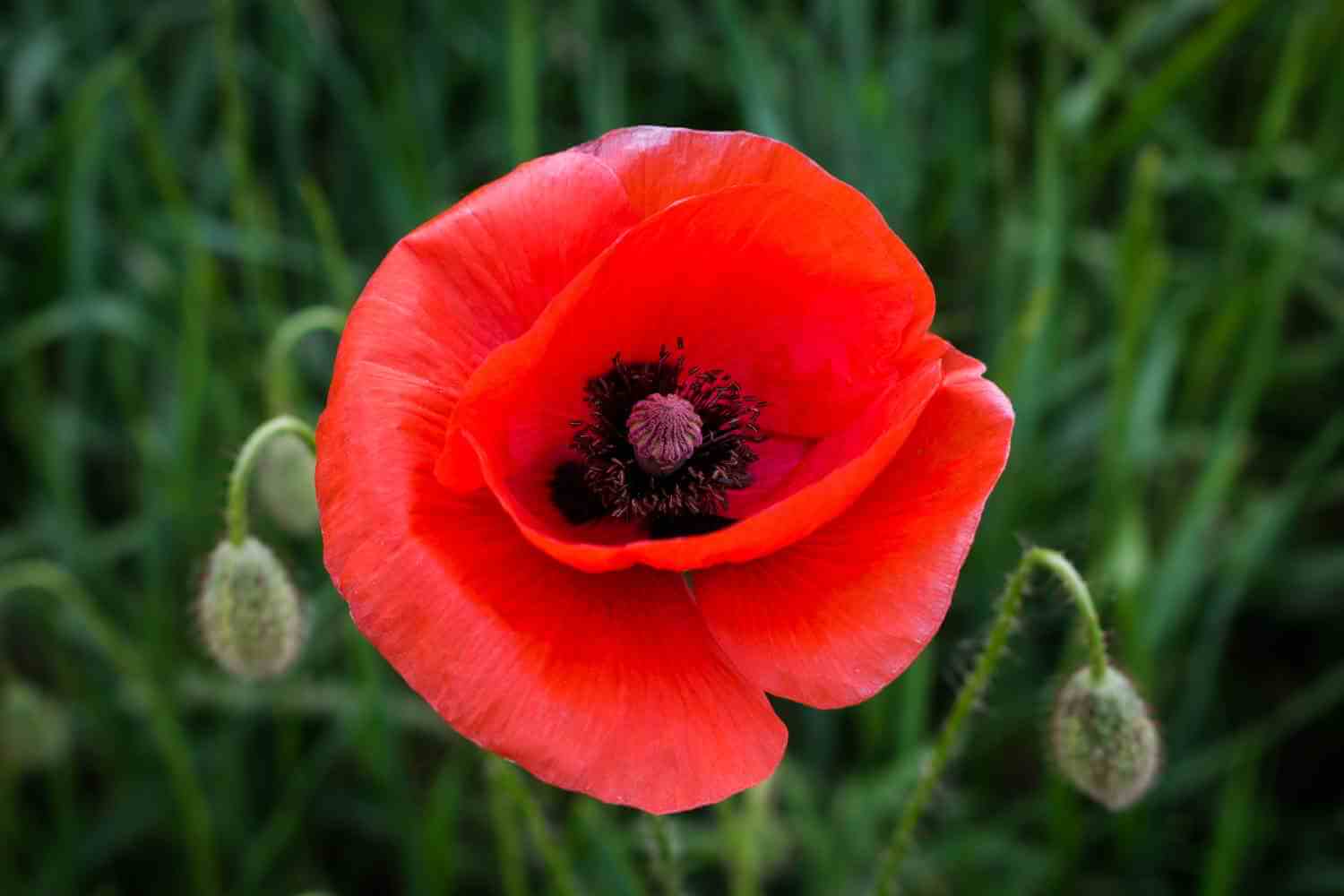 ‘Big Poppy’ is a metaphorical poem about human experiences. Written in Ted Hughes’ usual style, it takes the image from nature and transfers it to a different one. It is a notable poem in his “Flowers and Insects: Some Birds and a Pair of Spiders” collection published in 1986.

In ‘Big Poppy‘ Ted Hughes deals with momentary attraction and pleasure that leads the poppy to its impending doom. Using a simple image from nature, he projects the gender differences and the momentariness of emotions that exist in the human world.

The ‘Big Poppy‘ on the outset is a simple poem about the poppy flower and the bumble bee’s attraction towards the sexuality emanating from the poppy flower. The personified Poppy flower and the Bumblebee demonstrate the sexual attraction between them. The exchange between the flower and the Bee deals with the temporariness of the relationship. The poet’s choice of words and tone clarifies that there is no tender love present. However, in the end, the flower’s extravagance becomes a villain bringing it to its doom.

Ted Hughes begins ‘Big Poppy‘ with the description of the flower in its blooming season. In a well-maintained garden, a poppy flower, with its bright color and attractiveness, is compared to a Mafia queen, who tries to seduce someone with her looks and appearance. In contrast to the first line, in the third line, he says, “she sways towards August” to euphemistic describes that the flower is swaying towards its death.

Clambers into her drunken, fractured goblet—

He’s in there as she sways. He utters thin

The poet diverts his attention to the Bumble Bee, which is drawn towards the beauty of the flower. A bumblebee enters the scene at this point and crawls up a petal to drink nectar from the flower’s center. The sensual pleasure exchanged between the flower and the bee is depicted without holding back on any of the vulgarity of the animal world.

Is falling apart with its own fierceness.

When the Bee is inside the Poppy flower, it “helplessly” embraces the Bee. At this intimate moment, the speaker turns his attention away from the present action and focuses instead on Poppy’s impending doom that is likely to follow soon. The Poppy’s beauty leads to its demise amid her affair with the Bee. It is natural that soon her petals will fall out to allow her seed pod to grow.

A fly, cool, rests on the flame-fringe.

A fly enters the scene while the Bee and the Poppy are in the middle of their affair. The fly sits on the edge of Poppy’s petal is contrastingly “cool” compared to the hot-eyed Poppy. The fly’s role helps the poet to express the shift in the poem’s tone, from lusty to fun.

Soon she’ll throw off her skirts

Coffin — (cradle of her offspring).

In the lines between seventeen and twenty-one, the poet focuses on the center of the Poppy after pollination. In the natural world, it is common for one life to end to pave the way for the other. Here the poet dramatically presents the simple act of the petals whithering to let the seed pod grow, making room for the seeds. He exaggerates, stating that “her own coffin” became the “cradle of her offspring.”

Then we shall say:

“She wore herself in her hair, in her day,

And that stripped, athletic leg, hairy,

In a fling of abandon—”

In these lines, the poet speaks of people’s common attitude towards the flower when it is gone. As one reminiscence over a beautiful lady who is no more, he expects us to describe how beautiful she held herself when she was alive. He is hopeful that the Poppy will be remembered for the “flop of petal,” her dark eye with “sooty lashes”, and her athletic leg and hairy leg. Thus, he assumes people remember the flower as “she wore herself in her hair, […] in a fling of abandon” until her sudden demise.

Ted Hughes in ‘Big Poppy‘ deals with many themes, and some of the dominant ones include Nature, Temporariness of Life, Sexuality, and Gender stereotypes. Like many other poems, Ted Hughes’ choice of setting and the dominant source of influence come from nature. The act of a bee pollinating a flower is metaphorically presented to convey the sexuality between men and women and the temporary human attractions and affairs.

Ted Hughes used “Nature” as the setting of the poem. Like in many of his poems, a simple scene conveys an excellent philosophical idea of life and death. His effective use of sexuality between the flower and Bee depicts the tone and Diction of the poem. The tone and Diction go well together to convey his intended idea. His choice of vocabulary clarifies the degree of urgency and fatalism. To convey that the poppy flower will soon fade, he says, “August is approaching”.

‘Big Poppy‘ by Ted Hughes is a poem of twenty-five lines. The lines are of irregular meters. It is divided into two parts. The poet starts with the beauty of the flower, followed by the impending doom of the flower. A first-person speaker in the poem elucidates the way a bumblebee guzzles nectar from a poppy flower. The poet’s choice of image and line size probably looks like a wild, crazy flower.

The poem ‘Big Poppy‘ uses some of the most famous literary devices like metaphor, personification, imagery, onomatopoeia, and symbolism.

What is the poem ‘Big Poppy‘ is about?

It is about a Bee pollinating a Poppy flower. The flower, all mighty and beautiful, attracts the Bee. Unfortunately, it turns out to be the reason for its demise.

How does Ted Hughes compare the Poppy flower to a woman in ‘Big Poppy?’

From beginning the poem with “Hot-eyed Mafia Queen” to ending with “She wore herself in her hair, in her day, (. . .) And that stripped, athletic leg, hairy,” Ted Hughes tries to infer the similarities between a beautiful woman and a Poppy in all its grandeur. He also draws a parallel between maternal instincts.

What does the relationship between the Bee and the Poppy symbolize?

The Bee and Poppy’s relationship symbolizes the human world where men and women act impulsively for momentary pleasures. What follows their thoughtless action is nothing but doom, as what happened to the Poppy who seduced the Bee with her beauty.

How many characters are there in ‘Big Poppy?’

In this short and straightforward poem of Ted Hughes, he uses three characters to express his understanding of the frivolous animal world. The characters include The Poppy, The Bumble Bee, a fly who meets with a tragic end, and the narrator.

Who is the narrator/speaker of the poem ‘Big Poppy?’

‘Big Poppy‘ is written in a third-person narrative with a speaker who is a bystander observing from the beginning till the end as the flower seduces the Bee till it faces its doom.

Nature is a frequently used theme and setting of Ted Hughes’ poems. When the nature poets often tend to present nature in its best self, his poems depict nature in its all darker and vicious, yet more realistic aspects. Read some more poems of Ted Hughes here.

Attracted towards the Poppy Flower? Then read ‘Poppies in October‘ by Sylvia Plath, ‘Poppies‘ by Jane Weir, ‘Petals‘ by Amy Lowell, and ‘The Poppy‘ by Jane Taylor.

Miz Alb received her MA in English Literature. Her thirst for literature makes her explore through the nuances of it. She loves reading and writing poetry. She teaches English Language and Literature to the ESL students of tertiary level.
Subscribe
0 Comments
Inline Feedbacks
View all comments