Elegy for Jane by Theodore Roethke

‘Elegy for Jane’ was published in Roethke’s 1953, Pulitzer Prize-winning volume, The Waking. This collection is now considered to be one of the poet’s best and most important works. The poem that this analysis focuses on, ‘Elegy for Jane’, is one of the most widely read within The Waking. It uses some of Roethke’s favorite themes and images, those associated with nature and love. He makes use of numerous similes and metaphors that help to paint a picture of Jane, her death, and the love he feels for her. 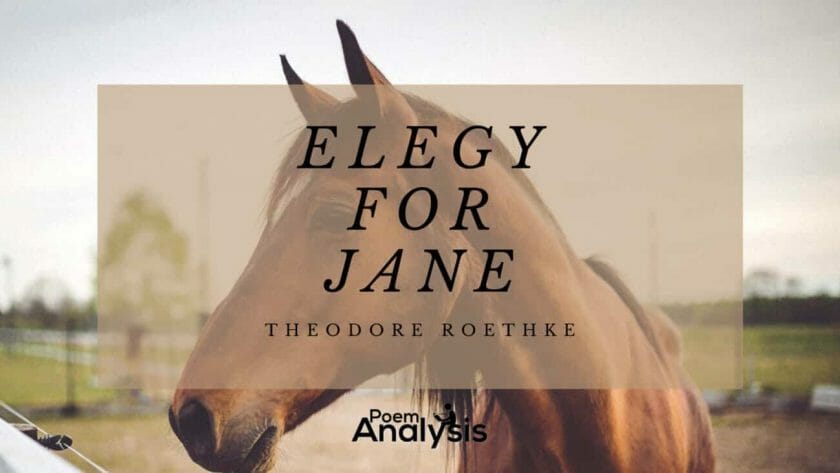 ‘Elegy for Jane’ by Theodore Roethke uses intense natural images to depict a deceased young woman and the love the speaker has for her.

Throughout this poem, Roethke’s speaker uses interesting and memorable images of nature to describe the life of one of his students, Jane. She died after being thrown from her horse and her loss has impacted him deeply. He did not love her as a father or as a lover but he feels in her death the loss of something integral. Since her bird-like presence has left the earth, he has found himself unable to take pleasure in the natural world. The poem ends without a resolution, he is still mourning her and has come to no conclusion about what his next steps should be.

There are several important themes in ‘Elegy for Jane’. The most prominent are nature, love, and death. With these themes in mind, Roethke talks about and around the death of Jane, his speaker’s student. She is compared to numerous natural images and he spends a good deal of time describing how much pleasure he takes from nature. It is at the center of this poem and therefore so too is the process of life and death. He is interested in the youthful presence she represented in life and now in death as well. He mourns her, but also spends time talking about the love he feels. It is more similar to a love for nature than it is a romantic attachment.

‘Elegy for Jane’ by Theodore Roethke is an elegy that does not follow the typical elegiac pattern. The poem is written in free verse, meaning that there is no regular pattern of rhyme or rhythm. Roethke separated the poem into four stanzas. The first of these has nine lines, the second:

Roethke was pushing the boundaries of what love an remembrance can be, a fact which corresponds with his desire not to use a traditional pattern. Another way that he diverges from what readers of elegies might expect, is that there is no consoling ending to the poem. It ends with questions about love still in the air. It’s clear that the speaker feels no one understands his connection to this young woman and what her death has made him experience.

A reader should also take note of the epigraph that comes before the first lines of ‘Elegy for Jane’. The phrase “(My student, thrown by a horse)” appears, providing the reader with a little necessary detail about the funeral he’s attending. The title itself includes the word “elegy,” signaling to the reader that the “student” who was “thrown by a horse” did not survive the accident.

Roethke makes use of several literary devices in ‘Elegy for Jane’. These include but are not limited to examples of personification, metaphor, and simile. The first of these, personification, is seen at the end of the first stanza as the speaker describes nature singing with her, whispering, and kissing.

Metaphors and similes play an important role in this piece. Throughout, Roethke makes use of nature-related images, using them as a way of describing what Jane was like. Some of these are more complicated than others but they are all effective. Take for example his comparison of her sadness to storing the “clearest water” in the second stanza. Here, he is saying that she’s so sad that she’s like a clear pool of water that’s been stirred. All the mud at the bottom has risen up to distort her image on the surface.

I remember the neckcurls, limp and damp as tendrils;

And her quick look, a sidelong pickerel smile;

The shade sang with her;

The speaker begins ‘Elegy for Jane’ by recalling features about Jane, the young female student who was thrown from her horse and killed. Although describing the deceased is a common practice in elegies, Roethke’s approach is strikingly different. He doesn’t speak of her in glowing, beautiful terms. He calls hr hair “limp and damp as tendrils (a good example of a simile) and her smile is compared to a fish. Using natural imagery in the way that Roethke does here is something that he often chose to do. He compares her, thought this stanza, to the wind, birds, landscapes, and light.

Jane was skittish like a bird with light and airy speech, that sounded as if it was leaping from her. Further metaphors and similes follow as Roethke’s speaker compare Jane to a “wren” who is “happy” flying through the air. Her thoughts, words, and general nature make the “Twigs and small branches” tremble. The whole world is with her, connected to he ran the way that all living things are.

The leaves, their whispers turned to kissing,

And the mould sang in the bleached valleys under the rose.

There is a good example of personification at the end of this stanza when the poet describes the “whispering” of the leaves that turn into “kissing”. Additionally, the “mould” is described as singing “in the bleached valley under the rose”. This is a striking and multifaceted image that symbolizes death and is unusual but suitable for the occasion. The bird’s song overcomes this slightly darker image. Her cheery life is capable of uplifting even the darkest of images.

Oh, when she was sad, she cast herself down into such a pure depth,

The second stanza is only four lines long, making it a quatrain. This stanza is focused on her sadness. IT is juxtaposed against the uplifting and happy first stanza. When Jane was sad, she’d enter into such a depth that “a father could not find her”. No one, not even this mysterious father figure was capable of seeking her out. A reader should take careful not of the use of the “a” article in this line. This might make one think of a religious “father” like a priest rather than a biological father. Her depression was so deep that neither family nor religion could pull her out of it.

The final two lines of the stanza provide more images that help the reader imagine with Jane’s sadness was like. She metaphorically rubs her head “against straw,” as if she’s an animal trying to rid itself of an itch or some other discomfort. Her sadness is so strong that its able to “stir” the clear waters, muddying them. The dirt and grim at the bottom of this metaphorical pool come up to the surface and distort the image that was once there.

My sparrow, you are not here,

Nor the moss, wound with the last light.

The third stanza of ‘Elegy for Jane’ is also for lines long. Here, he refers to Jane as a “sparrow”. He also talks directly to her, an example of an apostrophe. Her light is no longer there to console him. Her lovely words and nature are missing and he is unable to find comfort in the remaining nature around him. It is as though she took the best of it with her. There is a good example of alliteration in the third line with “cannot console”.

If only I could nudge you from this sleep,

My maimed darling, my skittery pigeon.

The fourth stanza acknowledges the speaker’s desire to take Jane back from death, or to “nudge” her from “this sleep”. He knows that this is impossible. His “skittery pigeon” is lost forever and he’s only able to talk to her “Over this damp grave”.

Readers should note the repetition of the bird imagery in these last lines. She is compared to a “skittery pigeon,” a lovely image and a very evocative one. By this point, he has outlined her clearly and a reader should have a good understanding of what this young woman was like.

It is in these last lines that Roethke’s speaker first suggests that he loves her. It is not a romantic love that he feels, nor one of a “father”. This is something that he states explicitly in the last lines. His love is something different. It is a love for the kind of life she lived, the youth she represented, and what the loss of that means. He loves her as one would love the light on moss at the end of the day or the sound of bird song.

With the major themes of ‘Elegy for Jane’ in mind, readers might also find themselves drawn to ‘My Heart Leaps Up’ by William Wordsworth. This poem, which is based around love and uses memorable natural imagery is similar in its appreciation of the natural world. In regards to the more sorrowful aspects of Roethke’s poem, readers should seek out ‘Elegy Before Death’ by Edna St. Vincent Millay.

Love is one of the most important themes in this poem. Other poems that use love in a similar way include ‘Love’ by Eavan Boland, ‘Give All to Love’ by Ralph Waldo Emerson, and ‘Rain on a Grave’ by Thomas Hardy.