My Papa’s Waltz by Theodore Roethke

‘My Papa’s Waltz’ by Theodore Roethke is a surprisingly dark poem. It depicts a possibly abusive father who “waltzes” his son to bed.

Theodore Roethke first published ‘My Papa’s Waltz’ in 1942 but it was later included in The Lost Son and Other Poems in 1948.This poem is often considered as an autobiographical depiction of the poet’s own childhood. His father lived a hard life and the line “caked hard by dirt” might reference his profession as well as his nature. 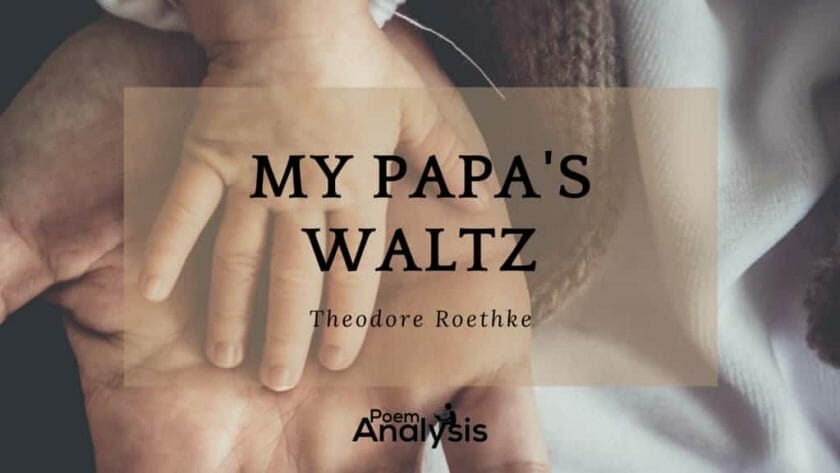 Summary of My Papa’s Waltz

‘My Papa’s Waltz’ by Theodore Roethke describes the complicated relationship between a father and son through the metaphor of a dance.

In the first lines of this poem the speaker describes his father’s whiskey breath, his movements, and how “Such waltzing was not easy”. This waltzing is very soon revealed to be a spinning confusion of patterned violence. It’s clear that this “dance” the two engage in is not new. They “romped” and “waltzed” around the kitchen making a mess, much to the mother’s displeasure until he held his son’s wrist and took him up to bed.

Themes in My Papa’s Waltz

Throughout this poem, Roethke explores themes of father/son relationships and violence. The latter is seen in striking moments in the second half. It is one part of their relationships, but it is not all of it. It’s clear enthuse lines that whatever kind of relationship they have it is filled with difficulties. Their dance represents the complex nature of their relationship, the arguments and physical fights, differences in belief, life goals, and day to day life.

Structure and Form of My Papa’s Waltz

‘My Papa’s Waltz’ by Theodore Roethke is a four stanza poem that is separated into stanzas of four lines, known as quatrains. These quatrains follow a simple rhyme scheme of ABAB and make use of the meter of iambic trimeter. The metrical pattern is not consistent throughout but mostly the lines are made up of three sets of two beats, the fist of which is unstressed and the second stressed. At some points, there is an extra unstressed syllable at the end of a line that interrupts the balance of the meter. This is very directly connected to the off-balance dance that the father and son are engaging in.

Literary Devices in My Papa’s Waltz

Roethke makes use of several literary devices in ‘My Papa’s Waltz’. These include but are not limited to examples of allusion, enjambment, and similes. Throughout this poem, there are allusions to an undercurrent of violence that makes this “dance” all the stranger. In reality, the dance is a metaphor for the more complex relationship the son has with his father. Their off-balance movements represent their inability to understand one another and navigate their lives. But, it is impossible to ignore words like “battered” and phrases like “scarped a buckle” and “held my wrist” that suggest more physical violence.

There is a good simile in the first stanza where the speaker says that he “hung on like death” to his father as they spun and romped through the kitchen. This makes it seem as though the son’s grasp is something inescapable.

Analysis of My Papa’s Waltz

The whiskey on your breath

In the first lines of ‘My Papa’s Waltz,’ the speaker describes the sights and sounds and feelings that the “waltz” evoked. He could smell the whiskey, enough to make him dizzy. He spun, metaphorically, with his father through the house. This “dance” is a metaphor for the relationship the two have. The son holds on like death, trying to remain attached to his father. The word “death” also suggests that the son’s grasp is detrimental to the father. Perhaps he has yet to come to an understanding of how what their relationship is. It was “not easy” to hang on, to stick with his father through his ups and downs.

Could not unfrown itself.

The second stanza describes the metaphorical dance further. The son and father moved through the kitchen, disrupting the balance of the room. His mother disapproved of the whole thing. She was unable to “unfrown” herself. This suggests that she too is used to this chaotic relationship, but she doesn’t approve of it.

The hand that held my wrist

My right ear scraped a buckle.

It is in the third stanza that it becomes clear that there’s something darker going on. The dance is not even as innocent as it appeared up until this point. Words like “battered” and “scraped a buckle” make it seem as though the father beats his son. There is violence in this relationship somewhere and the son is on the receiving end of it.

You beat time on my head

With a palm caked hard by dirt,

The fourth and final quatrain of ‘My Papa’s Waltz’ concludes the poem with the child being sent to bed. He’s still “clinging to” his father’s shirt, unwilling to let go and relinquish whatever semblance of a relationship they have. His determination is admirable even in the face of his father “beat[ing] time on” his head.

Poems about father/son relationships are far from rare. There is any number, positive or negative, to choose from when looking through centuries of poetry. Some of these include ‘my father moved through dooms of love’ by e.e. cummings about his own father, a Unitarian minister. Or, there is ‘Daddy’ by Sylvia Plath, often quoted as one of her most troubling poems. Quite different from Plath is ‘I Will Go With My Father a-Plaughing’ by Joseph Campbell and ‘Those Winter Sundays’ by Robert Hayden.