While Thomas Hardy, poet to ‘Afterwards‘, is best remembered for his novels, such as ‘Jude the Obscure and Tess of the D’Urbervilles, he had a rich lifetime of writing poetry as well. It was to this genre that he turned after intensely negative reactions to his fiction work.

‘Afterwards’ was part of his 1917 volume Moments of Vision. It was, as the title suggests, the last poem in the collection. Its placement at the end of the book also corresponds with its placement in the larger timeline of Hardy’s life. This poem reflects Hardy’s state of mind as he looked at his life and considered what the world was going to be like after he died. 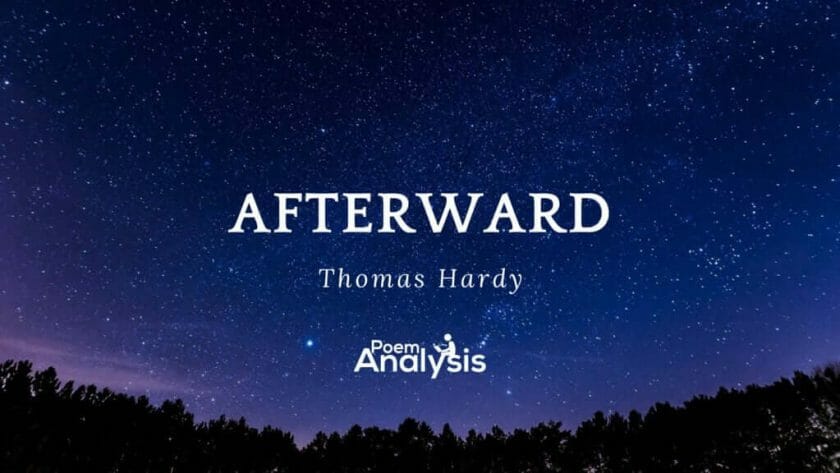 ‘Afterwards’ by Thomas Hardy is a beautiful contemplation of the world, and how it will go one, after one’s death.

Throughout this poem, the speaker poses several different scenarios about what’s going to happen after he dies. He is less interested in the afterlife than he is in the way that those still living will continue on with their lives. Hardy’s speaker poses a number of questions about the world, wondering if his friends will remember him in a favorable light. Will they, he wonders, recall his kind nature, care for the earth, and frequent contemplations of the night sky?

Hardy makes it very clear in ‘Afterward’ the themes that he’s interested in. These include death and mortality, as well as nature and time. Within the five stanzas of this poem, the speaker spends all his time using natural images to talk about the world after he dies. These images range from hedgehogs to stars and to the wind. Each of these is tied into one partial perception of his life that he hopes will last past his death. Although based around the darker subject matter, death, this poem is mostly optimistic. It is the best-case scenario for this speaker that his friends recall him in a certain light.

‘Afterwards’ by Thomas Hardy is a five stanza poem that is separated into sets of four lines, known as quatrains. These quatrains follow a simple, consistent rhyme scheme of ABAB, changing end sounds from stanza to stanza. The meter is less structured. It carries more from line to line, with some phrases longer and some shorter.

Of each of the four lines per stanza, the first three are the most similar. The final, that which is in quotation marks is much more colloquial, reading as if its a genuine piece of dialogue. All of these lines are spoken from the perspective of a neighbor who is considering the speaker after he dies.

Hardy makes use of several literary devices in ‘Afterwards,’ these include but are not limited to enjambment, imagery, and alliteration. The latter can be seen in phrases such as “May month” in stanza one and “comes crossing” in stanza two. Each of these examples, and the others that exist in the poem, help to establish a great feeling of rhyme and rhythm in the poem.

Imagery is perhaps the most important technique in ‘Afterwards’. It can be seen throughout the poem as Hardy depicts the blossoming of new life, the gloomy evening sky, and the “furtive” hedgehog.

There are a few examples of enjambment in the poem which help to influence the pace at which a reader moves through the lines. For example, the transition between lines two and three of stanza two.

When the Present has latched its postern behind my tremulous stay,

And the May month flaps its glad green leaves like wings,

“He was a man who used to notice such things”?

In the first lines of ‘Afterwards,’ the speaker begins by describing something that happens to everyone, death. It is described as the “Present” shutting the back door, or “postern,” on his “tremulous stay” on earth. (Hardy uses personification in this line to describe the present as a force with agency.) A reader should take note of the fact that Hardy is describing going out the back door, not the front. This suggests that he’s going to leave his life without anyone noticing. He’s going to slip out and away from his life. These images of a quiet and unnoticed death are juxtaposed in the next line with images of spring and green life. He is envisioning the world after he’s gone. Everything is going to continue on as it was and new life is going to blossom in the spring.

The final stanza ends with a suggestion about what his neighbors might think about him when he’s gone. Maybe they’ll say that he was a “man who used to notice” such things about the earth. Its curious to consider whether or not Hardy, or the speaker he’s channeling for this poem, felt that these remembrances, which appear at the end of each stanza, were good or not. Is he happy to be remembered as a man who noticed nature carefully? It certainly doesn’t seem like a bad thing but he doesn’t say one way or another at this point.

If it be in the dusk when, like an eyelid’s soundless blink,

The dewfall-hawk comes crossing the shades to alight

Upon the wind-warped upland thorn, a gazer may think,

“To him this must have been a familiar sight.”

In the second stanza of ‘Afterwards,’ the speaker adds more detail to the world post-death. It is dusk and the sky is darkening. He considers the it might be like this when “it” happens, or he dies. The hawk comes out at dusk and flies quietly across the sky to land on a bush while an onlooker blinds soundlessly. This quiet and subdued image is an obvious contrast to the move lively and movement filled ones in the first stanza.

The final line is another suggestion of what a “gazer,” or someone watching the hawk fly, might think of the speaker. This person might think that the sight of the hawk was a familiar one to the dead man. None of these things are set in stone. Hardy’s speaker acknowledges that he may not even be remembered at all.

If I pass during some nocturnal blackness, mothy and warm,

When the hedgehog travels furtively over the lawn,

One may say, “He strove that such innocent creatures should

come to no harm,

But he could do little for them; and now he is gone.”

The third stanza also begins with “If,” making it clear that the speaker doesn’t know how his death will come or what it will be like. These are only guesses. He might die on a warm night in the middle of a summer night. Hardy’s speaker describes the movement of a hedgehog across the lawn, “furtively,” as the land belongs to someone else. He expresses a desire to be remembered as a protector of these creatures.

This stanza contains more possible dialogue, this time from someone remembering the speaker as a man who cared for animals but could do little for them.

If, when hearing that I have been stilled at last, they stand at

Will this thought rise on those who will meet my face no more,

“He was one who had an eye for such mysteries”?

Once more Hardy begins the stanza with “If”. Here, he contemplates the possibility that his friends and companions are going to remember him as someone who loved to stand and look at stars. In his mind, he hopes that his memory will come to those he knew in quiet moments in nature. Each of the images so far has been directly connected to the natural world. This reveals a lot to the reader about what the speaker values.

And will any say when my bell of quittance is heard in the gloom,

And a crossing breeze cuts a pause in its outrollings,

Till they rise again, as they were a new bell’s boom,

“He hears it not now, but used to notice such things?”

In the final four lines of ‘Afterward,’ the speaker adds more one question about his death. He wonders if anyone will “say,” after he’s gone, that he used to notice such things. This is a reference to the movement of the wind, the tolling of the “bell of quittance,” (a church bell that rung to recognize a death), and the way sounds are reborn and made new. Will his friends, he wonders, take the time to remember that he used to care for the beauty of the world but now sees, hears, and feels nothing of it.

The themes that Hardy touches on in ‘Afterwards’ are common within the world of poetry. Poems that contain similar themes and content include ‘Thanatopsis’ by William Cullen Bryant and Emily Dickinson’s ‘I heard a Fly buzz-when I died’. Readers might also be interested in other poems that focus on contemplations of death such as ‘Do Not Stand at my Grave and Weep’ by Mary Elizabeth Frye and ‘When I Have Fears That I May Cease to Be’ by John Keats.