Thomas Hood was born in London, England in May of 1799. His parents were Thomas Hood and Elizabeth Sands and the family lived in Cheapside above their bookshop. Hood’s father died in 1811 and Elizabeth moved the family to Islington. While enrolled in school there, Hood’s writing talents were noticed by a headmaster who encouraged him. In 1788 he was able to earn a small amount of money for editing the novel, Paul and Virginia. When he was fourteen years old he left this headmaster and he was forced to take up work in a countinghouse. The environmental conditions of the profession damaged his already weak health. 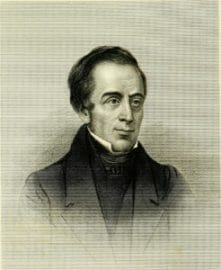 In an attempt to improve his health, he took up engraving. It is unclear how exactly he learned the trade, possibly via an apprenticeship or private study. Unfortunately, engraving proved to be just as detrimental for his health. Hood went to Dundee, Scotland to recover alongside some of his father’s relations. Hood was there for a number of months, boarding with his aunt, Jean Keay. Due to strained relations between the two, he then moved into another boarding house.

This period saw Hood spend a great deal of time outside while also dedicating all spare moments to reading. Hood committed himself to write poetry and his first work appeared in print. It was a letter to the editor of a local newspaper. His abilities improved and along came more opportunities to contribute his writing to newspapers and magazines. Hood returned to London in 1818 and took up his engraving practice again. It was through this art that he would devote himself to illustrating his more light-hearted works.

In 1821, after the death of the editor of The London Magazine, Hood was made sub-editor of the publication. This new position allowed him to associate with other writers such as Allan Cunningham, John Clare, and Charles Lamb.

Three years later Hood married Jane Reynolds. This was the same year his collaboration with her brother, J.H. Reynolds, Odes and Addresses to Great People, was written. He published the volume in 1827. That same year he also published Whims and Oddities and National Tales. These came alongside the collection of verse, The Plea of the Midsummer Fairies, Hero and Leander, Lycus the Centaur and other Poems. This volume is considered to be his only serious collection of verse. He is best known for humorous and light-hearted pieces that came later on in his career. The Plea of the Midsummer Fairies… was not a success. It is largely ignored by critics and readers alike.

This collection was followed by The Epping Hunt, a work that was illustrated by well-known artist George Cruikshank. It was in the 1830s that Hood left England and traveled throughout Europe. He spent a period of this time with his family in Belgium. The landscapes of the country are directly related to the book, Up the Rhine, which was published in 1840. It was also in the ’30s that Hood took on the series, the Comic Annual. This was a publication that was extremely popular at the time and to which Hood contributed caricatures and humorous, good-natured illustrations. Although he was having some success, Hood was once again suffering from poor health.

The Song of the Shirt

In 1843 Hood’s best-known piece, ‘The Song of the Shirt’ appeared in a Christmas edition of Punch, a British weekly magazine of satire. It was originally published anonymously and became incredibly popular. After its publication The Times, and a number of other newspapers re-published it. The work would later be printed on broadsheets and translated into German. It told the story of a London seamstress who was forced to illegally sell the shirts she had made in order to feed her children. This was one of Hood’s rare, serious pieces of verse.

It was in part due to his personal situation that he received a grant from the Royal Literary Fund in 1841. The organization rewarded civil pensions to literary men. A number of Hood’s friends had applied for the grant for him, knowing of his increasing debts and illness. Hood’s wife, Jane, was not much better than her husband. She too was ill and made more so by tending Hood. Jane died eighteen months after her husband.

Thomas Hood died in May of 1845 at No. 28 Finchley Road in London. The home is now marked by a blue plaque recognizing his life and accomplishments.