Thomas Moore was born in Dublin, Ireland in May of 1779. His father, John Moore, and mother, Anastasia Codd Moore, had two other children, girls named Kate and Ellen. From a young age, Moore showed an interest in all manner of performing arts, but especially music. He appeared in a number of different plays alongside friends, one of which was titled The Poor Soldier. For a limited time in his youth, he thought he might become an actor. It was due to his mother’s influence that he was engaged in the arts at such a young age.

Throughout his early years, he attended schools throughout Dublin. These included Samuel Whyte’s English Grammar School in Grafton Street. It was here he learned to speak in an English accent, a habit he would keep throughout his life. It was in 1793 that he contributed his first verses for publication. They appeared in the Anthologia Hibernica, a Dublin periodical. 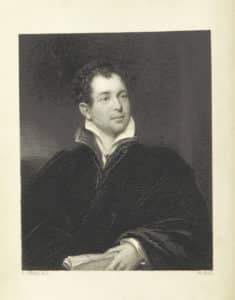 In 1794 he was one of the first Catholics admitted to Trinity College. He began his studies in 1795 with the financial backing of his father. Moore was on a path to become a lawyer, a career his mother saw as fit for the young man. While enrolled at the college he was at first, a good student. He was known throughout the school for his wit and literature. During his time at the school, the backlash from the French Revolution caused a rift within the student body. A number of his friends were members of the United Irishmen.

After graduating, he traveled to London where he studied law at Middle Temple. The young man struggled to pay his bills and tuition and began to rack up quite a substantial debt. He has close friends who ended up helping him pay off what he owed. He graduated in 1799 but put his training to the side in favour of finishing his translation of the poems of Anacreon. They were published in 1800 under the title, Odes of Anacreon. He dedicated the volume to the Prince of Wales whom he met towards the end of the same year. After this point in his career, he came to be known as “Anacreon Moore.”

In 1801 he published Poetical Works of the Late Thomas Little Esq. This volume contained his early poetic works and was published under a pseudonym. The collection did not bring any substantial financial relief to the writer but it did further his reputation as a lover of women. Due to his inability to manage his own finances, he was forced to take a position in the government as a registrar of the admiralty prize court in Bermuda. It was a position that forced the poet to leave London. He sailed for Norfolk, Virginia on 25 September 1803. He was there for two months before leaving for a nine-month tour of the eastern United States and Canada.

Moore was disappointed in America and returned to England where he recorded his experiences in, Epistles, Odes, and Other Poems, published in 1806. His criticism led to a number of rebuttals from prominent Americans.

In 1811, Moore met and married the actress, Elizabeth Dyke. He kept the marriage secret, for a time, from his parents who may have disapproved of her lack of dowry. Moore’s writing was bringing in a substantial amount of money but as had become the pattern in his life, he was unable to manage it. He was soon in debt again, a fact which added to the unhappy state of his marriage. It was also around this period of time that he wrote, M.P., a comedic opera that received good reviews from critics.

In 1819, after the Admiralty Court ruled against Moore, exposing him to the debt of £6,000, he moved to France. Moore lived in Paris until 1822 when the debt had finally been paid off by an advance and help from a wealthy patron. It was after Lord Byron’s death that Moore edited and published, Letters and Journals of Lord Byron, with Notices of his Life, in 1830. It was also during these years that he had finally settled in Sloperton Cottage at Bromham, Wiltshire. His later years were plagued with grief as all five children died. Moore suffered a stroke in early 1850 and died in 1852 while being cared for by his wife.