Timothy Thomas Fortune was born in Marianna, Florida in October of 1856. His parents, Emanuel and Sarah Jane Fortune were enslaved at the time of his birth, meaning that he too was born into slavery. Fortune began his education at the first school in Marianna for African-American children after the end of the Civil War. 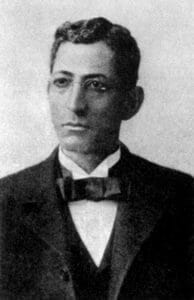 A few years later the family moved to Jacksonville. Here he attended Edwin M. Stanton School, an institution that would later become Stanton College Preparatory School. In 1869 Fortune’s father was elected as one of two African-Americans to the Florida House of Representatives. There was a massive backlash from the Ku Klux Klan, forcing the elder Fortune to flee the area for a number of months. In his absence, Timothy Fortune, who was only thirteen years, became the man of the house.

Over the next years, he worked as a page at the state senate and as an apprentice at a local newspaper. He also spent time at the Marianna Courier and the Jacksonville Daily-Times Union. It was these early experiences with the newspaper business that paved the way for his later career at The New York Age. Before a successful career in writing and publishing though, he worked as a mail route agent in 1874, then later as a customs inspector. He resigned from this position so that he could attend Howard University. Before this point, his education had consisted of three years of formal instruction.

Fortune was unable to finance an entire course of study at the university and left after a year. During this period though he did complete law courses before changing his focus to journalism. After leaving school he found work at the People’s Advocate in Washington, D.C.

Over the next decade, Fortune published the works of African-Americans who were frustrated with the two-party system and the treatment of freedmen. In 1881 he became the editor of the New York Globe. In 1886 he published The Negro in Politics. This work spoke out against the treatment of African-Americans by the Republican Party. These opinions, which were contrary to those of Frederick Douglass, lost him the control of the paper. This did not stop his career though.

In 1890 he was elected chairman of the executive committee of the National Afro-American Press Association. In the same year he founded the National Afro-American League, a militant organization focused on righting the wrongs perpetrated against African-Americans. They focused on instances in which the law authorized such behavior. Unfortunately, this organization only lasted for four years before falling apart.

It was reformed in 1898 in New York with the name National Afro-American Council. Fortune became the president in 1902. His term lasted until ’04 when he was succeeded by William Henry Steward. Other prominent African-American leaders were part of the organization. These included Booker T. Washington, Ida B. Wells, and W. E. B. Du Bois. The National Afro-American Council is credited with paving the way for the Civil Rights movement and the NAACP.

In the 1890s Fortune was the co-owner of the New York Age. Under his leadership, alongside Emanuel Fortune, Jr., and Jerome B. Peterson, the newspaper became the most widely read of all papers aimed at an African-American audience. One of its prominent features was the editorials written by Fortune himself. They were filled with calls for action against discrimination and demands for equal rights for all African-Americans.

In 1898 he published the book, The Kind of Education the Afro-American Most Needs. Dreams of Life: Miscellaneous Poems followed in 1905. Shortly before his period Fortune moved to Red Bank, New Jersey to his home Maple Hill. Fortune’s health was failing in the early 1900s, in part due to his continual drinking and to a nervous breakdown, he suffered in 1907.

During the later years of his life, Fortune published The New York Negro in Journalism and became an active participant in the Republican party. In 1923 he came an editor of the Negro World, a paper published by the Universal Negro Improvement Association and African Communities League. The paper had a large circulation, reaching somewhere around 200,000 people in the United States, Canada and even reaching into the Caribbean and Central America.

Timothy Thomas Fortune died in 1928 at the age of seventy-one. He is remembered today as a visionary whose writings are as important as those of Frederick Douglas and integral to those still to come.