‘Fallen Apples’ appears in Tom Hansen’s poetry collection “Fallen to Earth”. This poem records the movement of wasps through the apples fallen the night before. 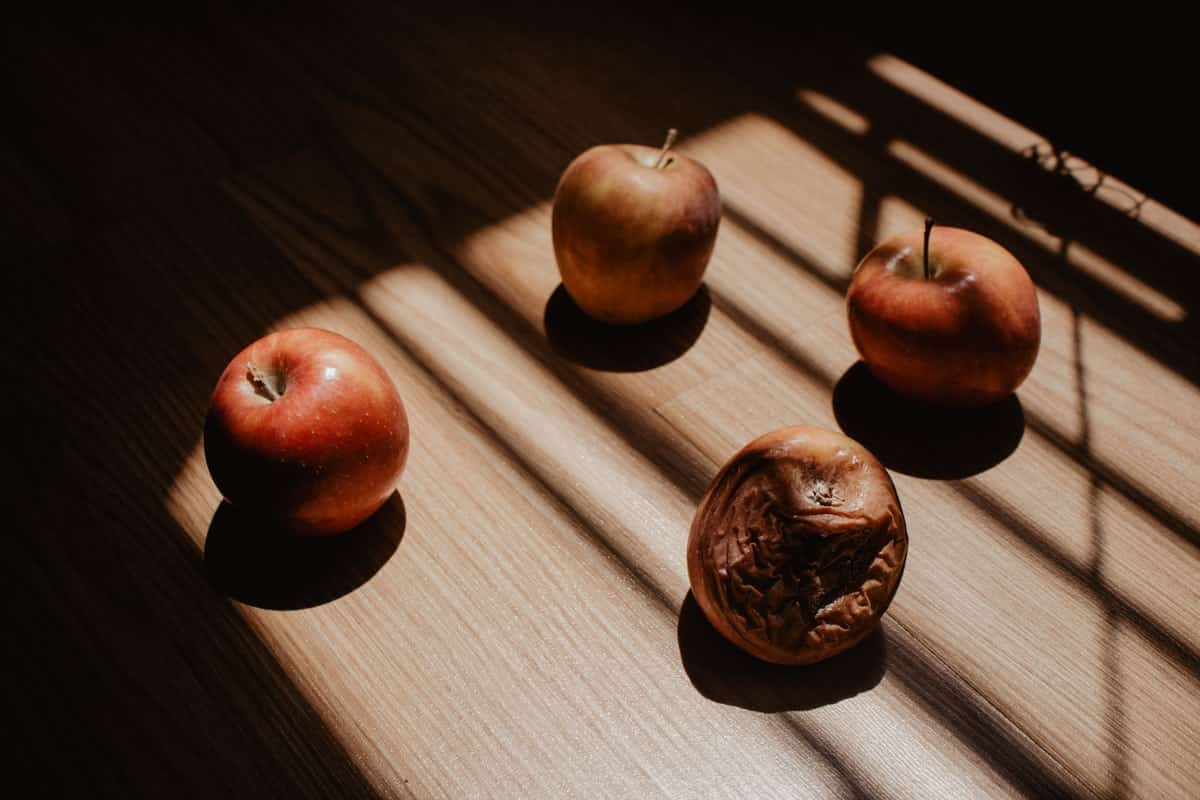 Tom Hansen’s ‘Fallen Apples’ is an image-rich poem. Though Hansen refers to the fallen apples by the title, this poem is not about the features of such apples. This piece is about the wasps feasting on the apples that have already started rotting. Hansen beautifully describes the wasps and their movement through the soft flesh of apples. It seems that the poet is hinting at the idea of intoxication through the metaphor of wasps.

‘Fallen Apples’ by Tom Hansen is about how a swarm of wasps gathers on some rotten apples and the way they fly away when disturbed by the speaker.

The poem begins with a reference to the wasps that mint some rotting apples. They have a feast on the apples all day long. The speaker is particularly surprised by their hushed movements. To look at them more closely, he picks up a mushy one and carefully turns it over his hand. It makes the wasps fall on his hand. He observes how they roam around his hand and comes out of their intoxication. In the end, they fly out of his sight.

Hansen’s poem ‘Fallen Apples’ consists of four stanzas. The first stanza contains five lines. The following two stanzas have six and seven lines respectively. There are six lines in the last one. This poem is written in free verse as it does not contain a regular meter or rhyme scheme. It is told from the perspective of a first-person speaker who is none other than Hansen’s poetic self (persona). The poet creates internal rhyming by repeating similar sounds between the lines.

The important literary devices used in this piece are mentioned below:

Wasps at work in the soft

Tom Hansen’s poem ‘Fallen Apples’ presents the image of rotting apples and the wasps working on them in the first stanza. The title of this piece gives a hint that the poem is going to be centered on fallen apples only. But, Hansen talks about the apples that have already started rotting or began decomposing. In this way, the poet utilizes the theme of decomposition and death.

Wasp is a winged insect having a narrow waist and a sting. Hansen’s speaker finds a swarm of wasps around the “soft flesh” of those apples. Here, the poet metaphorically compares the apples to a human body. In the following line “Food of the gods,” readers can find a biblical allusion. Here, the poet is referring to the forbidden fruit of the garden of Eden.

He depicts how the wasps feed on the apples. For depicting their action, he compares the insects with miners. He thinks as if the wasps are mining the apples silently.

I pick up a mushy corpse

bowl of my hand.

The poetic persona picks up one of the rotten apples on one cold morning. He describes the apple as a “mushy corpse”. This phrase contains a similar metaphor as present in the previous stanza. Hansen compares a rotten apple to a human corpse. Besides, the “cold morning” creates a chilling mood inside the text. He turns it over with care. It makes the congregation of wasps tumble on his hand that is compared to a “cupped bowl”.

This stanza deals with the speaker’s interest in the wasps. It seems the way they gather around the apple arrests his attention. Readers can understand that the speaker of this piece is a keen observer of nature. Nothing is insignificant in his eyes. That’s why he can write a beautiful poem based on this simple context. It taps on some deeper ideas as well.

in search of something

In the third stanza, the poet describes how the speaker’s action disturbs the wasps. According to him, it makes them dazed. Their movement on his hand reflects that they are in a state of intoxication. The juice inside the mushy, rotten apples has made them drunk.

The wasps have been sucking the rotten fruit since yesterday night. For this reason, they are chilled from the cold outside. When they are shaken off their source of intoxication, they move as if they are sleepwalkers. A person who walks in sleep is unaware of whether he is walking or not. Likewise, the wasps cannot grasp what has happened recently. They are still feeding on the apples mentally.

The insects roam around to feel the warmth of light. They nod their tiny antennae to test where they are after waking up from their dream. Still, they are in search of something that is absent.

Their behavior contains a metaphorical reference to human nature. Human beings are basically lovers of comfort and stability. They do not think that their source of happiness or stable life can shift at any moment. For this attitude, we become confused when something does not happen according to our wishes. That’s why it is said that human beings struggle to cope up with change just like the wasps mentioned in the poem.

Warmed by my hand,

and whine at last out of sight.

The last stanza of ‘Fallen Apples’ describes how the wasps fly out of the speaker’s sight. In the first two lines, readers can find the use of anaphora. These lines begin with the word “warmed”. Firstly, the wasps are warmed by the speaker’s hand. The sun is the second source of warmth to them. It makes them aware of the change that occurred recently.

Like an inebriated person, wasps stagger and fall while trying to fly. They try to fly but in vain. When they flap their wings, it makes their body move in a circular motion. The poet describes their movement as scribbled orbits. At last, they fly away by making a whining sound. It means they have come to their senses in the end. For the absence of the fallen apple, they make a complaining sound before departure.

The poem ‘Fallen Apples’ was published in Tom Hansen’s first book of poetry “Falling to Earth”. It was published in 2006. Hansen was awarded the A. Poulin, Jr. Prize in Poetry for this book. He retired to the Black Hills. There he lives on hilly, rocky, ponderosa-covered land with his wife. Hansen is fond of nature. So, he took a natural resort in his old age. In this poem, in particular, readers can find Hansen’s keen sense in observing nature closely. His depiction of the wasps feeding on the rotten apples reveals how a simple scene of nature can contain deep significance.

What is ‘Fallen Apples’ about?

This poem is about a swarm of wasps that mine on some rotten apples and how the speaker’s intrusion in their feast makes them unsettled.

Who is the speaker of ‘Fallen Apples’?

The speaker of this piece is the poet Tom Hansen. His poetic persona describes the scene to readers.

What type of poem is ‘Fallen Apples’?

Tom Hansen’s ‘Fallen Apples’ is a free-verse lyric poem that is told from the first-person point of view.

The main themes of this piece are intoxication, change, death, and life.

What is the meaning of ‘Fallen Apples’?

The title of this poem contains a metaphor. It seems to be a metaphor for aging and death.

The following list contains a few poems that are similar to the themes present in Tom Hansen’s lyric ‘Fallen Apples’.

You can also read about these incredible death poems and thought-provoking poems on change.