W.H. Auden published ‘Refugee Blues’ for the first time in 1939. In it, the poet details the plight of Jews fleeing from Nazi Germany without anywhere to take shelter. By speaking so powerfully on this topic, the poet is able to make connections to historical and contemporary instances in which a similar pattern of oppression, fear, and isolation was playing out. 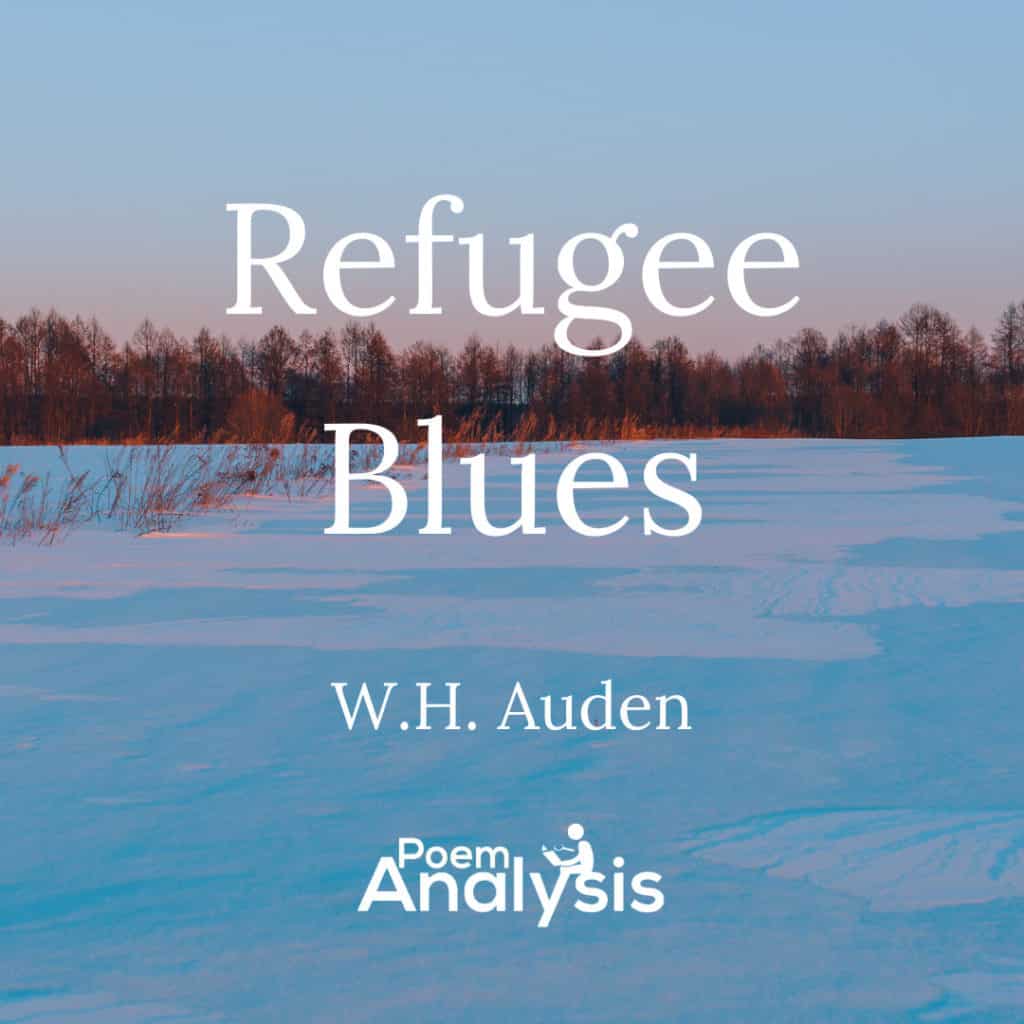 ‘Refugee Blues’ by W.H. Auden is a powerful poem that describes the plight of German Jews seeking a refugee from the policies of Nazi Germany.

The speaker begins this poem by suggesting that there are 10 million people in “this city”. He tells the listener, someone, he loves, that despite this there is nowhere for them to live. He reminisces on the past, the life they used to have, and the safety of their old home. But, things have changed and new demands and policies made by Nazi Germany are forcing the speaker and his family out of the country.

The speaker also traces the various times he sought out help or tried to understand what was going on and was met with hatred and fear. There is no one who cares about the plight of this Jewish man and his family. The poem ends on a  haunting note with the speaker painting an image of a big field in which ten thousand soldiers marched, looking for them.

There are several important themes that a reader should consider in ‘Refugee Blues’. These include anti-semitism, isolation/loneliness, and exile. The first, anti-semitism, is one of the factors in this poem that results in the other themes. It is due to the policies of Nazi Germany that the speaker in this poem and his family were forced to flee the country. But, unfortunately, many of the countries that Jewish refugees escaped to were unwilling to accept them in the numbers they were arriving in. Many were sent back where they came from. The anti-semitism functions on both sides of this situation.

The speaker’s loneliness, despite the relationship he has with the intended listener, is clear. He has lost the place that he calls home and no one that they encountered has shown him kindness or been truly willing to help him. He has become an exile from his entire life as well as the rights that he should’ve had access to.

‘Refugee Blues’ by W.H. Auden is a twelve stanza poem that is separated into sets of three lines, known as tercets. These tercets follow a simple rhyme scheme of AAB. It is interesting to consider what this particular pattern does to the way a reader understands the poem. The first two lines are paired together, creating a perfect rhyme. But, the third line stands out. It is alone without a paired end-rhyme. Unlike the consistent rhyme scheme, the meter does not conform to one pattern. They vary in length from around nine syllables to fourteen.

The word “blues” in the title provides the reader with some information right away about the tone and mood of the poem. It suggests loneliness, sadness, and even sorrow or mourning.

Auden makes use of several literary devices in ‘Refugee Blues’. These include but are not limited to repetition, allusion, and caesura. The latter, caesura, occurs when a line is split in half, sometimes with punctuation, sometimes not. The use of punctuation in these moments creates a very intentional pause in the text. A reader should consider how the pause influences the rhythm of one’s reading and how it might precede an important turn or transition in the text. For example, the last line of each stanza is interrupted with “my dear” in between the varying repeating phrases.

Repetition is itself a very important technique in ‘Refugee Blues’. The best examples come at the end of each stanza where the first half and second half of the line are identical. From stanza to stanza this repetition has a different impact. But, overall, it serves to remind the reader how hopeless and inescapable their situation was.

An allusion is an expression that’s meant to call something specific to mind without directly stating it. With this technique Auden is able to speak about Nazi Germany in the first few stanzas without ever having to say the name of the country or the time period. The speaker makes allusions in the last stanzas to the ways that Jews were being hunted down in Germany and beyond.

In the first stanza of ‘Refugee Blues,’ the speaker begins by painting a picture of a city. This place, somewhere in Germany, is large. It’s filled with people, some of whom live in mansions and some in holes. This image depicts for the reader the enormous wealth disparity that existed in his home. But, despite this range of homes, there is nowhere “for us,” he says. The speaker and his family are German Jews, trying to figure out where they will be safe as Nazism and wider spread anti-semitism take over Europe.

A reader should also take note of the very effective repetition of the phrase “there’s no place for us”. It takes on a mournful quality as the speaker expresses, through just this line, his exhaustion, and disappointment.

Once we had a country and we thought it fair,

In the second stanza of ‘Refugee Blues,’ the speaker adds that “Once” he and his family, as well as his people, had a home. It was a place they could call their own. One could look in an atlas and find it there. It was a physical location, not just a metaphorical one. But as has already become clear by this point they can’t go back there. The phrase “We cannot go there now” is repeated in the last line of this stanza. This same technique is used in the following stanzas as well, adding to the already quite musical quality of the poem.

In the village churchyard there grows an old yew,

The consul banged the table and said,

The speaker recalls, through a powerful memory, the sight of a yew tree that grows in a churchyard. It’s something that he’s very familiar with but that now he’s entirely separate from. It “blossoms anew” each year without fail. But, he adds, “Old passports” don’t have that same ability. This alludes again to the inability to go home and the way that they’ve been effectively exiled from their own lives. Everything they thought belonged to them, including their citizenship, is lost.

The next stanza brings in the idea of the passport once more. Since the speaker has lost his right to live in his own home, the “consul” tells him to his face that he’s “officially dead”. This is a shocking and disturbing conversation, one that relays the true difficulty of the situation that the speaker and his family are in.

Came to a public meeting; the speaker got up and said;

“If we let them in, they will steal our daily bread”:

The bureaucratic difficulties of figuring out where to go and how to live are increased in the next stanzas. The speaker relays his attempts to speaker t someone, find out what to do, or receive someplace of information that should direct him towards any new destination. Everywhere he goes and everyone he talks to stymies him. The unnamed “committee” tell shim to come back “next year”. This fact inspires him to the repetition of the phrase “Where shall we go to-day”. By repeating this important and sorrowful line the speaker is expressing his exasperation and fear. He doesn’t know how to take care of those he loves.

The next stanzas reveal exactly what it is, at leas tin part, that the other countries fear in regards to letting in meow refugees. Someone at ta meeting tells the group that they’ll take something from the citizens already living in the country. This is a familiar reprise, something that is still quite prevalent today.

Thought I heard the thunder rumbling in the sky;

It’s not until stanzas seven and eight that it becomes clear to the reader if one does not have background knowledge, that this person a German Jew and that he’s fleeing Hitler. Hitler’s voice and his declaration “They must die” are compared to “thunder rumbling in the sky”. This metaphor depicts how powerful the man was and how his decrees had a god-like power at the time. His reach expanded all over the speaker’s world.

A home, safety, a roof over one’s head, all of these things are extended to other people but not to “German Jews”. It is this designation that keeps the speaker and his family from being able to enter into other countries. The anti-semitism is not reserved for Germany alone.

Went down the harbour and stood upon the quay,

Saw the fish swimming as if they were free:

They had no politicians and sang at their ease:

The next two stanzas depict the freedom the speaker sees in the world. Various animals, fish and birds, have the ability to live their lives as they see fit. But, they aren’t “German Jews”. They aren’t “the human race” and are not subject to its laws, just or unjust.

Dreamed I saw a building with a thousand floors,

A thousand windows and a thousand doors:

The eleventh stanza contains a dream the speaker imagined. Ne in which a building stretched over his dead with thousands of floors, doors, and homes. Not a single one of them was “ours,” he says. This building is a metaphor for the isolated life the family is leading and the way that they feel exiled from the human race entirely.

The building might also be considered a symbol of the modern world and its past achievements. A symbol that shows the reader that despite these achievements there is no place of the family.

The last stanza ends with a haunting image of soldiers pursuing the family across a “great plain in the falling snow”. The plain is very likely a symbol for all the countries all over Europe that were unwilling to accept German Jews in any considerable number.

They were “looking for you and me”. There is no conclusion to the plight of this family and for the thousands like them in the next of the poem. But, unlike when Auden was writing ‘Refugee Blues’ the entire history of the Holocaust is now known. It is too easy to imagine what happened to this speaker and his family.