The Love Feast by W.H. Auden

The title of ‘The Love Feast’ references an early Christian ritual in which followers would gather, feast, and celebrate. Not much is known about these occasions and the historical speculation is reflected in the lines of the poem. Auden brings in contemporary, as well as historical, religious references in order to craft a world of people around this feast. God is present, but not always at the forefront. 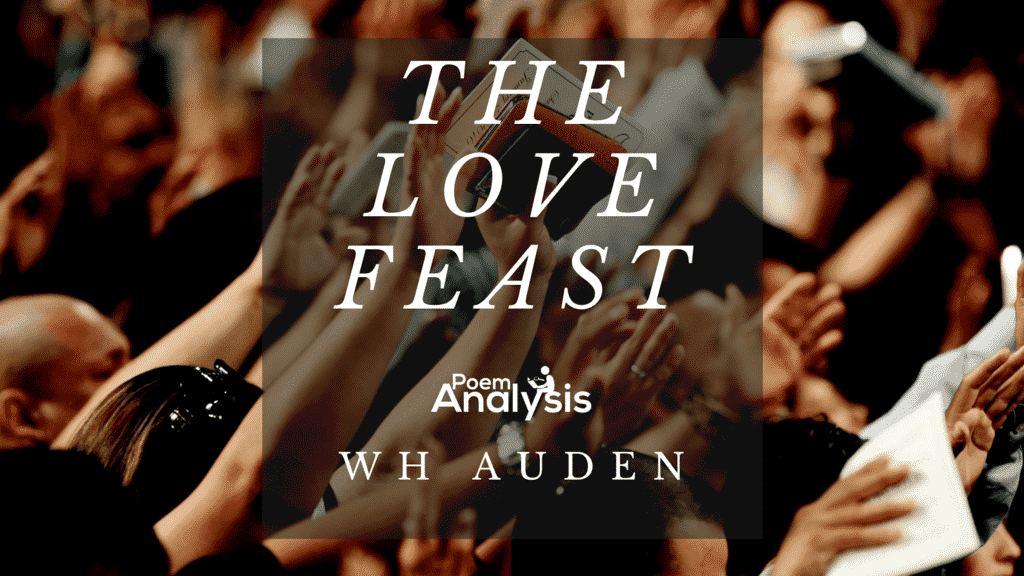 Summary of The Love Feast

‘The Love Feast’ by W.H. Auden is a complex poem that depicts contemporary life alongside religious intention and structure.

Throughout this poem Auden brings together, is a somewhat religious context, characters who interact, argue, love, and lust after one another. He creates several interesting examples of juxtaposition as his men and woman become distracted from the purpose of the feast, acts sinfully, but at the same time acknowledge God. This poem has several different interpretations, especially after getting to the final stanza and the speaker’s cliffhanger ending.

Themes in The Love Feast

In ‘The Love Feast,’ Auden engages with themes of religion and free will. These two things, which are diametrically opposed at some points, are existing side by side in ‘The Love Feast’. The characters in this seven stanza poem are religious, believe in God and his power but, at the same time, scripture is not dictating everything they do. Their free will is not compromised by divine declarations or demands. The people that Auden writes about in this piece are free, yet they are also always drawn back to their own sinfulness, a desire to be good and please God, and an inability to commit to living cleaner lives.

‘The Love Feast’ by W.H. Auden is an eight stanza poem that is separated into sets of four lines, known as quatrains. These quatrains follow a simple rhyme scheme of ABCB, changing end sounds from stanza to stanza. The meter is not perfectly consistent throughout the poem but the majority of the lines have between six and nine syllables per line. Despite this fact, there are some good additional examples of rhyme, in this case, half-rhyme, that help the poems’ rhythm. For example, “radio” and “phonograph” in stanza one and “Willy” and “Lilian” in stanza three.

Auden makes use of several literary devices in ‘The Love Feast’. These include but are not limited to allusion, enjambment, and alliteration. The latter is a structural device that is used to increase the implied rhyme and rhythm in a text. For example, “Jack” and “Jill” and “Mark” and “Molly” in stanza two. Enjambment is another important literary device that accomplishes something similar. In this case, it helps to control the speed at which a reader moves through the text. For example, readers can look to the transition between lines one and two of the first stanza and three and four of the fifth stanza.

Allusions are perhaps the most important technique at work in ‘The Love Feast’. In the poem, a close reader can find numerous allusion to the Bible, the tenants of Christianity, and various other religious texts and ceremonies. For example, in the third stanza, there is a reference to “Catechumens” or converts who are preparing for baptism.

Analysis of The Love Feast

In an upper room at midnight

See us gathered on behalf

Who has the hots for Jack.

In the first stanza of ‘The Love Feast,’ the speaker begins with the speaker describing a group, details of which will be revealed later, that is gathered in an “upper room at midnight” to celebrate the gospel. This stanza suggests that the group is there in order to celebrate their faith and express their love for God. The addition of the “radio-phonograph” brings the poem into the twentieth century.  But, the second stanza changes that.

Rather than focusing on the Bible or on the teachings of Christ, they are talking to one another—spreading gossip. The second stanza is filled with names, complicated relationships, and information about who likes who, etc. Phrases like “hots for” and “worships” are contrasted against the initial religious-seeming setting. The poet uses the word “worship” not to talk about Christianity but to talk about a crush.

Permits what He forbids.

The third stanza beings with the word “Catechumens”. This refers to someone who is covering to Christianity and is prepared for baptism. They make their “entrance” into the scene, something that should be highly ritualized and transcendent is made mundane with the description of “vomit” and crying. Eyes are more interested in “tits and baskets” than in what’s going on in the scene.

The fourth stanza provides more information about the gathered group. There is “Willy” and “Lilian” who both have their own issues to deal with but who should be focused on Christ. The poet also speaks about the “Love” in contrast to “Him”. This suggests that the deepest of human nature allows something that God, at least the God of scripture, does not. This refers to the religious belief that divine proclamations and expectations do not limit human free will. Despite what God might like, humans can still do as they please.

In a sinner’s lap lies curled;

Tells me to go home.

Another good example of juxtaposition begins the first line of stanza five. Here, Auden’s speaker describes the “dachshund” as “pleasure-loving”. He’s curled up in “sinner’s lap[s]” while members of the congregation remain uncommitted and absent-minded. The contrast of “sinner” and “sinless” is interesting. It’s not entirely clear what the poet was going for here, but perhaps he was interested in the way that sinners see themselves and the world as without sin. What is clear is that this group might have good intentions, at least sometimes, but is not as committed as some might like them to be.

In the sixth stanza, Jenny makes a metaphorical “collect call” to Rome. She’s praying, lying, and the speaker is aware of that. By using Rome in this poem, Auden is making a direct allusion to the Catholic church.

But that Miss Number in the corner

Make me chaste, Lord, but not yet.

The final stanza is a clever conclusion to the poem with suggestions of impropriety and clarity of mind in regards to sins and what’s right and wrong. The last line of the poem alludes to a phrase from St. Augustine’s Confessions. It is yet another example of Auden’s knowledge on the subject of Christian texts and the multilayered nature of the poem. What kind of person is this speaker going to turn out to be?

Readers who enjoyed this poem should also consider looking into some of Auden’s other best-known poems. For example, ‘In Memory of W.B. Yeats’ and ‘Funeral Blues’. These two poems are different from ‘The Love Feast,’ but they show off Auden’s powerful verse and his range. Also, check out our list of 10 of the Best W.H. Auden Poems to read even more of his best works. Thematically, readers might also be interested in ‘The Black Heralds’ by César Vallejo and ‘Auguries of Innocence’ by William Blake.