One of the Lives by W. S. Merwin

‘One of the Lives’ was published in 1996 in Merwin’s collection The Vixen. The poem is typical of Merwin. He uses no punctuation, sporadic line breaks, and touches on some of his favorite themes including family and existence. One of the most obvious formal features of this poem is the way that the lines flow. They move smoothly, one into the text, to create a peaceful and calm mood. 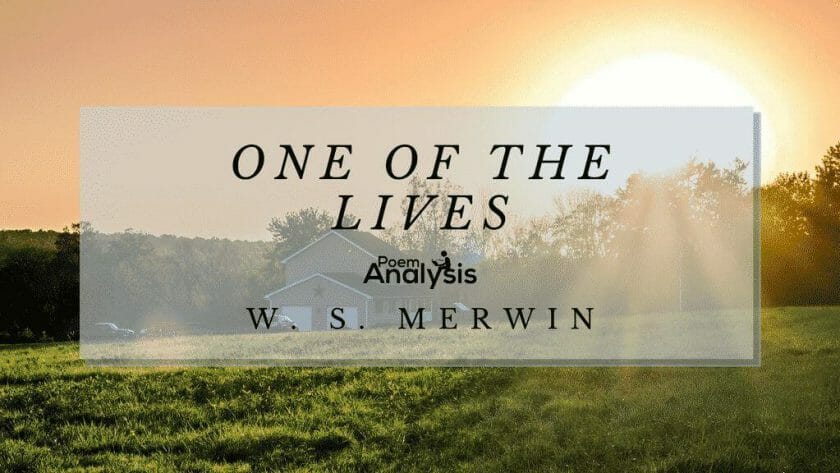 Explore One of the Lives

Summary of One of the Lives

‘One of the Lives’ by W. S. Merwin is a peaceful, contemplative poem in which the speaker discusses the steps that led him to his current state of being.

In the first part of the pome, the speaker goes through details, big and small, that brought him to where he is at that present moment. He’s on a bed, in a farmhouse, being treated for an undetermined wound. There, he depicts a scene of darkness and of light, just like life itself. The poet raises questions about free will and destiny in ‘One of the Lives’. Is this the only way his life could’ve turned out? Or are there other possibilities? Was he always going to end up there?

Themes in One of the Lives

In ‘One of the Lives,’ Merwin engages with themes that include life and destiny, as well as identity. The speaker is caught up in memory within the first part of this piece as he attempts to weave together the disparate parts of his life that brought him to where he is at that moment. His identity has been determined by the choices other people have made, the people he’s met, and the words he’s written down.

‘One of the Lives’ by W. S. Merwin is a twenty-nine line poem that is contained within one stanza of text. The lines are written in free verse, meaning that they do not follow a specific rhyme scheme or metrical pattern. But, this doesn’t mean they are completely without structure. Overall, the mood throughout the poem is peaceful and calm. This is achieved in part through the imagery, the use of a stream-of-consciousness style voice, and the way the lines run into one another.

Merwin makes use of several literary devices in ‘One of the Lives’. These include but are not limited to alliteration, enjambment, and imagery. The first of these, alliteration, is seen through the use and reuse of the same consonant sounds at the beginning of multiple words. For example, “parachuting” and “Provence” in line two and “fireplace” and “farmhouse” in line twenty. These examples, along with the others in the poem, help to create a feeling of rhythm and rhyme that is not provided by the overall structure.

Enjambment is one of the most important formal devices in ‘One of the Lives’. It is seen in the transition between every line of the poem. Every time the poet moves from one line to the next he does not resolve the phrase his speaker was in the middle of. This means that the reader is continually pushed forward to the next line, seeking out the conclusion to a thought or description. This is why the text seems to flow so easily.

Imagery is another important literary device. The poet uses imagery in or to paint a picture of the events a poem is concerned with. This might include what something looks like but also how it feels, what it smells like, and what it tastes like.

Analysis of One of the Lives

If I had not met the red-haired boy whose father

had broken a leg parachuting into Provence

of your choice or if the questions that day had been

put differently and if a young woman in Kittanning

In the first lines of ‘One of the Lives,’ the speaker begins by looking into his past and recalling some of the many things that led him down the path he’s on. Some of these are obviously important and others seem quite trivial but are equally important in the larger scheme of things. He remembers meeting a “red-haired boy” at the start of the poem that then it expands from there. The boy’s father was an influence on his own choices growing up, as was the story of the father’s friend’s elder brother who died “young quite different in peacetime”. These lines also include an allusion to Provence, France, and WWII.

At first, these items build on top of one another without a resolution to the “If” that started the poem. He adds on more, referencing the red-haired boy’s father’s friend’s brother’s children and his choice to write what he wrote on an examination form. “If,” he adds, the questions had been different that day, he would not have ended up where he is now.

I would not have travelled so far to lie shivering

with fever though I was wrapped in everything in the house

The speaker goes on, referencing a woman from “Kittanning,” a borough northeast of Pittsburgh who taught his father to drive, allowing him to get a job as a pastor and meet his mother. This leads to his birth and the start of everything else in his life. His parents were brought together by death and random circumstance and this has all led to him finding himself “on an iron cot / with [his] head by the fireplace of a stone farmhouse”. Finally, the speaker gives the reader something tangible to work with. The second part of the “if” clause is concluded.

It’s clear that this speaker has had a lot of time to think about his life and his choices. So much, that he’s been able to go into great detail about the small things that landed him in the not so great position that he’s in.

nor have watched the unctuous doctor hold up his needle

at the window in the rain light of October

thinking I knew where I was as I heard them fall

Through the final lines of the poem, the speaker brings in contrasting images. First, there is the “unctuous” (perhaps meaning smarmy or ingratiating) doctor who holds his needle at the ready. He is standing in front of a window that reveals to the speaker the “rain light of October,” something much more pleasant. This is a good example of juxtaposition.

Just as the speaker’s life led him to what feels like an unpleasant end, or at least an unpleasant time period, it also led him to peace. From his bed, he can see and hear the landscape. There is the valley, the river, and the “amber mountains”. He can, because of the red-haired boy and all the rest, lay in his bed and hear the plums falling from the trees. The peaceful final lines end with the speaker suggesting he isn’t actually quite sure where he is. He thinks he knows, but there is something dreamlike about the ending.

This poem, which touches on themes as wide-ranging as identity, family, and fate has a lot to share about the stages of life and how one follows or finds their path. Other similar poems include William Ernest Henley’s ‘Invictus’, ‘Fate’ by Ralph Waldo Emerson, ‘One Life’ by Paul Laurence Dunbar, ‘The Ballad of Reading Gaol’ by Oscar Wilde.