‘Broadway’ by Walt Whitman is a short, effective poem that speaks to the nature of contemporary life. It focuses in on one street in New York City. 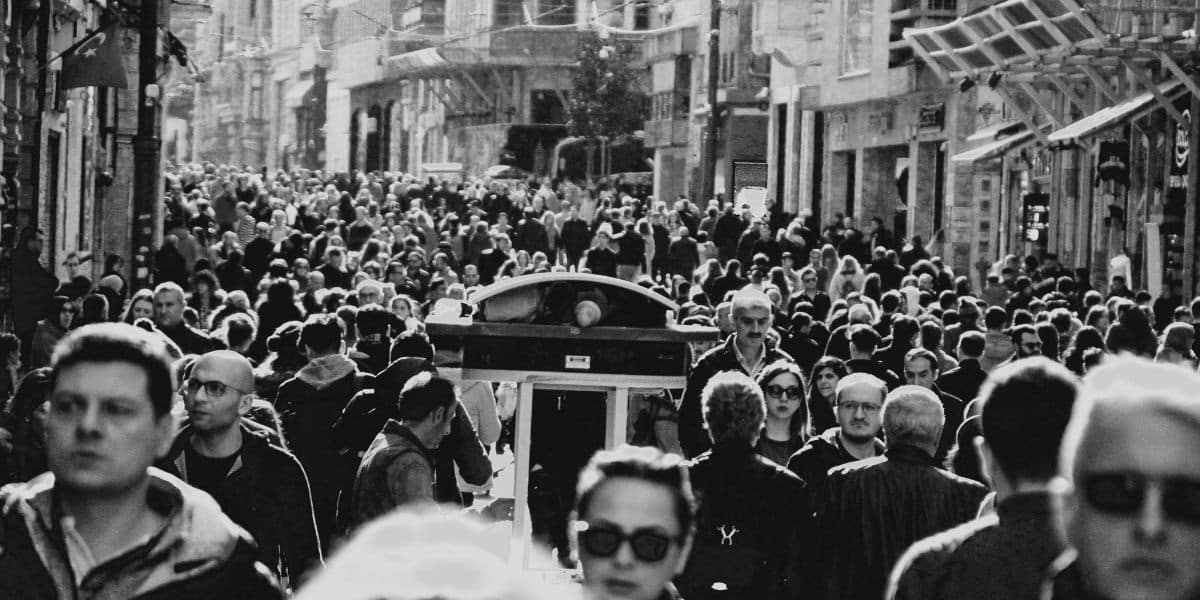 ‘Broadway‘ is fairly short, especially compared to some Walt Whitman poems. The lines themselves are short, as is the total number of lines. He speaks directly about his subject—Broadway, and the effect it has. The poem is filled with imagery, much of which should help readers imagine the street in the clearest of detail.

‘Broadway’ by Walt Whitman is a passionate poem about how the swaths of humanity walk on Broadway, in New York, every day.

The speaker uses the short lines of this poem to express his appreciation for the men and women swarming down the street. He believes that all of the human experience exists there and that with some observational skills, one can see it all. There are sorrows and joys, winnings, and losses. If only, he adds, the street itself could talk, there would be so much to share.

‘Broadway’ by Walt Whitman is a fourteen-line poem that is contained within a single stanza of text. The lines are written in free verse. This means that they do not follow a specific rhyme scheme or metrical pattern.

What hurrying human tides, or day or night!

What whirls of evil, bliss and sorrow stem, thee!

What curious questioning glances—glints of love!

The first lines of this poem begin with the word “What.” This is an example of anaphora. The technique is seen again at the end of the poem (using the word “Thou”).

The speaker is discussing “Broadway,” a busy street in New York City. Without the title, it would be near impossible to understand where Whitman was considering in these fourteen lines. But, with this context, readers can easily imagine the street and its “human tides… day or night.”

The street is filled with all of the human experience, from the highs to the lows. The poet uses water imagery in these lines, suggesting that humanity rushes through the street, filled with passion and sorrow, winnings and losses.

The speaker is inspired by the “tides” of humanity that one can see there. There are endless experiences and people to explore.

(Could but thy flagstones, curbs, facades tell their inimitable

In the next lines, the speaker uses accumulation to list out some of the emotions being experienced on this street. There is so much history there. The speaker pines over the fact that the street itself can’t tell its own stories. The “flagstones, curbs, facades” must have seen a great deal.

Thou of the endless sliding, mincing, shuffling feet!

In the final lines of the poem, the speaker says that the street, which he addresses as “Thou” is a world within itself. There, it is filled with the shuffling feet of the passes and “teeming, mocking life.” When one goes to Broadway and pays attention to the people passing by, there is a “show and a lesson.” It’s entertaining, but as one observes the movements of various types of people, there is a great deal to be learned as well.

What is the tone of ‘Broadway?’

The tone is formal and passionate. Throughout, the poet uses complex, passionate words giving the poem a spirited feeling. This can be seen through the poet’s use of exclamation points. These appear numerous times throughout the piece.

What are the themes at work in ‘Broadway?’

The themes at work in this poem include contemporary life. The speaker uses one single street in New York as a representation of all of humanity. He feels as though all human experience has passed along the flagstones of Broadway.

What is the purpose of ‘Broadway?’

The purpose is to express how filled with life New York is and how particularly interesting this one street is. If one takes the time to pay attention to the men and women walking on the street, they could learn a great deal.

Who is the speaker of ‘Broadway?’

The speaker is a third-person narrator. There is no specific information about who they are, but it’s clear they have a passion for the subject matter.

Readers who enjoyed this piece should also consider reading some other Walt Whitman poems. For example: