‘The Listeners’ by Walter de la Mare describes the actions of a Traveller who knocks at the door of a seemingly deserted home at night.

‘The Listeners’ was published in 1912 in de la Mare’s second collection. It is one of his most popular poems and touches on many of the themes and content that the poet is remembered for. He was fond of writing ghost stories, many of which are seen in Eight Tales as well as On the Edge and The Wind Blows Over. 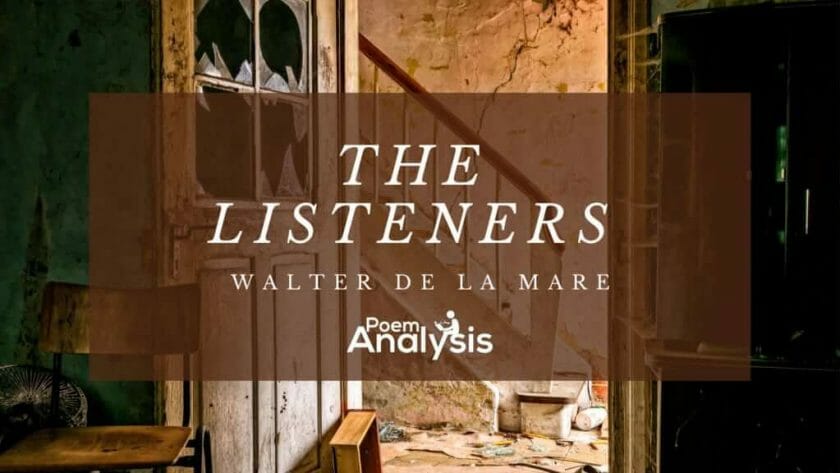 ‘The Listeners’ by Walter de la Mare describes the actions of a Traveller who knocks on at the door of a seemingly deserted home at night.

The poem begins with the speaker designing the Traveller and his horse. They are at the door of a house on which the Traveller is knocking. He is expecting to be greeted by someone, but no one answers his calls. The narrative moves inside the house where a certain presence resides. There are “phantoms” within the empty building. They “listen” well to the Traveller.

The Traveller can, to some extent, sense them there. He calls out a number of strange phrases that add to the mystery of the poem, and then finally leaves without an answer.

There are several interesting themes in ‘The Listeners’. These include the unknown and the supernatural as well as isolation and solitude. This mysterious poem touches on all these themes while more broadly speaking on the strangeness of the world and humankind’s inability to fully understand it. The poem itself is unknowable, keeping the reader far from the real identity of the listeners or what they mean. De la Mare creates a creepy landscape every element of which is seemingly untouched but also deeply strange. The traveler is forced to navigate this world on his own.

‘The Listeners’ by Walter de la Mare is a thirty-six line poem which is contained within one block of text. The piece follows a consistent pattern of rhyme in the scheme of, abcbdefe, and so on, changing end sounds as the poet saw fit. De la Mare chose to create rhyming pairs that are separated by un-rhyming lines. This allows the poem to maintain a certain amount of unity without falling into sing-song like pattern. Considering that the tone is melancholy throughout, this was a useful choice.

In regards to the rhythm chosen by de la Mare, it is anapestic in nature. This means that there are two unstressed syllables followed by a stressed syllable. It creates a feeling of anxiety in a piece that adds an additional layer to the overwhelming theme of loneliness.

Throughout ‘The Listeners’ Walter de la Mare uses several different literary devices. These include but are not limited to enjambment, anaphora, and imagery. The latter is one of the most important devices that’s used in the poem. it can be seen throughout as the poet describes the landscape and the traveler’s experience.

Analysis of The Listeners

In the first stanza of this piece the speaker, who does not play a physical role in this narrative, reports the speech of a “Traveller.” Rather than acting as a character in this story a speaker is a third person, semi-omniscient narrator. He is able to look down on the action and report it back to the reader.

The Traveler is knocking on a door at night. Space is said to be lit by “moonli[ght]” and filled with silence. These few describing phrases paint an immediate picture of the scene. A reader will be able to imagine the door, the sky, and the sound of the “horse” as it “champed the grasses.” This sound would be deafening in the silence.

The reader should feel the tense expectations of the Traveler as he waits to see if someone will open the door. The noise of the horse’s hooves on the ground is emphasized by the fact that they are standing on “the forest’s ferny floor.”

The environment they are in is covered in plants. This leads a reader to the supposition that the Travellers is not somewhere very industrialized. The landscape is primarily natural. As if hoping to prove this is the case, a bird is described as flying out of the “turret.”

So far the reader has only gotten a few details about the structure on which the Traveller is knocking. It is out in the woods and it has a “turret” or tower. This leads one to believe that it is a large building or even a castle-like home. There is an overwhelming sense of mystery in these opening lines. This comes partially from the fact that the poem begins in medias res, or in the middle of the scene. There has been no introduction or explanation for what is occurring.

The Traveller decides that he will “smote upon the door again.” In this context “smote” means to strike with force. He is not being tentative about his desire to gain entry into the building. Again the Traveller calls out,

‘Is there anybody there?’

This proves that although the Traveller might be confident enough to knock hard on the door, he is still unsure about whether or not there is actually anyone home.

In the second set of lines, the speaker describes how there is no one there to greet the Traveller. He waits, but no one “descend[s].” In a line that proves that the abode is somewhere in the woods, the speaker states that,

No head from the leaf-fringed sill

The window that the traveler would expect the resident of the home to appear in, remains empty. There is still no sign that anyone is present inside the building or willing to let him in. A reader is also given the additional detail of the Traveller’s eyes being “grey.” They portray his emotions well. He is now “perplexed” by his situation. Perhaps he had some reason to expect that there would be someone there. The Traveller remains “still” standing where he is.

He is still waiting, expectantly. But there is nothing to be heard. The only others present are the,

That dwelt in the lone house then

These lines make clear that the house is in fact empty. There is no one inside ignoring the Traveller’s knocking and shouting. This section also emphasizes the solitary nature of the moment. The traveler is completely alone, aside from his horse. No one can even hear his voice.

At approximately the halfway point of this piece the speaker returns to the image of the “phantoms” that he sees as being the only inhabitants of the house. They move through the “empty hall” and take to the stairs as any normal residents would. These ghostly images do not make an impact on their world. They are unable to respond to the “Traveller’s call,” although they can hear it. The air around them is “stirred and shaken” by the sounds he makes.

The narrative returns to the heart of the traveler. He suddenly feels strange, as if he knows there are “phantoms” inside who are listening to his words. It is the quiet of the house that “answer[s] his cry.” This fact inspires him to try again.

The speaker “smote on the door” once more. This time with more force. He makes his knocks “Louder.” After, he lifts his head up to the window that was mentioned in a previous line and calls out. The words he speaks increase the mystery of the entire narrative. He asks that the presence he feels inside the house “Tell them I came.” As one would expect there is no answer. He follows this up another phrase, “That I kept my word.”

There is no revelatory statement following up these odd words to explain the situation. This is both a negative and a positive. While one’s personal curiosity will not be sated, one is able to craft any narrative they want on top of de la Mare’s.

[…] the shadowiness of the still house

The sounds are reaching no one with the capacity to respond to them. They dissolve into the shadows.

In the final four lines, the speaker returns to the “phantom” or “phantoms” who are listening. By the time the Traveller leaves the front of the house, there is only one “man left awake.” This single listener took note of the Traveller’s “foot upon the stirrup” of his saddle. The phantom heard the passing of the silence as the man moved away until there was nothing.

Readers of this piece are left to wonder what exactly happened in the last thirty-six lines. There are a number of different interpretation which could be posed. Perhaps those who the speaker came to see have passed on and are now the “phantoms” watching silently inside.

Those the Traveller was seeking out could’ve moved on to another location, leaving behind remnants of themselves or allowing other entities to take up residence there.

Beyond these literal interpretations is a general theme of loneliness. The Traveller is in a solitary state throughout the piece and the forces inside the house represent loneliness in their very being.

In the same vein as ‘The Listeners’ are other poems such as ‘Astrophobos’ by H.P. Lovecraft, ‘The Black Heralds‘ by César Vallejo ‘The Vampire’ by Conrad Aiken, and ‘The Witch’ by Mary Elizabeth Coleridge. Each of these poems deals with the unknown and the supernatural in a different way. They all raise questions for the reader that go unanswered by the end of the poem while also dealing with imagery that is certainly unnerving.