The Messages by Wilfid Wilson Gibson

The Messages by Wilfrid Wilson Gibson shows the barbarity of war, with the soldier who leads the poem slowly going insane. He experiences so much death that he loses his grasp of reality. 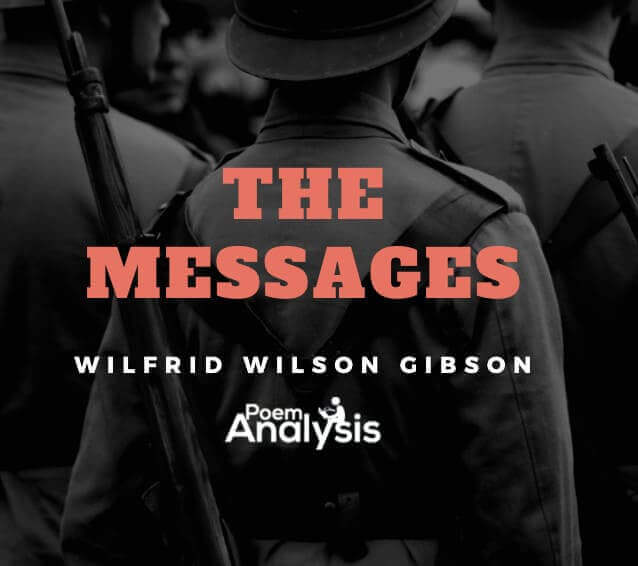 Wilfrid Wilson Gibson explores the horrors of war, with the voice of the poem trying to recount the messages of three dying men he came across. He repeats the story over and over, never going over the actual messages. The poem at once paints a mind destroyed by witnessing the horrors of war, and also presents the monotonous narrative of war – with pain begetting pain.

The structure within Gibson’s The Messages is of key importance. Due to the repeating three line structure, the poet is able to suggest a sense of insanity, the similar structure compounding this fact. There are five stanzas within the poem, with one stanza being mirrored exactly three times – displaying the common insanity of those impacted by war. It is repetitive, a gruelling narrative on the horrors of war.

As mentioned above, one of the key poetic techniques that Gibson employs is the use of repetition. This continual repetition throughout allows the poem to suggest a sense of insanity, with the voice of the poem slipping deeper and deeper into madness. The repeating structure allows this insinuation to occur – with insanity and repeated actions going hand in hand.

The poem begins with speech, the voice of the poem recounting an event of war after it has taken place. The poetic voice situates itself at the forefront of the poem, the personal pronoun ‘I’ being used as the first word of the poem. In doing this, the poem takes on a personal style, with the account of war being touching and incredibly personal to the reader. Yet, Gibson believes that these events, in which men die and are forgotten, are more common than one may think – the repeating narrative suggesting this is a story that happens over and over again.

The first sentence being framed in the negative, ‘I cannot quite remember’, instantly focuses The Messages on the damaged mental state of the speaker. Indeed, he ‘cannot quite remember’ what happened, the shock and intensity of the trenches blurring his memory. The negative beginning of the poem frames the poem as a whole, Gibson’s view of war and the horrors that impact those who go through the experience clearly being something he does not agree with.

Gibson’s speaker suggests that there are ‘five’ who simply ‘dropt dead beside me’, the horror of five people dying right before the speaker’s eyes being the poem’s first insight into the brutality of war. The location, ‘in the trench’, frames the poem as a quintessential war poem, Gibson drawing upon the geographical semantics of warfare.

The hyphen after ‘Trench —‘ furthers this idea, with the word being emphasised. The hyphen could also be a moment of shock in the poem, the speaker reacting to the sudden death of the ‘five’ fellow soldiers.

Out of the ‘five’ dead, only ‘three whispered their dying messages’. 2 soldiers are instantly lost from the narrative, their lives being extinguished and forgotten. Gibson could be commenting on the expenditure of human life that countries are prone to in warfare, men becoming just numbers to blindly send into battle. The focus on ‘whisper’ suggests the weakness of the remaining three soldiers, all being very close to death. The fact all three of them speak at the same time to him adds to the sense of chaos and confusion, the speaker unable to actively remember or engage with any of the men’s final words.

The use of ellipsis on the final line of stanza one compounds a sense of tragedy, the loss of five human lives with not a single last word documented being paused upon in a moment of poetic reflection. Gibson is shocked at the horrors of war, with The Messages trying to recapture a lost sense of humanity.

Back from the trenches, more dead than alive,
Stone-deaf and dazed, and with a broken knee,
He hobbled slowly, muttering vacantly:

The man returns ‘back from the trenches’, his condition being ‘more dead than alive’. The grammatical isolation of this phrase, with a comma caesura preceding and an end stop finishing the phrase emphasises the words. The depleted condition of the man, seemingly ‘more dead than alive’ is a grave picture of soldiers during war. The scene is lifeless, with the tragedy of the poetry being the focus here.

The alliteration of ‘d’ across ‘dead.. deaf and dazed’ compounds the sense of shock, the almost stuttering rhythm reflecting the solider’s bewildered appearance. He ‘hobbled slowly’ into camp, his ‘broken knee’ being an afterthought. Indeed, flitting over the pain of the knee shows the true horrors of war, with bodily destruction being the least of Gibson’s observations here.

Madness has already seemingly set in, the man who returns from the trenches ‘muttering vacantly’ to himself. The idea of ‘vacantly’ suggests a mind deserted, with the soldier suffering extreme mental anguish due to the death of the five soldiers he has seen.

This stanza begins to further reveal the insanity of the soldier, with the poetic voice now repeating the first stanza over again. There is no difference between this and the first stanza, with the repetition compounding the madness of the solider. Gibson suggests that war provokes people to insanity.

“Their friends are waiting, wondering how they thrive—
Waiting a word in silence patiently….
But what they said, or who their friends may be

Far away from the horrors of war, the ‘friends’ of those now dead are ‘waiting, wondering how they thrive—‘, the tragedy of the ignorant friends, living in a happy bliss in which they do not yet know their friend is dead, is emphasised by the use of hyphen, the long metrical pause shifting the tone of the poem further towards melancholia.

The use of ellipsis again slows the rhythm, both reflecting the insanity of the soldier, and the tragedy of the poem.

The final stanza repeats the first and third. The complete repetition of stanza extends the image of insanity, war reducing the solider into a babbling mess that is set on repeating the same story over and over. Gibson’s The Messages displays a heartbreaking portrayal of a soldier mentally destroyed by witnessing the horrors of war, the corrupting insanity leading to a haunting, repeating narrative.