Willa Cather, whose full birth name was Wilella Sibert Cather, was born in Winchester, Virginia in December of 1873. Her birthplace, Black Creek Valley, was situated on land which had been in her family for six generations. Her father, Charles Fectigue Cather was the owner of the land, and her mother, Mary Virginia Boak was a school teacher. Soon after Cather was born the family moved to Willow Shade. This was the name given to the 130-acre property and home bequeathed to the family by her father’s parents.

In 1883, the family moved again when Cather was nine, this time to Nebraska. 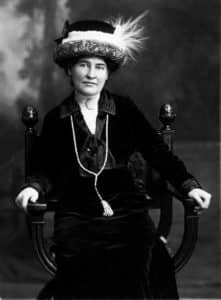 This choice was made in reaction to the numerous outbreaks of tuberculosis in Virginia. A life of farming was new for Charles Cather and he only managed to work the farm for eighteen months before the family moved into town. This gave the Cather children their first taste of structured education.

The town in which the family was living was known for the vast array of immigrants from Europe. These included workers from Sweden, Russia, and German. This period of Cather’s life was extremely informative for the young girl who would take the inspiration she gained from the landscape and those who lived in and around it, into her future works.

Cather eventually went on to attend the University of Nebraska where she began writing. She had entered university with the intention of studying science and becoming a doctor, this soon changed. She became interested in journalism, and while enrolled published in the Nebraska State Journal. Cather would go on to contribute frequently to this publication as well as serving as the managing editor of The Hesperian, the student newspaper.  In 1894 she graduated with a B.A. in English.

After graduation, Cather moved to Pittsburgh and got a job writing for Home Monthly, a publication that was concerned with domestic matters. She soon became the copy editor, as well as the editor of music and dance for the Pittsburgh Leader. It was also during this time that she began contributing poems and short stories to The Library.

Cather chose to change career paths once more and took up teaching in 1901. She taught in all subjects, from algebra to English composition. It was two years later that her first book of verse, April Twilights, was published. It was followed two years later by a collection of short fiction titled, The Troll Garden. This work contained some of her best-known pieces, including: “A Wagner Matinee” and “Paul’s Case.”

Cather’s writing career was flourishing, and in 1906 she was invited to take a job in New York City on the editing staff of McClure’s Magazine. This publication is now considered the first to publish real investigative journalism, also known then as “muckraking.” She helped contribute to an increase in the newspaper’s circulation, which had fallen, and would fall again in the late ’20s. It was in 1912 that Cather changed her path again and took up writing full-time.

Her first novel, Alexander’s Bridge, was published that same year in serial form. It was a story of cosmopolitan life influenced by her time in Pittsburgh and New York City. Critics received the work favorably and it was praised by publications such as The New York Times and The Atlantic. In 1913, only one year later, she released the first installation in her Prairie Trilogy titled: O Pioneers! This work is now among the most widely read of Cather’s fiction and would represent a commitment to detailing prairie life that she was so familiar with. O Pioneers! was also received well, garnering praise for its depiction of common people.

The other two works in the Prairie series were The Song of the Lark, published two years later in 1915, and what is perhaps her best-known and most finely crafted novel, My Ántonia, in 1918. Cather won Pulitzer Prize four years later for the volume, One of Ours. It was followed by Death Comes for the Archbishop, a work which was included in the Modern Library of 100 Best novels of the twentieth century.

It was in the 1930s that some of the desire for her work dried up. She started developing a reputation as being too romantic and nostalgic, as well as being seen as being unable to contend with modernity. Her final novel was published in 1940. Despite this change from critics, she was elected to the American Academy of Arts and Sciences in 1943 and received a gold medal for fiction from the National Institute of Arts and Letters a year later.

In 1947 Willa Cather died of a cerebral hemorrhage. She was seventy-three years old. Cather is buried in the Old Burying Ground in Jaffrey, New Hampshire.