William Barnes was born in Bagber, Dorset in February of 1801. He was part of a farming family and finished his education before he was fifteen years old. Although he had finished his formal education, he engaged with classic literature on a regular basis alongside a local clergyman. It was at this time, around 1818, that Barnes began working as a solicitor’s clerk. This temporary career ended in 1823 and he moved to Mere in Wiltshire shortly afterward. 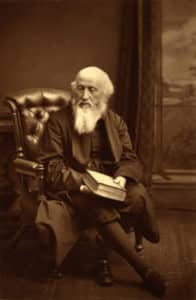 The year 1823 also saw Barnes open up a school and begin to write poetry. He was immediately interested in writing in the style for which he would come to be known. Barnes composed his works in the Dorset dialect with which he was so familiar. Barnes art practice did not focus solely on poetry though. He was also engaged with the learning of languages such as Greek and Latin, playing musical instruments, and wood-engraving. Four years after opening his school he married Julia Miles, who was the daughter of a local exciseman, or a tax collector.

It was in 1833 that Barnes’ first dialectic poems were published. They appeared in the Dorset Country Chronicle. The poems were later published in Poems of Rural Life in Dorset Dialect in 1844.

In 1835, after a few years of marriage, the couple moved back into the country. It was here that he opened a school on South Street, near to where the poet Thomas Hardy was working as an architect. Throughout his early career, Hardy would speak with Barnes, seeking out his advice on his juvenile works. Barnes also came to know the writers Alfred Lord Tennyson and Gerard Manley Hopkins.

In 1847, Barnes was ordained into the Church of England. He also received a Bachelor of Divinity degree from St John’s College, Cambridge four years later. While working in the church he served at Whitcombe Church in Dorset in the late 1840s and early 50s. In 1862 he became rector of St Peter’s Church. This was a position he would hold until his death.

In the late 1850s Barnes’ second collection, Hwomely Rhymes was published. It was followed by a third collection five years later. Barnes’ writing was not confined to poetry though, he also published philological works, or works concerning the study of literary texts as written records. These volumes included Philological Grammar and Tiw, or a View of Roots.

William Barnes died in October of 1886 at eighty-five years old.