W illiam Blake was unrecognized during his lifetime but since his death he has become known as one of the greatest artistic and literary geniuses of the 18th and 19th centuries.

‘The Tyger’ was published in 1794 in Songs of Experience. It is widely anthologized alongside ‘The Lamb’. The poem questions the cruel elements of God’s creation, the tiger being the main example. Throughout, the child tries to reconcile the tiger with the kinder, softer elements to be found in the world.

‘The Lamb’ is the companion piece to Blake’s ‘The Tyger’. It uses the lamb as an image of God’s goodness and his overarching will. A child is addressing the title animal throughout the poem. They speak to the creature and takes note of its soft wool and the simple noises it makes.

‘A Poison Tree’ was also published in 1794 in William Blake’s Songs of Experience. Blake’s speaker considers what anger is, and two different ways of confronting it. One might move past it by speaking about its cause. Alternatively, the anger takes root through the image of a tree that unfortunately bears poisoned apples.

‘The Sick Rose’ should be read with an eye on the way that the extended metaphor at the heart of the poem works. The speaker compares the rose, a symbol of nature, beauty, and fragility to a woman’s innocence or chastity.  The value of a relationship with a woman was defined by whether or not that woman has had sex. When the rose is ‘sick’ it has lost its purity or its virginity.

‘London’ was published in Songs of Experience in 1794. It describes the difficulties of London life while the speaker moves through the city. He travels to the River Thames and takes note of the solemn and resigned faces of his fellow Londoners. There is a true pain hearts of men, women, and children.

William Blake was born in Soho, London, England in November of 1757. He was the third of seven children (two of whom died in infancy) born to his parents, James and Catherine. Blake only attended school for a few years, managing to learn to read and write, before he left at the age of ten. He was educated by his mother for the rest of his childhood. It was during this same period of time that Blake claimed to have had his first vision (a tree full of angels), an experience which would become a reoccurring theme in his life.

As he aged, he began to study engraving and develop a love for Gothic art. These elements would prove influential in his later paintings and drawings. He was enrolled by his parents in drawing classes at Pars’s drawing school in the Strand. In this institution, he was able to freely read any subject he chose as well as explore his poetry. His work from this period showed the influence of poets such as Edmund Spenser as well as elements of scripture and the Psalms.

In 1772, Blake began an apprenticeship with an engraver. He remained in these circumstances for the duration of the term, a total of seven years. At one point the young artist was sent to Westminster Abbey. He would later tell of experiencing a number of visions there. These included: Christ and his Apostles as well as chanting, religious processions.

Blake’s Poetical Sketches was published in 1783. This was a collection he had been working on for over 14 years. Two years later, Blake co-opened a print shop and began working with the publisher Joseph Johnson, who was seen as a radical. This same year Blake wrote the began the manuscript, An Island on the Moon, a work which was never completed.

In the late 1890s, Blake published a number of his “prophetic” books. These works were illuminated in his characteristic style and contained poetic and narrative texts. Some of these volumes include Visions of the Daughters of Albion, The First Book of Urizen, and the continental prophecies: America a Prophecy, Europe a Prophecy, and The Song of Los.

In 1819, Blake began a series of sketches which were referred to as “visionary heads.” These works depicted historical and imaginary figures who Blake claimed came and sat for him. By the mid-1800s he had completed more than 100 individual works. They included King Solomon, the magician Merlin, Owen Glendower, and William Wallace.

The mid-1800s also saw Blake create engravings for an illustrated edition of the Book of Job and Dante’s Inferno.

In 1782, Blake married Catherine Sophia Boucher. He taught the young woman how to read, write, and draw. She remained his steadfast supporter throughout his life.

In the later years of the 18th century, Blake suffered a great trauma when his brother, Robert, died from tuberculosis at only 24. The poet claimed to have seen his brother’s spirit rise from his body and pass through the ceiling. This experience was deeply influential, especially after Robert reappeared to Blake and instructed him in a new method of printing his works. A process that would come to be called “illuminated printing.” This way of working would be utilized in his best-known collection Songs of Innocence and Experience.

In the early 1800s, Blake moved to work alongside William Hayley. Their relationship did not last long— souring around the same time that Blake ran into legal trouble. In an incident involving a solider on his property, Blake was charged with assault and sedition. He was forced to take on a lawyer and was luckily acquitted in 1804.

Soon after his troubles, Blake and Catherine moved back to London. It was here he began to write and illustrate Jerusalem. This work would take a number of years to complete, spanning from 1804 to 1820 and beyond as later edited versions were released.

It was also during this period that Blake began showing his work as exhibitions. The pieces were met with either silence or negative criticism. At one point he was even referred to as “an unfortunate lunatic.” The reviews hit Blake hard, impacting his mental health and keeping him from showing any further illustrative works

Blake’s death came after repeating occurrences of an undiagnosed illness. He died in August of 1827 leaving behind a number of unfinished collections. These included illustrations for Bunyan’s Pilgrim’s Progresses, Dante’s Inferno, as well as an illustrated manuscript of the Book of Genesis.

William Blake was notably influenced by writers such as Dante Alighieri, William Shakespeare, and John Milton. Since his death, he has inspired in turn countless other poets throughout the centuries.

Explore poetry by William Blake below, analyzed by the team at Poem Analysis. 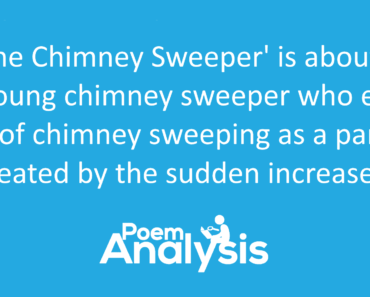