The Angel by William Blake

William Blake’s ‘The Angel,’ told through the frame of an angel that appears in a dream to the narrator throughout the course of their life. This poem was published in Blake’s collection “Songs of Experience” in 1794. 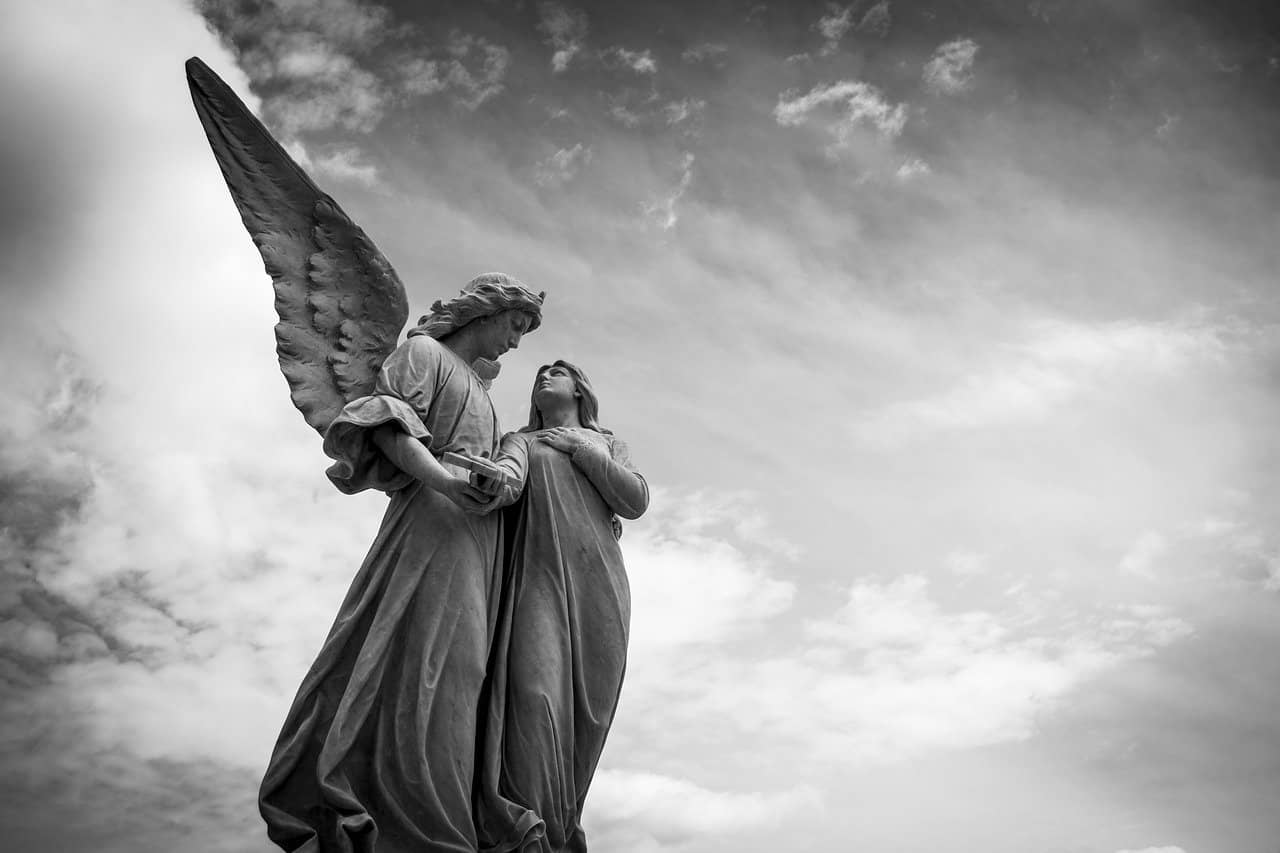 ‘The Angel’ speaks on the fascinating concept of angels. The idea of the angel is common within the Abrahamic religions: Islam, Christianity, Judaism, and the Bahá’í—as well as being mentioned in Sikh and Zoroastrian texts. The idea of having a guardian angel is one that is thousands of years old, and in each form of the phrase, there are core similarities—that an angel is a spiritual, otherworldly being charged with the benevolent task of fulfilling the will of the divine on Earth.

‘The Angel’ by William Blake presents a dream in which a speaker as a “maiden Queen” was guarded by an angel. He left the speaker in distress and reappeared when she grew old.

Blake’s poem describes a dream that the speaker dreamt. In the dream, she was a maiden Queen and her guardian angel protected her all day long. Later he took off on his wings. It made the speaker so sad that the incident hardened her nerves. She matured and grew older. So, she stopped thinking about the mild angel. When the angel reappeared it was too late as “the time of youth” had already fled. She was too old to be guided by an angel.

Indeed, the meaning of ‘The Angel’ is broad enough that it could be used to describe a man off to war, believing themselves to be fighting for a noble and true cause, and hardening their own defenses to protect themselves from the harsh reality of war, or indeed, revolution. There is a definite sense of sadness to this poem and a strong sense of longing, even after the angel departs for the final time, a fleeting symbol of something that might have been.

‘The Angel’ is a poem that strongly contrasts elements of innocence and corruption. In a way, we all have our own angels, in the form of things we believed as children that we no longer do. We all had a different way of reacting to the world as children than we do as adults (and if one doesn’t, it would be better to work on that).

The angel declining to comfort the narrator’s false fears is reminiscent of when we as children believe or say something illogical, and are rebuked by some element from “the real world;” because Santa, as it turns out is not real, nor is there an Easter Bunny, and unfortunately, it is our parents that sneak money beneath our pillows in return for small teeth.

These are, of course, extremely simplistic examples, but they still depict noticeable similarities to ‘The Angel‘. Each belief is slowly crumbled away, to be replaced by an element of reality that hardens our resolve, and makes us believe less in the rest—it’s one more spear and one more shield to our arsenal of logic, stubbornness, and adulthood.

I dreamt a dream!  What can it mean?

And that I was a maiden Queen

Guarded by an Angel mild:

What can it mean? In ‘The Angel,’ Blake begins a journey into the subconscious mind, the one that makes readers dream all kinds of odd and unusual things. In this one, the dream is of an innocent queen, protected by a guardian angel. The inclusion of “What can it mean?” is interesting; it enforces the image of a subconscious idea that the narrator itself is unaware of. What does it mean to be visited in one’s sleep by an angel? It’s a good question.

The word “maiden” is another interesting addition because it is a word that typically refers to an unmarried girl, particularly one who is a virgin. At the time this poem was written—the volume it appears in was first published in 1794—the theme of innocence would have strongly correlated with this word. The narrator dreamed she was in a state of perfect innocence, and that innocence was guarded by an angel that would not be deceived or beguiled by stupidity or sorrow but would defend the innocence of its “Queen”.

And I wept both night and day,

And he wiped my tears away;

And I wept both day and night,

And hid from him my heart’s delight.

And like any good angel, the narrator’s guardian was there for him, day and night, night and day. Whenever there was any kind of weeping, the angel would be there. “Weeping,” of course, does not have to mean literally crying. As everyone reading this poem ‘The Angel’ can attest to, growing up is a long, difficult journey, filled with its fair share of struggle. And when experiencing hardship, what can compare to the simple joy of being held by another being, and told sincerely that we are going to be fine?

Unfortunately, this comes back to hurt the dreamer, who begins to hide her happiness from the angel. She wept day and night, yes, but this was regardless of whether or not they actually felt sad or hurt. True tears don’t fall from happy hearts, but who could say no to the comforts of an angel? So the dreamer cries, whenever they can, wherever they can, for the simple joy of having their angel nearby.

So he took his wings, and fled;

Then the morn blushed rosy red.

I dried my tears, and armed my fears

With ten thousand shields and spears.

The angel, however, is not fooled, and understands that he is being used for something beyond his true purpose—so he leaves. This marks the final transition of the dreamer into “growing up;” the morning rose, a new day and the dreamer is alone now. There is no longer any need to cry over falsehoods, but there are still reasons to cry, still fears out there in the world—so without an angel nearby, the dreamer arms her fears, and is armed as well.

There’s a popular saying—one that borders on cliché, really—that states that the best way to overcome a fear is to embrace it. If a person is afraid of heights, this saying would argue, then maybe it’s time to try skydiving. If we are afraid of the dark, maybe cut back on our electricity bill a little. It is evident, however, that no one has told the dreamer this saying, because their new response is to fight the world.

Whenever anything comes up that they don’t like, they choose to fight it, rather than cry about it. A person who chooses to fight the world, and takes up arms against it, is simply a poetic way of describing a cynic—and “ten thousand shields and spears” makes one a formidable cynic indeed.

I was armed, he came in vain;

For the time of youth was fled,

And grey hairs were on my head.

The angel, to his credit, returns to the dreamer, but it’s too late—she is grown up, chosen her approach to life, and it is too late to change. The “maiden Queen” has become an independent ruler and is armed against its childhood friend. The fact that the dreamer is entering old enough age to be finding grey hairs suggests that a lot of time has passed, despite the use of the word “soon”—this is, after all, a dream, where time is relative.

It is important to note that these poems align with the beginning of the French Revolution, which Blake, an Englishman, supported. He had strongly hoped that it would bring about important change, a hope that quickly shifted to despair at the start of The Reign of Terror, a violent outbreak of political rivalry that was responsible for the deaths of over thirty thousand people. The occurrence of these events, followed by his own reported disillusionment with contemporary social practices—including the Enlightenment, institutionalized religion, and marital tradition—gave William Blake’s poems a deep, introspective, and often dark meaning to reflect his own state of being for the time.

Did William Blake believe in angels?

When Blake was around nine years old, he had a vision of angels. He saw he was walking through the countryside and suddenly encountered a tree filled with angels. So, from early childhood, he had a fascination with these extraordinary creatures.

What type of poem is ‘The Angel’ by William Blake?

Blake’s ‘The Angel’ is a lyric poem that consists of four rhyming quatrains. Each quatrain contains a set of two rhyming couplets. Thus the rhyme scheme of the poem is AABB.

What are the main literary devices used in ‘The Angel’?

What does “Witless woe” mean?

The phrase “Witless woe” contains a personal metaphor. Here, Blake compares the feeling “woe” to a “Witless” or foolish person. Like a foolish person, the speaker was crying over even if she was guarded by an angel.

What does an angel symbolize?

An angel symbolizes innocence, purity, and protection. In Christianity, angels are depicted as benevolent intermediaries between God and humankind.

The following poems are similar to the themes present in William Blake’s poem ‘The Angel’.

You can also read about these beautiful dream poems and the best-loved poems of William Blake.

Andrew joined the team back in November 2015 and has a passion for poetry. He has an Honours in the Bachelor of Arts, consisting of a Major in Communication, Culture and Information Technology, a Major in Professional Writing and a Minor in Historical Studies.
Subscribe
10 Comments
Newest
Oldest Most Voted
Inline Feedbacks
View all comments