The Night is ostensibly about heaven and the angels. It is laden with references to nature and the natural world as you would expect from a romantic era poem. The poem references several animals but primarily uses a lion to represent the spirit of protection. There are several religious references throughout the poem that lead me to believe it is describing heaven. The most telling of these is in the last stanza where the reader is introduced to the lamb which is often used in the bible to represent Jesus Christ.

The poem is divided into 6 equal lenghted stanzas all containing eight lines. The metre is uneven with the amount of syllables and stresses fluctuating throughout the poem. There is a consistent rhyming pattern throughout the poem (ABABCCDD) although some of the rhymes are only partial. The poem is quite joyous in its nature and draws upon nature frequently, which is somewhat a calling card of the poetry of Blake.

The sun descending in the west,
The evening star does shine;
The birds are silent in their nest,
And I must seek for mine.
The moon, like a flower,
In heaven’s high bower,
With silent delight
Sits and smiles on the night.

This first stanza begins by describing a sunset and then talks of the evening Star. This is another name for the planet Venus. The narrator regales us with their description of the scenery which is made to sound beautiful, almost enchanted. It is obviously a quiet night as the word silent is used twice in this first stanza. The moon is described as being like a flower and this metaphor is used as a way to emphasise its beauty. The moon is then personified as it is described as “smiling on the night” this helps bring the scene to life. Personifying the moon in this way makes it almost like a character in a play rather than a static object. However it isn’t a dynamic object. Everything about this stanza creates a feeling of serenity, from the repetition of the silence to the fact that the moon is described as “sitting” everything here is stationary.

Farewell, green fields and happy groves,
Where flocks have took delight.
Where lambs have nibbled, silent moves
The feet of angels bright;
Unseen they pour blessing,
And joy without ceasing,
On each bud and blossom,
And each sleeping bosom.

What I find particularly interesting about this stanza is the use of the word farewell in the first line. What is it that the narrator is saying goodbye to? And why? Could it be that the diminishing light has prompted the narrator into saying goodbye to the natural world? Once more we see some beautifully vivid descriptions. Even the groves are described as being “happy” another example of nature being personified. This device is taken to the next level though as the narrator calls on a comparison between nature and an angel! The use of the angel might be to help put across the idea of serenity. Once again we see the word silent used in this stanza as if to hammer home the point that the narrator is trying to make. Not the words used in these descriptions and the mental image they help to create, words like: joy, bright, blessing – these are all universally positive.

They look in every thoughtless nest,
Where birds are covered warm;
They visit caves of every beast,
To keep them all from harm.
If they see any weeping
That should have been sleeping,
They pour sleep on their head,
And sit down by their bed.

His stanza does not share the overarching positives that we have seen from the two that proceeded it. Right from the first line we see birds’ nests described as thoughtless. This is actually a pretty clever way to describe a next when you think about it. Often they do have a kind of haphazard appearance. The stanza continues to describe animals in the kingdom that seemingly need protection. The aforementioned angels then seem to provide this protection providing warmth where it is needed. It refers to the angels as pouring sleep on their head. Is this akin to the actions performed by the legendary Sandman? Although the legend of The Sandman wasn’t really written about until the early 19th century so this seems unlikely.

When wolves and tigers howl for prey,
They pitying stand and weep;
Seeking to drive their thirst away,
And keep them from the sheep.
But if they rush dreadful,
The angels, most heedful,
Receive each mild spirit,
New worlds to inherit.

Here we see the “dark side” of nature represented by carnivorous beasts. The opening four lines of this stanza then create an image of a stand-off of sorts between the tiger and wolves and the angels that are protecting the animals. It would appear that even though the hunting animals have negative intentions they are still held in regard by the angels who view their spirits as “mild” this is quite an unexpected turn as you wouldn’t associate that term with these type of animals. These beasts are taken to a new kingdom.

And there the lion’s ruddy eyes
Shall flow with tears of gold,
And pitying the tender cries,
And walking round the fold,
Saying, ‘Wrath, by His meekness,
And, by His health, sickness
Is driven away
From our immortal day.

I think in the first line of this stanza that the word ruddy is ascribed to the lions eyes to make the reader think of blood (ruddy is another word to describes someone with colourful red cheeks.) the lion is crying tears of gold. Is this to represent the regal nature of the beast? The lion is often referred to as the king of the jungle and gold is something that one would certainly associate with royalty. The end part of this stanza is a little confusing but I think the insinuation is that the lion in acting in a way considered to be meek that he is able to drive away sickness from the place. Note the use of the word “immortal” in the final line of this stanza. Is the place that is being described actually heaven? With the numerous references to angels it could well be the case.

‘And now beside thee, bleating lamb,
I can lie down and sleep;
Or think on Him who bore thy name,
Graze after thee and weep.
For, washed in life’s river,
My bright mane for ever
Shall shine like the gold
As I guard o’er the fold.’

William Blake was an 18th/19th century poet and painter. He is a prominent figure from the romantic age of poetry. He spent almost his entire life living in London. Many of Blake’s peers described him eccentric and even mad, although he is highly regarded by modern day scholars. One of the most interesting stories of Blake is that of his death. Apparently he began painting his wife on his deathbed and reportedly said “Stay Kate! Keep just as you are – I will draw your portrait – for you have ever been an angel to me.” When he finished this he laid down his tools, began singing hymns and eventually passed away. 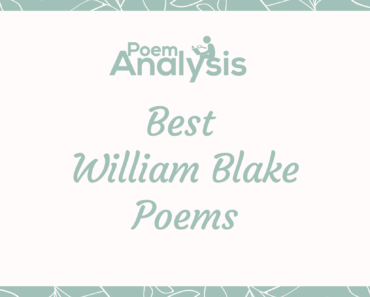 Lee-James, a.k.a. LJ, has been a Poem Analysis team member ever since Novemer 2015, providing critical analysis of poems from the past and present. Nowadays, he helps Will manage the team and the website.