The Fisherman by W.B. Yeats depicts the author’s conception of an ideal reader. W.B.Yeats imagines a simple, but wise, man as a reader. When he wrote this, he despised the middle class but, at the same time, he didn’t want to write for the upper classes either. Therefore, Yeats portrays his ideal reader in the figure of the fisherman. This ideal reader is pictured by the lyrical voice as a traditional Irish man, who represents a heroic figure. Consequently, The Fisherman creates the image of a perfect man and this image is embodied in the fisherman as a symbol.

The form of The Fisherman is really simple, as well as its rhyme and its language. The poem follows a structure of 3 stanzas and each one of them has its own rhyme scheme. This simple poetic form helps W. B. Yeats to illustrate the simplicity embodied in the ideal man he is portraying. Thus, the form of the poem reflects the meaning that Yeats is trying to achieve by using the figure of the fisherman. The writing acquires an oxymoronic form as the poem portrays this ideal man as “simple and wise”, which combines wisdom with simplicity, representing a man who lives in communion with nature but is also appreciative of art. The Fisherman would be a man who fits, perfectly, into the landscape of the country; a man who is in contact with his roots and with nature, but that knows how to appreciate high art.

Although I can see him still,

The freckled man who goes

To a grey place on a hill

At dawn to cast his flies,

It’s long since I began

To call up to the eyes

This wise and simple man.

All day I’d looked in the face

What I had hoped ‘twould be

To write for my own race

In this first stanza, the figure of the fisherman is described. The lyrical voice portrays the perfect man, which is a traditional Irish man. The fisherman is a freckled man, just like most men in the west of Ireland, and wears the clothes that are worn normally where he lives. The lyrical voice, in first person, states how he/she observes this man as he goes to a hill. The fisherman is part of the landscape,  he is part of his own country. Notice how the fisherman is not named, he is only referred by his actions. This emphasis on the action rather in the naming represents the fisherman as a symbol. The lack of extravagance in the fisherman’s life is mirrored in the form of the poetry. Just as the fisherman’s own actions, the form of the stanza shows lack of pretension. The lines in this first stanza are monosyllabic and there is an ABAB rhyme scheme.

The living men that I hate,

The dead man that I loved,

The craven man in his seat,

And no knave brought to book

Who has won a drunken cheer,

The witty man and his joke

Aimed at the commonest ear,

The clever man who cries

The catch-cries of the clown,

The beating down of the wise

And great Art beaten down.

In this second stanza, the poem changes its tone dramatically. Here, the lyrical voice presents a disdain for the masses and for most people that live in Ireland. The lyrical voice expresses the antipathy Yeats had for the broad public. It is mentioned that the great men are dead and the men alive are hated by the lyrical voice. There is a tone of disagreement and of discontent, expressing rage for the general people of Ireland. According to Yeats’ own opinion, the general public was disrespectful to art and was generally inadequate. Here the lyrical voice makes a strong criticism of Irish men and portrays Yeats’ vision at that time. Notice how he ends the section by saying that “And great Art beaten down”. In this second stanza, half rhymes are used, sounding dissonant and mirroring Yeats’ vision of most of  the Irish men. At the end of the stanza, there is a dramatic and a rhetoric climax to portray the dissatisfaction that the lyrical voice has towards the actual Irish population.

Maybe a twelvemonth since,

In scorn of this audience,

Climbing up to a place

Where stone is dark under froth,

And the down-turn of his wrist

When the flies drop in the stream;

A man who does not exist,

A man who is but a dream;

And cried, ‘Before I am old

I shall have written him one

And passionate as the dawn.

This third and final stanza depicts a new tone in the poem. The lyrical voice acquires a thoughtful and introvert mood. The ideal man, the fisherman, is described once again, but, this time, the lyrical voice admits that he doesn’t exist. He said that he began “imagining a man” and proceeds to repeat the same description he used to characterize the fisherman in the first stanza. This time, however, the fisherman is described in much more detail than in the first stanza. The lyrical voice shows a great admiration for the fisherman’s physical skills and he thinks that he does incredible things with his hands; just as writers do with their poetry, the fisherman expresses his greatness in his own skill, which is fishing. The poem ends with the lyrical voice’s thoughts towards art and life. The lyrical voice uses his art, poetry, to express his message; he believes in art as his own weapon. This voice, as Yeats himself, looks for a defense against mundane world, which is found in poetry (“Before I am old/ I shall have written him one/ Poem maybe as cold/ And passionate as the dawn”). With these final lines, the elegiac tone of the poem is strengthened, acquiring a new significance after the portrayal of the fisherman and of the Irish society.

William Butler Yeats was an Irish poet and one of the most important literary figures of the 20th century. He was born in 1865 and he died in 1939. Throughout his life, he also established the Abbey theater and served as a public Irish senator for a number of years. William Butler Yeats is well known for being a driving force behind the Irish literary revival. This movement is characterized for the flowering of Irish literary talent and the renewal of the Irish literary tradition in the late 19th century and the beginning of the 20th century. The Irish literary revival was led by Yeats itself and by Lady Gregory and Edward Martyn, among many others. Yeats’ first volume of poetry was published in 1889 and the last one was published in 1935. The rest of his poems were published after his death in 1939. In 1923, William Butler Yeats was awarded with the Nobel Prize in literature. He is one of the few Irish men who got this prestigious award. 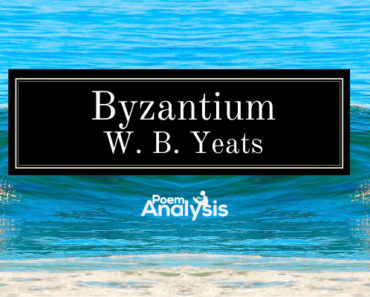 Julieta has a BA and a MA in Literature and joined the Poem Analysis team back in May 2017. She has a great passion for poetry and literature and works as a teacher and researcher at Universidad de Buenos Aires.