William Carlos Williams was born in Rutherford, New Jersey in September of 1883. His father was English and his mother was Puerto Rican and French. As a young man, he attended Horace Mann High School, this was where he first started writing poetry. It was his intention, even at this young age, to become both a doctor and a writer. After his primary and secondary education, he was sent to school in a town near Geneva, Switzerland, and then later to the Lycée Condorcet in Paris. This school was founded in 1803 and educated the likes of Marcel Proust, Paul Verlaine, and Henri Bergson.

Williams eventually moved to New York where he attended the Horace Mann School. He was later admitted 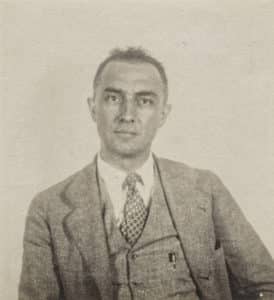 into the medical school of the University of Pennsylvania. He became close friends with fellow poet Ezra Pound during this time period. He graduated from this institution in 1906. It was three years later that Williams published his first book of poetry entitled, Poems. A few years later he married Florence Herman. Together they moved back to Williams’ hometown of Rutherford.

In 1913, with the assistance of Ezra Pound, Williams published his second collection, The Tempers. One year later Williams’ first son, William E. Williams, was born. He was followed by a second son in 1917. During the 20s Williams broke from the Imagist movement and garnered a significant amount of criticism from his peers and colleagues. A number of well-known writers, such as H.D. and even Pound himself, considered some of Williams’ works to be disjointed and incomprehensible. On the back of this criticism, one of Williams’ most important books, Spring and All, was published in 1923.

Throughout his career, Williams worked as both a family doctor and poet. During the 1930s the tone of Williams’ works changed. Up until this point he was known for his celebration of the world in the style of the Imagist poets. Then, within the darkest parts of the Depression, his work focused on the wrongs of the world.

In 1949 Williams won the first National Book Award for poetry and was named Consultant in Poetry to the Library of Congress in 1952. His term was cut short though during the years of McCarthyism. In the late forties, Williams suffered a stroke. He never fully recovered as a second stroke sent him into a deep depression. Williams was confined to a hospital in 1953 and he died ten years later in March of 1963.