Danse Russe by William Carlos Williams is a lighthearted poem in which the poet dances naked before a mirror. It is a moment of individual bliss, framed by a beautiful morning sunrise and the ability for WCW to be alone with his thoughts. 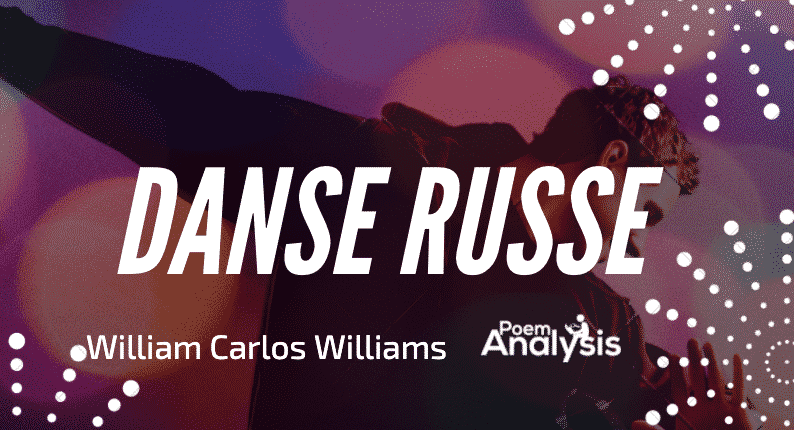 While William Carlos Williams’ wife is still sleeping, he creeps out into another room and begins to dance in front of a mirror while completely naked. The sun is shining through the windows, it is a beautiful day, and WCW takes this moment of solitude to joyfully prance around his room. He admires his body and then pronounces himself ‘the happy genius of my household’. Danse Russe is comic, enjoyable and lighthearted, with Williams overcoming the lack of connection he tends to feel with others and focusing on his own sense of self.

Danse Russe by William Carlos Williams is written entirely in free verse, without any form or rhyme scheme or iambic pattern. This free-flowing form reflects the content of the poem, with Williams’ dance around the ‘North Room’ of his house being reflected in the flowing poetic structure. The final two lines of the poem are split from the rest, emphasizing the moment in which he comes to the conclusion about his state of being truly happy.

Danse Russe is French for ‘Russian Dance’, a popular sequence stemming from Tchaikovsky’s “The Nutcracker”. The dance itself is expressive and dynamic, with lots of jumping and squatting – very lively and exciting. When considering that Williams is performing this dance completely naked, the poem takes on a further air of comedy.

The poem begins by focusing on the conditional ‘if’, allowing for the creation of a hypothetical situation in which this whole poem takes place. Williams is proposing the question that if he rises before anyone else is awake and dances around the house naked, ‘who shall say I am not the happy genius of my household?’.

The hypothetical situation that Williams proposes engages directly with the poet’s own body, dancing around the house. Due to this, throughout the poem he employs the first personal pronoun, ‘I’, furthering the sense of dependence by using a pronoun that emphasizes his individuality.

The double reference to ‘sleeping’, both in regard to ‘my wife’ and ‘ the baby and Kathleen’ provide a contrast to Williams’ expressive Danse Russe, furthering the comedy of the poem. It is a funny contrast to think about the rest of the household asleep, unaware of the poet dancing nakedly around the house without their knowing.

Williams’ reference to ‘Kathleen’ is discussing Kathleen McBride, Williams’ nanny. In doing this, we understand that the poet is placing himself as the voice of the poem, it is about his crazy dancing around the house -something he wants the reader to acknowledge.

The early lines of the poem continue to contextualize the setting Williams is building. It is sun-rise, the ‘silken mists’ combine with ‘shining trees’ and ’flame white disc [sun]’ to create a picture of natural beauty. The harmonic scene creates a picturesque morning in which Williams performs his dance. The solitude and quiet of a ‘morning’ further the ‘lonely’ sense of Williams, the poet enjoying this moment completely alone in the stillness of the early sun.

The use of a hyphen after ‘trees, -‘ creates a metrical pause, almost as if Williams is taking a moment to enjoy the beauty of nature. This is the longest pause thus far in the poem, also acting as a natural bridge to change topic, Williams’ following lines focusing on his dancing.

Williams is in his ‘North Room’, where he begins to ‘dance naked’. The word ‘grotesquely’ could suggest repulsion, but instead I argue that it is more so expressing the careless and vulgar way of the dancing. Williams does not really care what he looks like, this dance is for his own enjoyment. While someone looking in would indeed find that Danse Russe naked ‘grotesque’, he will do it anyway – it’s his house and his morning enjoyment.

Williams makes a spectacle of the dance, ‘waving my shirt round my head and singing softly to myself’, both capturing the scene both physically and aurally. The focus on ‘singingly softly’ uses sibilance to convey the whispering nature of his speech, the aural qualities of the words culminating to further their inherent meaning.

The three lines of speech within the poem, with Williams talking to himself ‘I am lonely, lonely’ is polysemous. On one hand, this moment could be expressing an element of sadness, with the poet not relating to others of the same caliber as him in his workplace. Indeed, the poet was a pediatrician and has been noted to not connect with other men of his job, nor with other doctors for the difference in specialisation.

On the other hand, the focus on loneliness does not have to inherently be a negative idea. The moment of solitude that Williams has encountered is something that he sought after, wanting a moment to himself at the start of his day. Indeed, the final line of his speech, ‘I am best so!’, with the coupled exclamation mark, suggests that Williams is actually happy with his moment of solitude. The idea of being alone does not impact the poet as solitude is something he enjoys.

Williams goes on to admire his body, his aging figure not worrying him at all. Similarly to how there was a hyphen to insinuate Williams taking in the magnificence of the day, he does this again after describing his own body – both admiring it and allowing the poem to casually change topic.

The final two lines complete the hypothetic situation of the poem, with Williams arguing who ‘shall say I am not the happy genius of my household?’. The poet is happy with the life he has built for himself, his expressive dancing being a manifestation of the joy he feels. Williams challenges anyone to look at this scene of naked dancing and find fault – the poet certainly cannot.