The Last Words of my English Grandmother by William Carlos Williams

‘The Last Words of my English Grandmother’ was first published in an extended form, in 1924. It was revised and shortened to the version we know today in 1939. It is known that Wiliams did in fact have a grandmother from England but whether this poem is an accurate depiction of her last moments is not clear. 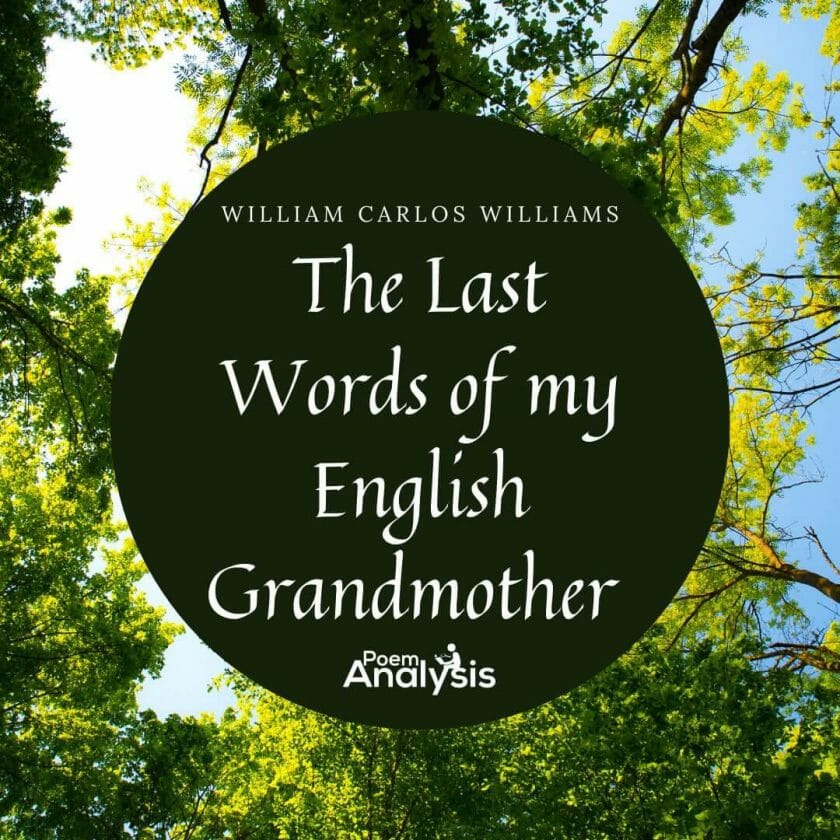 Explore The Last Words of my English Grandmother

‘The Last Words of my English Grandmother’ by William Carlos Williams is a moving poem that depicts the final moments of an old woman’s life.

The speaker describes through dialogue and direct descriptions of his grandmother, what her world is like. She’s near death and has been suffering in a sick room, unwilling to go to the hospital. He finally calls an ambulance and she is taken out of the house against her will. The grandmother dies on the way to the hospital after expressing frustration with the world of the living.

‘The Last Words of my English Grandmother’ by William Carlos Williams is a ten stanza poem that is separated into sets of four lines, known as quatrains. These quatrains do not follow a specific rhyme scheme or metrical pattern. This is a technique known as free verse. But, it does not mean that the poem lacks rhyme, rhythm, or literary devices.

Williams makes use of several literary devices in ‘The Last Words of my English Grandmother’. These include but are not limited to caesura, alliteration, and enjambment. The first, caesura, occurs when a line is split in half, sometimes with punctuation, sometimes not. The use of punctuation in these moments creates a very intentional pause in the text. A reader should consider how the pause influences the rhythm of one’s reading and how it might precede an important turn or transition in the text. For example, line three of the third stanza. It reads: “I’m all right–I won’t go”.

Alliteration occurs when words are used in succession, or at least appear close together, and begin with the same sound. For instance, “bed” and “blind” in stanzas one and two and “comfortable” and “clear” in stanza seven.

Another important technique commonly used in poetry is enjambment. It occurs when a line is cut off before its natural stopping point. Enjambment forces a reader down to the next line, and the next, quickly. One has to move forward in order to comfortably resolve a phrase or sentence. For example, the transitions between lines two and three, and three and four, in stanza five.

There were some dirty plates

and a glass of milk

to cry for food,

In the first stanzas of ‘The Last Words of my English Grandmother,’ the speaker begins by describing the setting. This place, his grandmother’s house, is dirty and “rank”. The bed is “disheveled” and the plates sitting on the table are “dirty”. It has fallen into disrepair and immediately presents the reader with an environment that is far from desirable, especially for someone who is elderly and ill.

In the second stanza, there are some good examples of enjambment as the poet transitions from the first line to the second and third. In these transitions, he describes his grandmother at that particular moment. She is depicted less like a human being and more like a “Wrinkled” creature. She is “blind” and very obviously in need of assistance to get on with day to day life. Every once in awhile she’d wake up and “cry for food” like a young child.

Gimme something to eat–

Let me take you

to the hospital, I said

and after you are well

The third and fourth stanzas of ‘The Last Words of my English Grandmother’, although not in quotation marks, contain the words of the speaker (the grandson) and his grandmother. She demands something to eat, claims that she’s being starved, and then refuses to go to the hospital. There is a good example of caesura in the third line of this stanza. It creates a rhythm that helps to mimic the patterns of the grandmother’s words. She is responding to the facial expressions and words of her grandson.

His words come through in the fourth stanza. He wants to take her to the hospital but it’s not something she has any interest in participating in.

you can do as you please.

her to the stretcher–

Is this what you call

The last line of the fourth stanza of ‘The Last Words of my English Grandmother’ is enjambed, leading a reader into the fifth stanza where the speaker tries to convince his grandmother to go to the hospital where she can get better care. Time jumps forward as suddenly the “ambulance men” are there to take her away. She’s leaving against her will or as she’d say, doing what “you please” rather than what she wants. The dialogue is again split between stanzas, allowing a reader to move quickly from line to line.

By now her mind was clear–

The second line of the seventh stanza of ‘The Last Words of my English Grandmother’ is interesting. It informs the reader that the grandmother’s mind is not always “clear”. This creates some background to the poem that might help a reader paint a mental image of what the relationship is like. Now that her mind is clear, she speaks angrily at the men and her grandson.

The grandmother’s dignity comes through in these lines. She has something that these young men do not, wisdom from her many years on the earth. But, despite this and all she has experienced, she’s on the way to the hospital against her will.

we passed a long row

of elms. She looked at them

of them and rolled her head away.

In the ninth stanza of ‘The Last Words of my English Grandmother’, the speaker describes how they passed along rows of “elm” trees. This feels like it could be a contemplative and peaceful moment. She stares out the window in silence, the first time that she has stopped talking since she woke up at the beginning of the poem.

She asks her grandson in the last stanza what “those / fuzzy looking things” are out there. At first, this strange description is confusing but it becomes clear very quickly that they are trees and her mind has become clouded again. She’s seeing the world through a haze and losing touch with the simple facts of life. In another context, this line might’ve been funny, but considering that the grandmother is very close to death and is suffering from blindness and dementia, it is moving.

The poem concludes with the grandmother rolling over and declaring that she is tired of looking at the trees or experiencing this confusion. Those are the “last words” that are referenced in the title. It feels as though, to some extent, she chose to die in that moment. She’s ready to leave this world and enter into another.