‘The Red Wheelbarrow’ by William Carlos Williams depicts, in very simple language, a red wheelbarrow outside in the rain.

‘The Red Wheelbarrow’ by William Carlos Williams might at first seem like a bizarre poem about a meaningless “wheelbarrow.” Upon deeper consideration, however, the reader can uncover layers of depth that speak of disguise, appreciation, and usefulness that can be applied outside of the poem—like in the relationships we have with companions. Basically, from this story of “a red wheelbarrow,” we can realize that some of the most crucial elements in our lives can go overlooked, and we can use that information to show more appreciation to those who merit it. 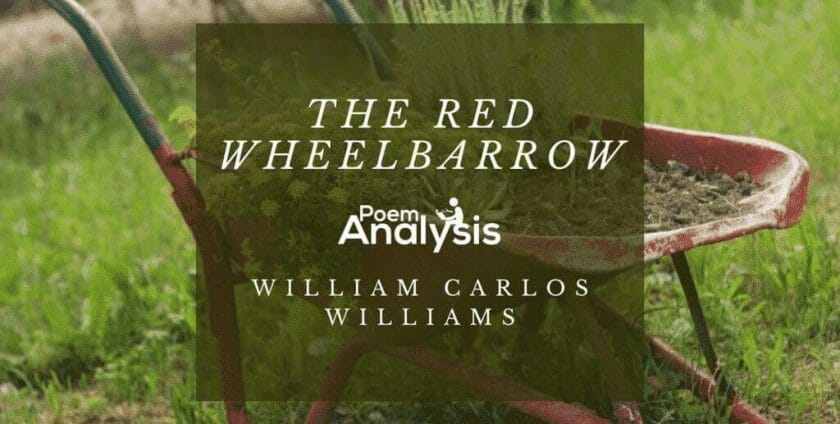 ‘The Red Wheelbarrow’ by William Carlos Williams depicts, in very simple language, a red wheelbarrow outside in the rain.

As an imagist poem, The Red Wheelbarrow is doing exactly what its supposed to. There is nothing “extra” about this piece. It is incredibly direct while also making use of memorable images that help the reader connect with what’s being described.

You can read the full poem The Red Wheelbarrow here.

In ‘The Red Wheelbarrow’ Williams engages with themes that include sentimentality and nostalgia, as well as nature. The latter can be expended to include human beings and what they create. The wheelbarrow is, by Williams’ own depiction, an incredibly important tool. He sees it as something upon which practically the whole world hinges. through his focus on the wheelbarrow, Williams is also asking the reader to consider nature and humankind’s connection with it. It is a tool that allows for rural and farming communities to make a living and support their families day to day.

He presents this single red wheelbarrow as something of high importance. He wonders in awe in regards to its various uses and its ever-present nature. By taking a close, albeit brief, look at the wheelbarrow he is asking the reader to do the same. To look closely and take note of the value in things that we normally take for granted.

‘The Red Wheelbarrow’ by William Carlos Williams is a four stanza poem that is separated into sets of two lines, known as couplets. These lines are extremely short and unusual. The first line of each stanza has three words and the second line of each only one. Williams chose to write this piece in free verse. This means that there is no single pattern of rhyme or meter at work in the text. The diction is conversational and simple, creating a calm and casual tone.

Williams makes use of several literary devices in ‘The Red Wheelbarrow’. These include but are not limited to examples of alliteration, juxtaposition, and imagery. The latter is one of the most obvious and important techniques at work. By using images clearly and succinctly, Williams enures that readers connect with the sentiments that he’s interested in.  Juxtaposition is another interesting and important technique that helps to convey the meaning behind ‘The Red Wheelbarrow’. the clearest example of this technique is the wheelbarrow itself, which in a non-poetic context is unimportant and the importance that Williams bestows on it. He depicts it as the hinge upon which the entire world rests.

Alliteration is a formal device that is concerned with the use and reuse of words that start with the same consonant sounds. For example, “rain” and “red” as well as “barrow” and “beside”. Each example takes on a greater significance in the poem due to the overall brevity of the text.

Analysis of The Red Wheelbarrow

The structure of ‘The Red Wheelbarrow’  is remarkably fitting for the commentary that is taking place regarding the “red wheelbarrow”. Specifically, no word of this set of lines (or of the lines to follow) is capitalized, which shows a lack of visible importance for everything said. Even with the beginning of a sentence with “so,” there is no capitalization. This speaks of how unadorned and overlooked a “wheelbarrow” can be, though its uses are many. No doubt, the “wheelbarrow” can be utilized as a grand tool for manual labor, but when someone sees it, there is little significance to note, like a lowercase tool that is surrounded by things that seem more important. Still, “so much depends upon” this tool that the lack of visible grandeur is somewhat misleading, just as the lowercase lettering can be a misleading detail that hides the fact that what is presented is, in fact, a full sentence.

As well, the structure of ‘The Red Wheelbarrow’ is very reliable. Each first line of every set is three words, and the second line of each set comes with just one word. This shows that the “wheelbarrow” is sturdy and reliable in its nature to be a sound tool. Worth noting as well is that the only way that this basic three-to-one-word structure for line sets can be accomplished is for the poet to separate “Wheelbarrow” into two words. This manipulation of the wording to fit into the structure indicates that this tool can be used in various manners like it too can be made into the right tool for jobs even when it logically is not a perfect fit. Essentially, then, this overlooked “wheelbarrow” is multifaceted and dependable, even if circumstances logically stand outside of its normal reach.

That the narrator says “upon” instead of “on” is telling as well since it comes with an elegant connotation like something out of a fairy tale. Given that fairy tales often include royalty and disguises—like Snow White’s stepmother as an old lady, Cinderella at the ball, and Princess Aurora in a quaint cottage—this hints that there is something above and beyond at work with this “wheelbarrow.” Like these fairy tale characters, there is more to this “wheelbarrow” than meets the eye.

One final note about these beginning lines is that this “wheelbarrow” is “red.” This is such a connected color for a “wheelbarrow” that it borders on cliché, and if a person pictures it in front of a “red” barn, the “wheelbarrow” could easily blend in. In this, the narrator has addressed the “wheelbarrow” in a manner that makes it very typical in coloring, and something that likely does not stick out from its surroundings. Basically, it is doomed to be overlooked though “so much depends upon” it.

These lines continue with the same structural patterns of word counts and no capitalization, though it does add a bit of elegance to the noted “wheel barrow.” In particular, the “wheel barrow” is “glazed with rain water.” While this speaks to the level of disregard the “wheelbarrow” endures to be left out to the elements, the verb choice of “glazed” comes with a connotation of a shining covering. Though it comes from neglect, in a way, this is a glimmering sheen that adds something to the visual of the “wheelbarrow.” It is no longer just “red” and ordinary, but “glazed”—shining and more likely to gain attention.

However, that attention is stunted with the final line of the poem when the poet notes that this “wheelbarrow” is “beside the white chickens.” As was noted earlier, “a red wheelbarrow” can certainly blend into a typical farm lifestyle, particularly when something as bright as a “white chicken” is there to catch a viewer’s eyes. The irony, though, is that this “wheelbarrow” could be used to help tend to the chickens as well, such as carrying their food. Regardless of this usefulness, the “wheelbarrow” could be overlooked in favor of the “chickens” and their brighter coloring.

When applied to human nature, this poem could indicate that there are people around us who are essential to our being, but they go overlooked as well for various reasons. However, their influence on our lives makes it so they should glisten more brightly, like a “glaze” that comes from “water” on the “wheelbarrow.” In essence, this poem could be a lesson, by comparison, to look for those who truly matter in order to make sure we do not take them for granted. Otherwise, the lack of appreciation could continue to the relationship’s end, like the period is the only punctuation mark within this poem.

It is noteworthy, though, that nothing in the poem indicates that the “wheelbarrow” will stop functioning or lower its quality because of the lack of appreciation, other than the possibility of becoming rusted from the “water,” so there is little hint of warning of losing someone who is not cared for in a right manner. It is, rather, the very essence of allotting the due amount of appreciation that makes the concept worth putting into action. Overall, there is a great deal to learn about how to treat our companions found with this “wheelbarrow” so that our friendships do not become tainted and rusty.

William Carlos Williams was born in 1883, and he was both a writer and a doctor. His background includes various ancestries, such as French, Puerto Rican, Jewish, and Spanish, and he won a Pulitzer Prize for Pictures from Brueghel. He passed away 1963—the same year he earned that Pulitzer.

Connie L. Smith spends a decent amount of time with her mind wandering in fictional places. She reads too much, likes to bake, and might forever be sad that she doesn’t have fairy wings. She has her BA from Northern Kentucky University in Speech Communication and History (she doesn’t totally get the connection either), and her MA in English and Creative Writing. In addition, she freelances as a blogger for topics like sewing and running, with a little baking, gift-giving, and gardening having occasionally been thrown in the topic list.
Subscribe
2 Comments
Newest
Oldest Most Voted
Inline Feedbacks
View all comments