William Cowper was born in Berkhamsted, Hertfordshire in November of 1731. He was the first of seven children born to mother Ann née Donne and father, rector, John Cowper. Unfortunately, Cowper and his brother were the only two of the seven to live into adulthood. All the other Cowper children died in infancy. Ann herself died in childbirth in 1737, after giving delivering Cowper’s only surviving brother, John. Her premature death made a deep impact on the young boy, who was only six at the time. Cowper would continue to think of his mother and write poetry dedicated to her memory, as he aged.

Although he lost his mother, Cowper’s family life was healthy. He was close to a number of his relatives, and his mother’s brother helped to foster his love for literature. His family was also the source of his first books which included works by John Bunyan. 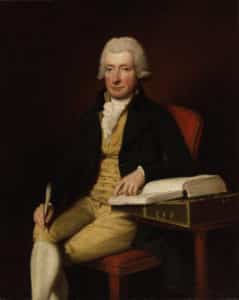 When Cowper first began his education he attended a local boarding school called, Dr. Pittman’s. He would move through a number of different institutions, but he would eventually land at Westminster School. He spent much of his time at Westminster studying Latin as well as the works of Homer. These were passions that would stay with him for the rest of his life. Homer in particular became quite an important part of his writing career. School was not always easy for him though as he was frequently bullied by the other children.

His education continued in 1750, at the Middle Temple in London, where he intended to acquire his law degree. His studies were punctuated by the time spent at his uncle’s house. It was during this period that he first fell in love with his cousin Theodora Cowper, who he decided to marry. Her father did not approve of the match and the relationship came to an end in 1755. Like many elements of his personal life, this saga made its way into Cowper’s poetry. Details of the love between the two appeared in a sequence of poems titled, Delia. The end of the brief engagement left Cowper feeling distraught. This was only furthered by the death of his father in 1756.

After continuing his studies, Cowper was offered and accepted a clerkship of the journals in the House of Lords. This prospect came to the young man due to a family connection and the need to supplement the meager wealth left behind by his father. The position required Cowper to complete an examination, but the strain of this responsible broke the poet and sent him into terrible bouts of depression and mental instability, during which he attempted suicide. The entire ordeal forced him to enter Nathaniel Cotton’s Collegium Insanorum at St. Albans.

He soon left the hospital and settled in the town of Huntingdon with the Unwin family. They grew very close and eventually moved with them to Olney. It was here that he was invited to contribute to a hymnbook that was titled, Olney Hymns. It was not published until 1779 but contained some of Cowper’s most recognizable Hymns, including: ‘Light Shining out of Darkness,’ and ‘Praise for the Fountain Opened.’ In a terrible accident, the husband, Morely Unwin was killed in a fall from his horse, but he continued to live with the wife, Mary. He briefly considered their marriage prospects.

In 1773, Cowper suffered another breakdown, believing that he was going to be condemned to hell and must kill himself. His close friend Mary Unwin helped him through this period. The poet would soon move to London where he wrote a satire titled, ‘The Progress of Error,’ along with a number of others. These pieces were eventually published together in 1782. The following period of Cowper’s life was marked with more publications and battles with his own mental health. He wrote the ballad, ‘The Journey of John Gilpin,’ which was printed in 1783. He was also forced to move frequently and only later settled with Mary Unwin in Norfolk. She was experiencing health problems of her own at the time and died in 1792. This sent Cowper into a despair from which he would never recover.

He continued to persevere through writing though, editing a previous edition of translations of Homer he had published. It was considered to be the most significant since those written by Alexander Pope. He also wrote the dark poem, ‘The Castaway.’ It was eight years later that Cowper contracted dropsy, also known as edema, a disease that causes a painful swelling under the skin and died. He is buried in the chapel of St. Thomas of Canterbury in East Dereham and is memorialized through a window in Westminster Abbey.

After his death, Cowper came to be considered as one of the best letter-writers in the English language and a volume of his correspondence was published in 1823.

A farce is a genre of comedic literature. It uses exaggerated and outrageous situations to create humor and make the audience laugh.
Full Description | Glossary