William Dunbar was born sometime between 1459 and 1460 in Morayshire, Scotland. He was the son of Sir Archibald Dunbar. It is likely that Dunbar attended St. Andrews. The first true record of Dunbar occurred upon his completion of a BA in 1477 and an MA in 1479. At some point he entered the church and traveled as a Franciscan novice throughout England and France. 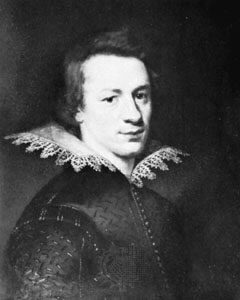 In the later part of the 1400s, some records show him as accompany an embassy to Denmark and then later to England with the Bishop of Moray. In the early 1500s he is recorded as being in England. This was likely in connection to plans for the marriage of James IV and Margaret Tudor. The marriage did not take place until 1503.  It was around this period of time that he came into contact with the King and was granted a pension of £10.

From this point on he was employed by the court of King James. This position allowed him to receive a pension of 80 pounds every year. It is unclear what exactly his duties were, except to serve the King.

The last solid record of Dunbar’s life occurs in May of 1513 within the Treasureer’s Accounts. It notes the payment of his pension. It was this same year that King James died at Flodden. By the time the accounts are taken back up two years later Dunbar is no longer listed. Within the work of another poet, writer around 1530, Dunbar is mentioned as being deceased. Contemporary historians place his death around this time period.

Since his death one hundred and one points have been attributed to Dunbar. The majority of these piece are occasional, meaning they were written as works of satire or complaints. The best known of these is, Lament for the Makaris, a prayer in memory of medical Scots poets. It is his humorous works which truly show the poet’s skill. The best of these is, The Ballad of Kynd Kittok.

Throughout his writing career Dunbar often penned petitions to the king. These written statements were completed in an effort to maintain some new personal advancement. His requests carried from asking to be appointed to an office in the church to inquiring whether he could get a new clothes for the holidays.

Due to his position as an ordained priest of the pre-Reformation church, Dunbar also spent time on religious and moral works. Some of these include, Ane Ballat of Our Lady and Of Deming.