William Morris was born in March of 1834 at Elm House in Walthamstow, Essex, England. His father, after whom he was named, was a financier, and his mother, Emma Morris, was a descendent of a wealthy family from Worcester. His parents were members of a wealthy middle-class and he was the third child born to them. Their first-born child Charles died at four days old, but was followed by twin girls, Emma and Henrietta. After William was born, his mother gave girth to six more children. 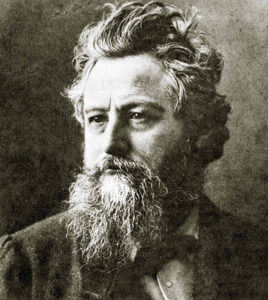 Morris spent most of his childhood at home. It was during this period that he developed a passion for literature. By the time he was six he moved to Woodford Hall with his family. It was an estate on 50 acres of land in which he fished and gardened. When he was nine years old, Morris was sent to Misses Arundale’s Academy for Young Gentlemen, a preparatory school nearby to their home. He would eventually board at the school, an experience he later claimed to had disliked.

In 1847, Morris’ father died, this meant the family had to depend on the copper mines to support them. This led to their move to Water House, a small property which was easier and cheaper to maintain. A year later he began his studies at Marlborough College in Wiltshire. This was another experience which set poorly with the young man. He was intensely homesick and was often bullied by the other kids. The school was Anglican, and allowed for Morris’ confirmation into the faith in 1849 by the Bishop of Salisbury. Two years later he was removed from the school and privately tutored at another nearby institution.

In 1852, Morris entered Oxford University’s Exeter College. Once again, he was displeased with the experience. He found the classes, and the way in which they were taught, boring. By this point he had developed a strong interest in Medieval history and architecture. He appreciated the chivalric values of the Middle Ages and the pre-capitalist communities.

Morris’ later writings were heavily influenced by the critic John Ruskin, whose work spoke on the aesthetics of architecture. He would adopt a number of Ruskin’s philosophies towards the industrial and decorative arts. Morris graduated from Oxford with a BA and immediately became an apprentice to George Edmund Street. He eventually moved to London where he met writers and artists such as Robert Browning, Arthur Hughes and Ford Maddox Brown. Morris grew tired of architecture, and his apprenticeship, and spent some time painting, working alongside Dante Gabriel Rossetti and Edward Burne-Jones painting murals.

In March of 1857, William Morris’ first book of poetry, The Defence of Guenevere, was published. It did not sell well and the reviews were lacking. It would be eight years until he published another volume. It was later that same year that Morris met Jane Burden, to whom he became engaged in 1858. They were married in April of 1859.

The couple moved to Upton, ten miles from central London. These years saw Morris drift away from painting. He was unable to realize the style, or develop his skills to, the level he wanted. The couple’s first daughter was born in 1861 and a second followed the next year. The family moved to Bloomsbury in 1865. It was here that he founded his firm Morris, Marshall, Faulkner & Co in 1861 with Burne-Jones, Rossetti, Webb, and a number of others. These men were artists and craftsmen whose work became quite popular.

In 1871, Morris moved again, this time to Kelmscott Manor, Oxfordshire. While there, he spent time translating the Icelandic sagas with Eiríkr Magnússon. He also published the poems and novels which would become his most popular. These included, The Earthly Paradise, News from Nowhere and the romance, The Well at the World’s End.

By the 1880s, William Morris had become a fervent Marxist. He joined the Democratic Federation and then later left and set up the Socialist League. Morris often led the debate alongside speakers such as George Bernard Shaw. In the later part of 1890 he left the League and worked with the Hammersmith Socialist Society. In 1891, shortly before his death, he set up the Kelmscott Press to publish illustrated books.

During this time period he grew increasingly ill and solitary. He had developed gout and started to exhibit signs of epilepsy. By the mid 1890s, he was completely confined to his home at Kelmscott Manor. In October of 1896 he died of tuberculosis. William Morris was given an elaborate funeral after his death. His corpse was carried from Hammersmith the Paddington rail station, and then transported to Kelmscott. He was buried in the churchyard of St. George’s Church.