Every individual, who is a fan of Literature, knows about William Shakespeare. There is absolutely no one in the field of Art, who doesn’t know about him. William Shakespeare was a very popular English poet, actor as well as a playwright. He is the one, who has brought us fine scripts like Romeo and Juliet and Hamlet, and also wrote 154 sonnets. His poem, All The World’s A Stage, gained immense popularity, right when it was written and introduced to the readers of his time. 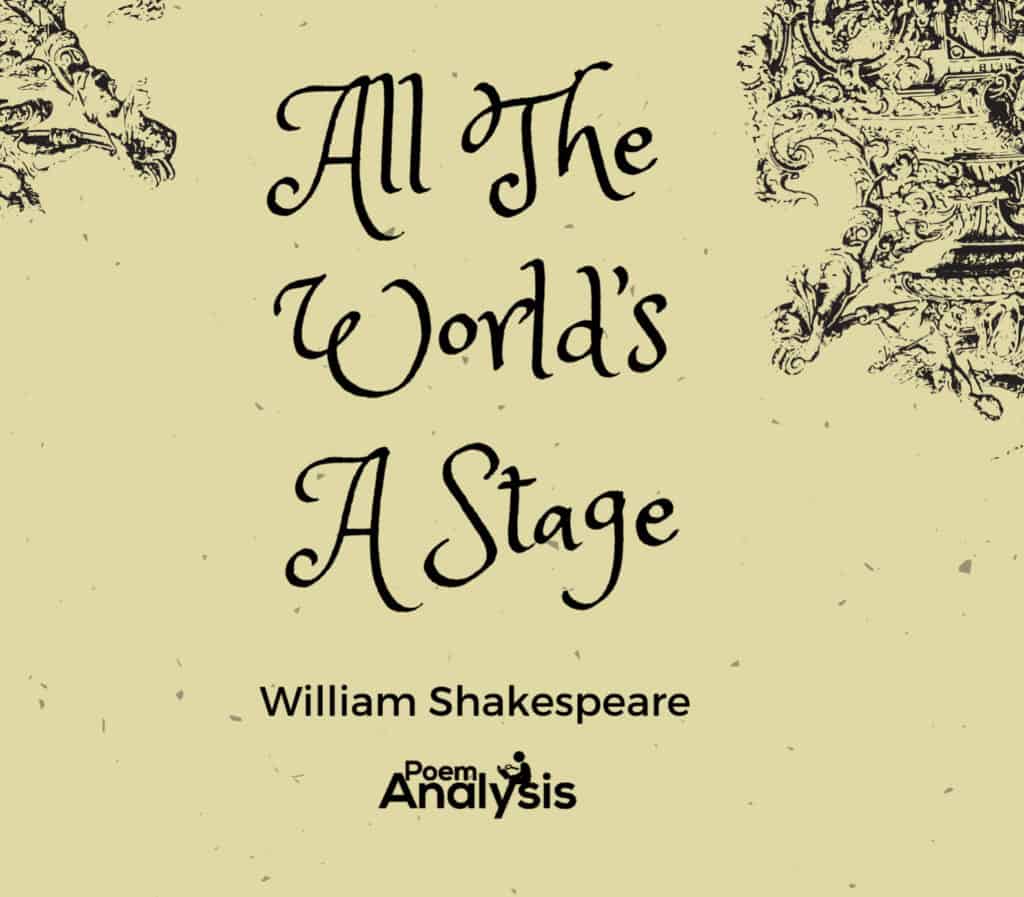 Explore 'All The World's A Stage'

All The World’s A Stage is a poem written by William Shakespeare. In fact, it was not a poem earlier, but a monologue from the maestro’s As You Like It. This monologue is said by Melancholy Jaques in Act II Scene VII. As the speech begins, seven different stages of a man’s life are all that can come into your mind. Each and every word is so beautifully written that you can actually imagine everything that is written, just like a movie running in front of your eyes.

The seven stages of a man’s life also refer to The Seven Ages Of Man. These ages are: infant, school going boy, lover/husband, soldier/fighter, justice/ability to understand the right and wrong, Pantalone (greediness and high in status) and old-age.

In this poem, Shakespeare has compared life with a stage. He has used different words to beautify the poem in a wonderful way. He has taken this concept from medieval philosophy, which showed glimpses of several different groups as the seven deadly sins for theological reasons. Theology is the study of God’s nature as well as religious belief.

All The World’s A Stage Structure

There are two major poetic devices used in this poem – simile and metaphor.

Metaphor examples in the poem: The entire poem itself is more like symbolism; men and women are portrayed as players whereas life is portrayed as the stage.

Repetition is another figure of speech used in this poem; words like sans, age, etc. are repeated.

The poet has used a narrative form to express his innermost emotions about how he thinks that the world is a stage and all the people living in it are mere players or characters. These characters go through seven different phases in their lives.

Although the poem is quoted in full below, you can also read All The World’s A Stage here at Poetry Foundation.

All The World’s A Stage Poetic Form

All the world’s a stage,
And all the men and women merely players;
They have their exits and their entrances,
And one man in his time plays many parts,
His acts being seven ages. At first, the infant,
Mewling and puking in the nurse’s arms.
Then the whining schoolboy, with his satchel
And shining morning face, creeping like snail
Unwillingly to school. And then the lover,
Sighing like furnace, with a woeful ballad
Made to his mistress’ eyebrow. Then a soldier,
Full of strange oaths and bearded like the pard,
Jealous in honor, sudden and quick in quarrel,
Seeking the bubble reputation
Even in the cannon’s mouth. And then the justice,
In fair round belly with good capon lined,
With eyes severe and beard of formal cut,
Full of wise saws and modern instances;
And so he plays his part. The sixth age shifts
Into the lean and slippered pantaloon,
With spectacles on nose and pouch on side;
His youthful hose, well saved, a world too wide
For his shrunk shank, and his big manly voice,
Turning again toward childish treble, pipes
And whistles in his sound. Last scene of all,
That ends this strange eventful history,
Is second childishness and mere oblivion,
Sans teeth, sans eyes, sans taste, sans everything.

As All The World’s A Stage begins, you are dragged to a stage. It is like you are the audience, and you are watching a drama on the stage, right in front of your eyes.

All The World’s A Stage tells you that all the men and women are mere characters in the drama, which is played on the stage (in the world). ‘They have their exits and their entrances’; this means that all the people take birth and then die after a certain period of time.

When the man enters into the world, he has seven different ages or phases to go through. When he goes through these ages, he has to play different roles. These roles depict a man as a son, his responsibilities as a brother, father, husband, fighter for the nation, etc.

The man begins his act on the stage as an infant; he pukes in the arms of his nurse and cries to be in the comfort of his mother.
The second act starts right when he turns into a school going boy, who is unwilling to go to school and unwilling to take the responsibility of being a student.

The third act , then comes when he turns into a lover; his lover is the only person he sees dancing in front of his eyes. For him, there is absolutely no other place that can comfort him, than the eyebrow of his lover.

The fourth act of All The World’s A Stage portrays the man as a soldier or a fight for the nation. His beard depicts all those strange oaths that he takes to protect his country and all the men and women living in it. No doubt he quarrels, but he also maintains his dignity to create and develop his reputation in front of others around him. This is perhaps the toughest stage in his life.

Then comes the fifth act, where he turns into justice, the one who knows what is good and what is right. At this stage, he is perhaps the best person to approach to find out who is correct and who is wrong.

The fifth stage comes into his life as he enters the stage of Pantalone, where he has a high status in society, yet he is greedy for more. This stage does not remain for long in his life.

Alas! The last stage comes for him to go through oblivion. No matter how hard he tries to remember things, he is just not able to. When he enters old-age, he turns into a child again. Slowly, he begins losing his teeth, his vision, the taste in his mouth and the love or greed for everything that he once wanted in his life.

All The World’s A Stage takes you to two stages – melancholy and epiphany. When you read about the second last and last stages of the man’s life, you realize that life is nothing, but mere play. All you need to do is take birth and leave, after performing all your duties. Why do you need all the fame, name and money? Why do you want to have everything in life, when you would have absolutely nothing at all by the end of your ‘play?’

Personally, I feel that this poem also talks about the roles of other people in your life. Just like you are playing your part, so are they! They enter into your lives to teach you something new, and leave, gifting you a bunch of memories to dwell upon.

Dharmender is a writer by passion, and a lawyer by profession. He has has a degree in English literature from Delhi University, and Mass Communication from Bhartiya Vidhya Bhavan, Delhi, as well as holding a law degree. Dharmender is awesomely passionate about Indian and English literature, and continuously read poems of many different poets.