The 10 poems on this list represent some of the best love sonnets that Shakespeare wrote. They are in honor of the Fair Youth, an unknown, beautiful young man.

William Shakespeare is generally considered to be one of, if not the, greatest writers in the English language. His works spanned thirty-seven plays, the best known of which have been performed for centuries, 154 sonnets, and five longer, narrative poems. This article focuses on ten of those sonnets, some of the best that deals with themes of love, dedication, and even obsession. These poems are multilayered, often taping into all those themes, and more, at the same time.

The first 126 of the 154 sonnets that Shakespeare wrote were dedicated to a young man, The Fair Youth. This person has never been identified. It is also not entirely clear what sort of relationship Shakespeare had, if he had any, with this young man. Some have stipulated that the speaker could be a creation and not based on the poet’s own experiences or emotions. 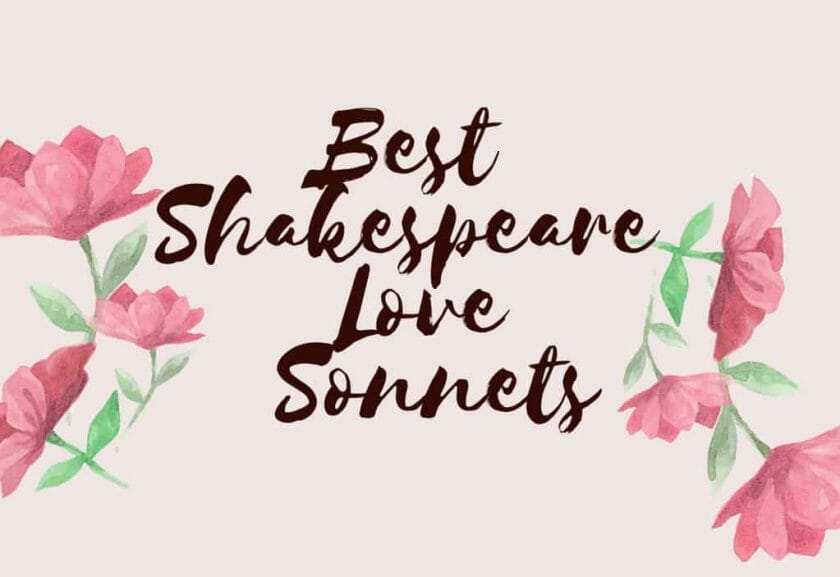 Sonnet 18: Shall I compare thee to a summer’s day?

‘Sonnet 18’ is likely Shakespeare’s best known. The speaker describes the Fair Youth as better than even the best parts of summer. He is “more lovely and more temperate.” In the last lines the speaker addresses time. The summer is temporary, it isn’t going to last. But, luckily for the listener, their beauty is. Their face (and maybe mind too) are like an “eternal summer”. This is all due to the fact that they are immortalized in Shakespeare’s poetry.

Sonnet 129: The expense of spirit in a waste of shame

Lust is the main theme of ‘Sonnet 129’. It is a symbol of the future and past longing. It is the good and the bad, the regrets, and the triumphs. It is brutal, “murd’rous”and “bloody.” It’s also sometimes despised after consummation. The speaker knows that the world knows that its lovers know that lust can be everything at once in the present, past, and future.

Sonnet 116: Let me not to the marriage of true minds

In this very famous poem, the speaker address questions like, what is love? And what is it not? He begins by talking about marriage. It is an institution that binds those who buy into it. It is solid and no one is allowed to ditch their partner when they change. Love is also a star in the sky. It’s there to direct ships lost at sea. Love is not, he decides, at the mercy of time. Unlike the rest of creation, love is unshakeable.

Sonnet 98: From you have I been absent in the spring

In ‘Sonnet 98’ the speaker describes his inability to enjoy spring due to the absence of his lover. The days have been lovely, he admits, so much so that the gloomy god Saturn played with the month of April. Despite this fact, he has not been tempted outside to enjoy the sun or pick flowers. The patterns of the lover’s beauty are everywhere the speaker looks when he looks outside. He’d rather stay in, as going outside would only involve playing with the Fair Youth’s shadow.

Sonnet 29: When in disgrace with fortune and men’s eyes

‘Sonnet 29’ focuses on the redeeming power of love. The speaker begins by mourning his own situation. He is lost, outcast, and separate from those he would like to know. Even if he spoke, no one would hear or listen to him. The speaker believes that he is not a lucky man. But, perhaps he is. He has a love that comes to him, in his mind, and improves his outlook. In the last lines, Shakespeare creates an image of a rising bird, escaping from his earthly troubles and singing to God.

Sonnet 130: My mistress’ eyes are nothing like the sun

In this very popular sonnet the speaker compares his lover’s eyes to other beautiful things. But, it doesn’t turn out well. They don’t have any similarities to the natural items he points out. Their lips are dull, their breasts aren’t white enough and they walk on the ground rather than float through the sky as a divine being. The couplet provides a twist at the end of the poem. This is known as the volta. that. His love might be not outrageously beautiful, but that doesn’t make them less important or loveable to him. People do not need to have perfume breath to deserve love.

In this poem, the speaker, who some believe to be Shakespeare himself, addresses the facts of aging and the possibility that the Fair Youth is effected. Throughout the text, the speaker compliments the Fair Youth on his beauty. He seems not to have aged the whole time the speaker has known him. Over the last three years, he has remained just as fresh and green as when they first met. But, the speaker acknowledges towards the end, he knows this can’t be the case. All people age and time moves so slowly that he just can’t see it.

‘Sonnet 1’ is the first in Shakespeare’s series of 154 sonnets. It is also the first that is dedicated to the Fair Youth and is concerned with the main themes of procreation and immortality. He addresses the youth, describing for him the process of death and how after death a child is able to continue the beauty of a parent. It is the speaker’s wish that his love, the Fair Youth, willingly give his beauty to a child so that it might not be lost after he dies.

Sonnet 65: Since brass, nor stone, nor earth, nor boundless sea

In this sonnet, the speaker addresses the impossibility of resisting time. He considers the brass, stone, etc. and determines that all of these must face “sad mortality”. The speaker asks the Fair Youth, rhetorically, how his beatify could possibly resist time when ti appears to be no stronger than a flower. It is only through his poetry, the speaker eventually concludes, that youth is going to live forever.

Sonnet 20: A woman’s face, with nature’s own hand painted

In the first lines of ‘Sonnet 20,’ the speaker begins by presenting a series of images that confuse whether or not he is speaking about a man or a woman. He tells the intended listener, who is usually considered to be a young man (the Fair Youth), that he has a face that’s as beautiful as a woman’s. It’s so beautiful that he doesn’t need to change. He also appreciates the fact that this young man wanders less, or cheats less than a woman would. The poem concludes with the speaker saying that nature made “thee” for women but that he’ll keep the young man’s love. The woman can have his body.